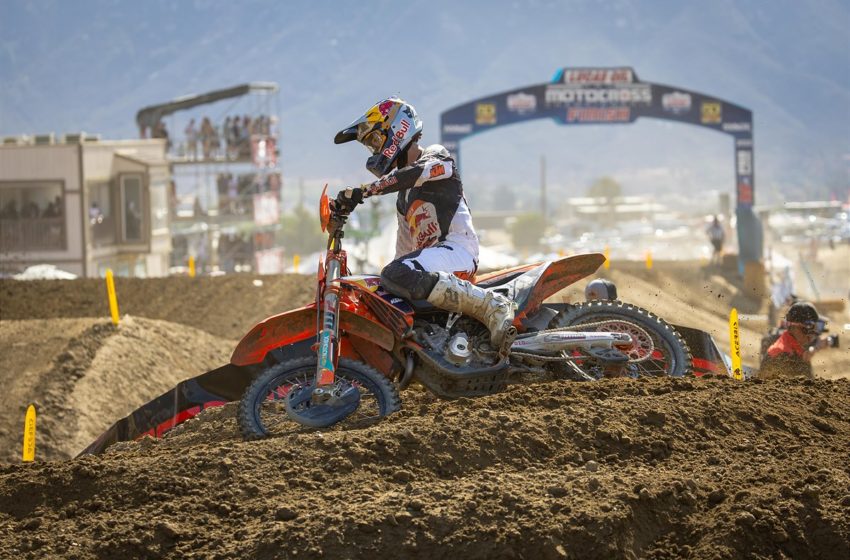 The Red Bull KTM Factory Racing team concluded a successful season in the 2022 AMA Pro Motocross Championship on Saturday with a fighting performance at the Fox Raceway II National in Pala, California. Extreme temperatures in the entire region made for an ultra-challenging day, but the team stayed consistent and finished strong with top-10 overalls across the board at Round 12.
Coming off a strong podium at the previous round, Plessinger came into the finale with high confidence, but he got caught up with his teammate Dungey at the start of Moto 1, causing him to drop back to 27th on the opening lap. He immediately put his head down and charged through the pack to bring himself inside the top 10 just after the halfway mark.
As the race got more challenging for most riders, Plessinger’s fitness and determination propelled him a few more spots to ultimately finish seventh. In Moto 2, he grabbed a ninth-place start and battled in seventh for most of the race to secure a hard-fought seventh in the moto, giving him sixth overall on the day. 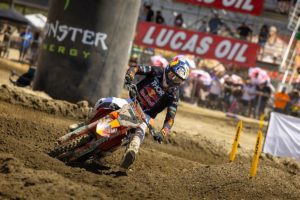 Aaron Plessinger: “It was hot today. I got the best qualifying time that I’ve gotten yet with sixth and then went out for the first moto feeling pretty good. When I got off the gate, I was behind Dungey, and unfortunately, he laid it down, and I ran right into him. I was stuck there for a second and fought back to seventh in the moto. I got off to a decent start in the second moto and then fought my way up.
I was behind Barcia and Dungey and just fell off at the end. It was hot, rough, and probably one of the more challenging races all year, but I finished the season off strong, and we’re taking the positives.
We made a lot of progress with the bike [this season], and everybody was trying to learn how I work and tick, and I was doing the same with everybody else. We have a pretty good bond, and I think it will be even better next year.”
It was a rough start to the day for Ryan Dungey, who found himself on the ground after several early issues in Moto 1 and sat back in 38th on lap one. He put his head down and climbed through the field, ultimately making a significant charge to finish 10th.
Determined to end the season on a good note, Dungey charged off the start of Moto 2, fighting into the third spot early on. He overcame one small crash in the moto to round the series with a fifth and eighth overall on the day.

Ryan Dungey: “First moto, I had a significant jump off the gate, and I stalled the bike coming into the turn, and then I got shuffled back to about fifth. In the second turn, I got into somebody and fell, so I was left to charge as hard as possible.
In the second moto, I got a decent start and tried to ride the track, pick good lines and do the best I could. I did fall in the moto, but I got fifth, which I was happy with.
It’s a long, gruelling, tough season – the first with little preparation – and I’m happy I did it. The conditions were sweltering, probably the hottest race of the year, and you just felt the heat deep in the muscles. It’s physically tough, but I felt like we managed it well.”
Red Bull KTM Factory Racing’s 450 riders Marvin Musquin made a last-minute decision to line up for the first time all summer – in the 250MX class – at the season finale. Racing in preparation for the Motocross of Nations, Musquin delivered a solid pair of 5-9 moto finishes to claim seventh overall amidst some of the most challenging conditions of the entire season.

Marvin Musquin: “I made the decision to race like a week ago. We tried a few things this week with the team and had only five days on the bike. It was strange to be back! DV, my trainer, told me it would be great training for Motocross of Nations, and that was just the goal to do the two motos. It would have been great to get better results, but it was a decent day.
The second moto, I was in the pack, and physically, it was difficult, the muscles were just not happy, but I tried my best and ended up seventh overall. it was good training.”
Max Vohland put a stamp on his 2022 season in the 250MX class with a strong Moto 2 finish at the final round. Building from his good starts last weekend, Vohland kept his KTM 250 SX-F FACTORY EDITION up front off the start, but he got pinched off and lost a few spots on the first lap.
He was up to seventh midway through the moto, but a big crash set him back again, and he ultimately finished 12th. In Moto 2, he grabbed another excellent jump off the start and came into the first turn inside the top three.
Getting pushed wide again, Vohland dropped back to 13th and worked his way back through the field to finish with an impressive sixth in the moto, despite the extreme heat.

Max Vohland: “It was a good weekend. The track was technical and hard to pass on because it’s prolonged in some corners and was pretty one-lined for the first moto. I was pushing for sixth and ended up making a pretty big mistake and went down pretty hard.
Luckily, I haven’t had that all year and I got back to 12th. I jumped perfectly in the second moto and pushed into the deep stuff again. I was back to like 13th, and I kept picking guys off. Some of them were getting pretty tired from the heat, and I ended up in sixth towards the end. It was good to end that last moto on a high note and finish the season like that.”