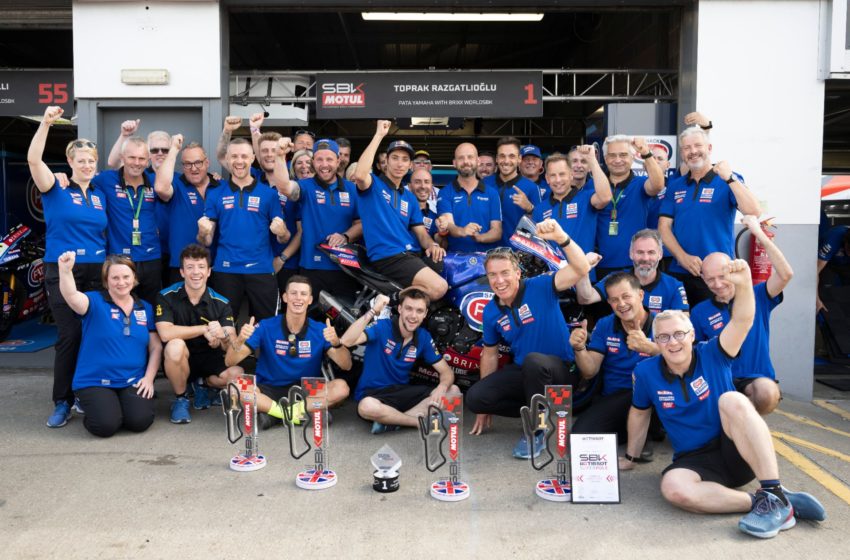 That success was extended to the FIM Supersport World Championship, as Dominique Aegerter equalled Andrea Locatelli’s 2020 record of nine consecutive wins with another double victory.

While the Yamaha R1 and R6 demonstrated their prowess at the famous British venue, Yamaha also reigned supreme off-road at Loket for the MXGP of Czech Republic round, finishing 1-2 in both the MXGP and MX2 classes.

Andrea Dosoli, Yamaha Motor Europe Road Racing Manager: “We enjoyed a brilliant weekend, with Yamaha dominating the road racing activities, taking all five victories in the WorldSBK and WorldSSP classes. I’d also like to congratulate our colleagues in MXGP and MX2, who also had some fantastic results.

We returned to Donington with more than 51,000 spectators, which was terrific. It was such an exceptional performance by Dominique and Toprak, as well as their teams, who leave the UK having scored the maximum points available.” Razgatlıoğlu was at his best at one of his favourite tracks on the WorldSBK calendar. The Pata Yamaha with Brixx WorldSBK rider fired into the lead from third on the grid in Race 1 and never looked back, crossing the line with his signature stoppie.

The Turkish rider wasn’t done there, though, with his Superpole Race victory giving him pole position for Race 2. Under immense pressure, he managed to hold onto the lead through the early stages before pulling away to seal his maiden triple win.

“On Friday, we struggled a bit, but on Saturday morning, both Toprak and the team did a fantastic job. Toprak was very focused, and the team improved the bike. We are lucky to have witnessed the most spectacular weekend with him in the championship.

The pace was amazing right through the first race, with no mistakes and a fast and consistent pace. On Sunday, we expected that our rivals would improve, but Toprak managed the races very well, even though Johnny put him under a lot of pressure.

He managed it well; every time he was overtaken, he quickly retook the lead. In the race’s second half, he increased the pace and managed this historical triple victory. We are, of course, delighted with this result. It’s crucial for the championship; we significantly reduced the gap to the top.

Toprak will now approach the next races with the self-confidence that achieving such a fantastic result is still possible. He will be even more motivated and focused in Most and the remaining part of the season.” 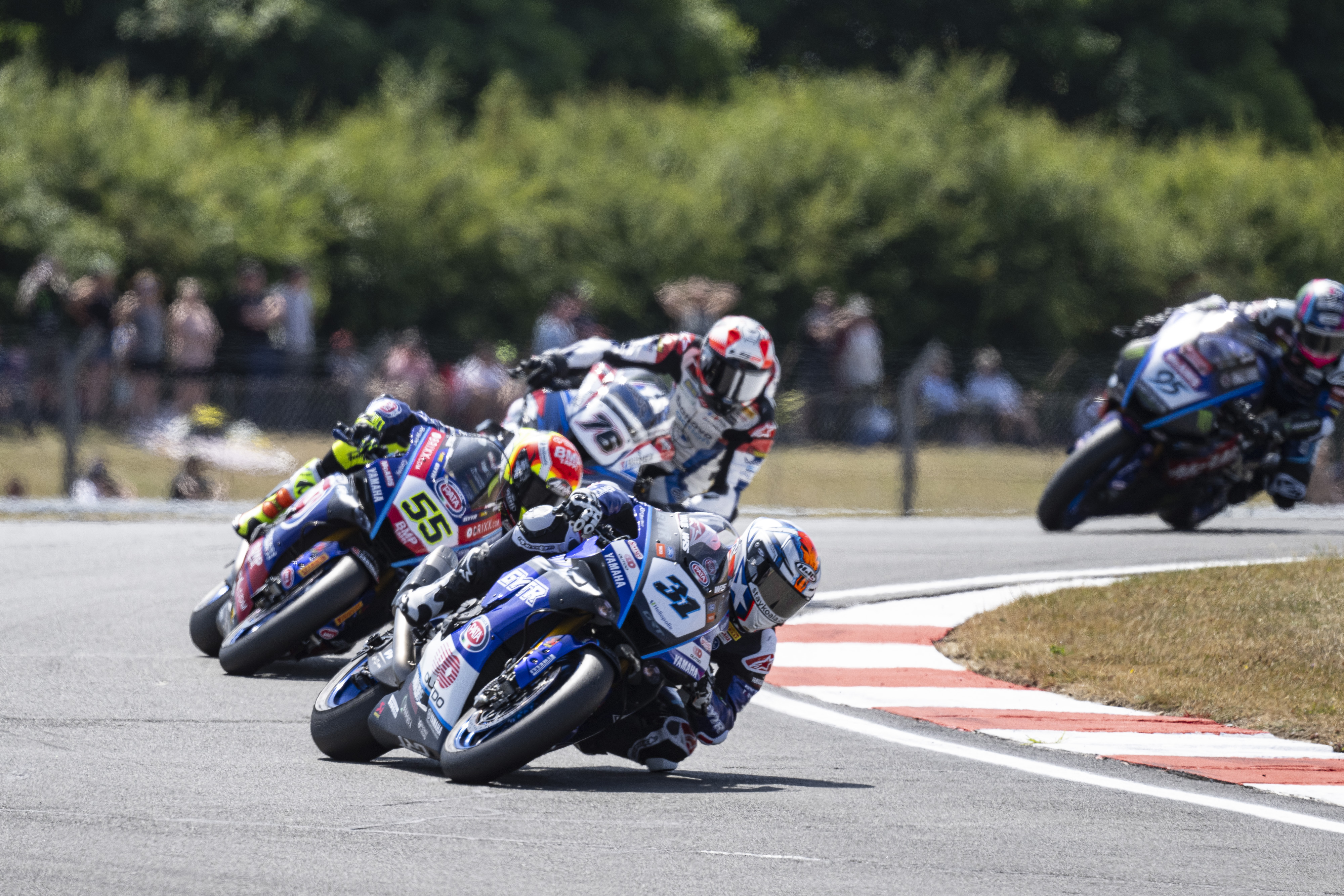 On the other side of the Pata Yamaha with Brixx WorldSBK garage, Locatelli was down on pace compared to previous rounds so far this year, although he managed to improve his gap to the front in Race 2, finishing eighth.

GYTR GRT Yamaha WorldSBK Team’s Garrett Gerloff was fastest in Free Practice 3, but a tough qualifying meant he could only manage a best result of seventh in Race 1, while teammate Kohta Nozane missed out on points. McAMS Yamaha was also in attendance, with Tarran Mackenzie scoring two points finishing in 14th and 15th on his debut.

“We have to be honest that the results shown by our other riders weren’t what they or we expected. Andrea had difficulties on Saturday, with a big gap to the winner. The guys worked hard on Saturday and Sunday morning to improve the feeling of the bike and the performance.

We know Andrea can achieve better results, and we look forward to him returning to his best in Most. Similar situation with Garrett, who started well in FP3, topping the classification. We expected a strong performance in the race, but he struggled to qualify and couldn’t confirm his pace.

As he started from the third row, this ended up being a handicap for the next two races. This is the area we need to work with him to make his life easier during the races.

The problematic situation with Kohta, who was experiencing Donington for the first time, other than a few laps last year. It’s a challenging track to learn, but he expected more from himself.

It was also great to have BSB champions McAMS Yamaha and Tarran Mackenzie in the paddock for the first time. They did a fantastic job, and we wish them the best of luck for the rest of their national campaign.” 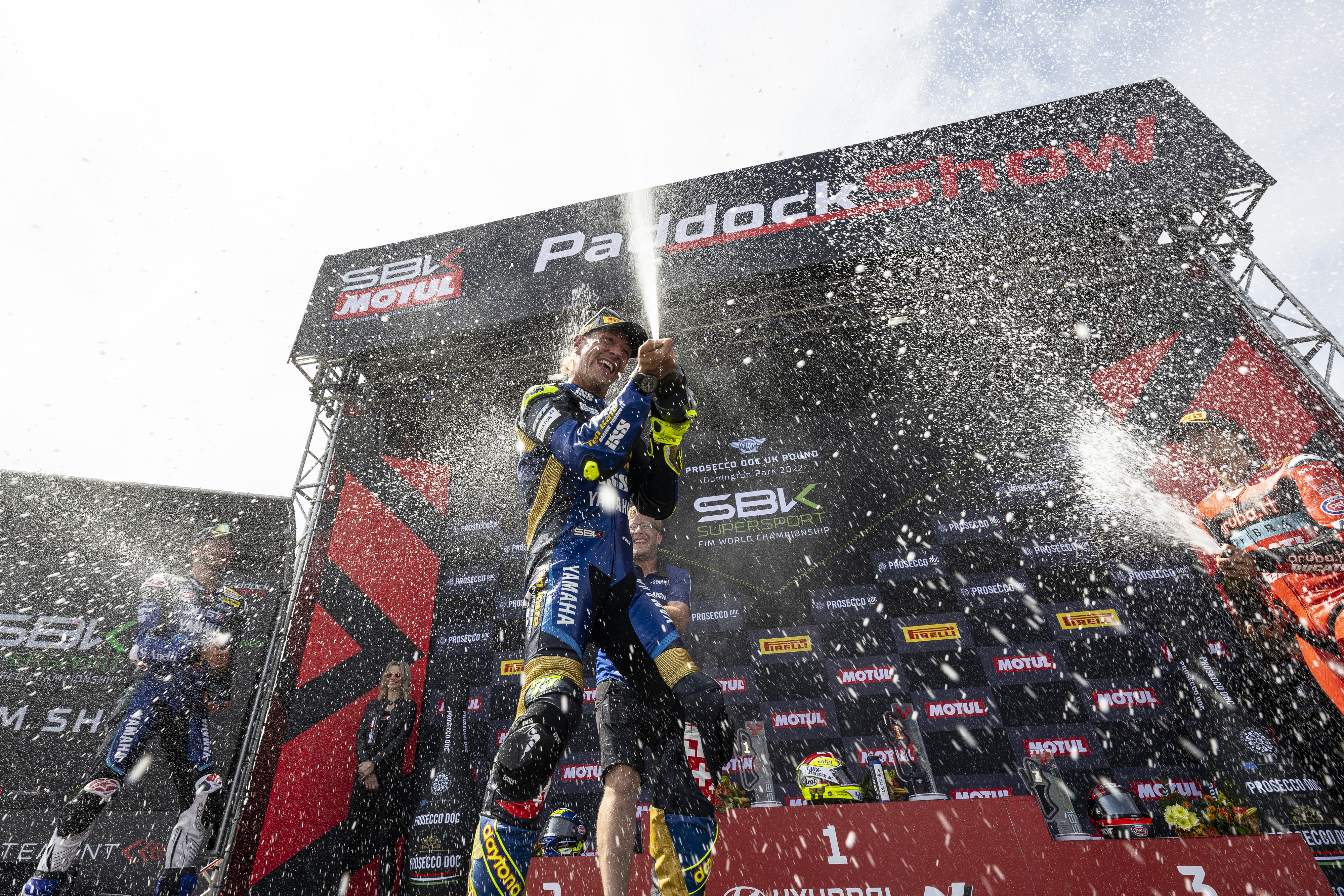 “After the triple victories in WorldSBK, we’re pleased to see another dominant performance by our riders in WorldSSP. Congratulations to Dominique and the Ten Kate Racing team, who achieved their ninth win and gave Yamaha its 100th pole position in the class.

The races have been amazing to watch, with tight fights, especially in Race 2. I was impressed by his last few laps on Sunday, where he could increase his pace to overtake Lorenzo and do a fantastic lap towards the end, more than half-a-second quicker than anyone else.

Lorenzo did very well, considering it was his first time at Donington. In Race 2, he was very close to winning the race, so he can be proud of what he’s doing, and he has to continue pushing in Most.

“Let me also mention that we’ve seen a good improvement from our bLU cRU boys, Andy Verdoia and Unai Orradre. This shows that the project is working well. It’s a shame that Jules Cluzel got injured. Very unlucky. We wish him a speedy recovery and hope to see him back as soon as possible.” “It confirmed the quality seen so far in the Cup at Donington. Congratulations to Devis for the double win, a significant result that allows him to close the gap with the leader. It’s nice to see that Enzo was able to be on the podium yet again at another new track.

We look forward to seeing how this title battle develops, and we expect a brilliant fight from all the riders. The competition is exceptionally high, and many riders still have a chance to prove their ability. We look forward to returning to action for the penultimate round in Most.”

via press release from Yamaha Racing 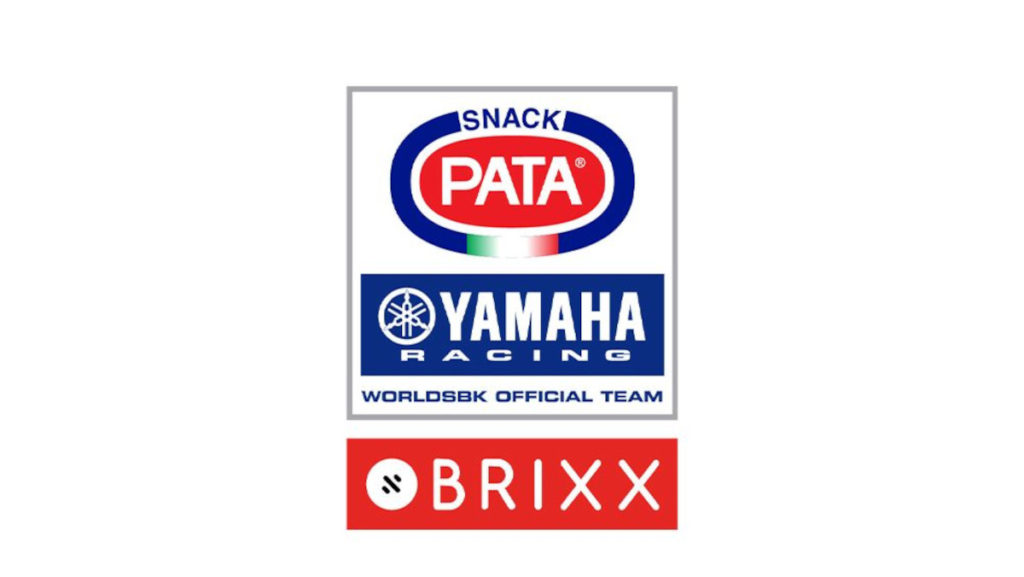 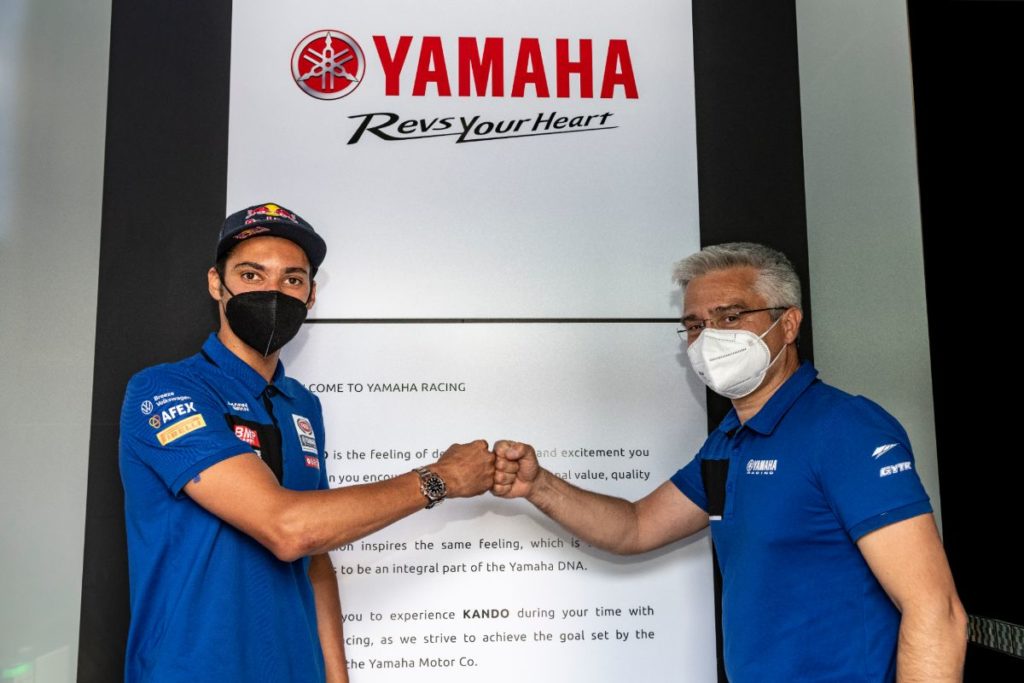 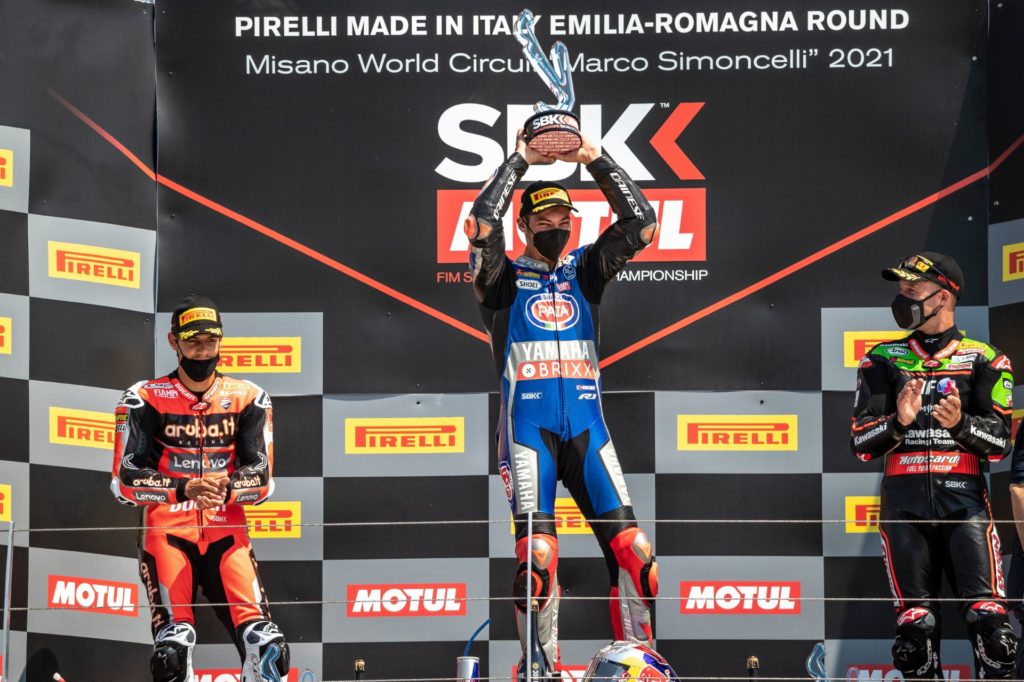