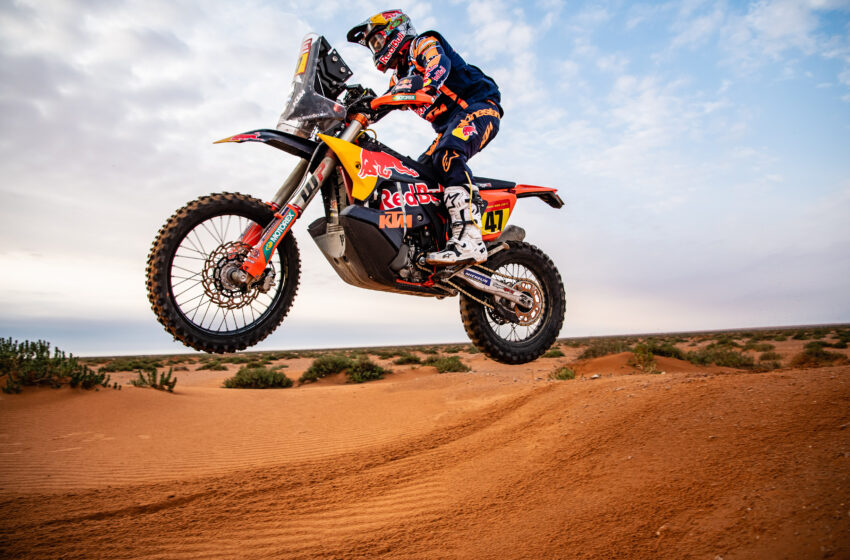 Red Bull KTM Factory Racing’s Kevin Benavides has placed fourth on today’s stage 10 of the 2023 Dakar Rally and moves into the provisional lead of the overall standings.

Riders left the bivouac at 3:30 am to cover the 467-kilometre liaison that led them to the start of Today’s timed special.

Although short at 114 kilometres, the route raced against the clock was predominantly made up of rolling dunes, making navigation difficult and proving a test of endurance for all competitors. 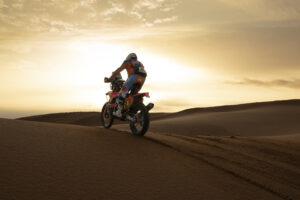 As the seventh rider into the special following his strong performance on stage nine, Kevin Benavides was in contention for the stage win right away. Carrying good speed over the sandy terrain, the 2021 Dakar winner was just 10 seconds down on the leader by kilometre 84.

Losing a little time in the closing stages, Benavides dropped to fourth place as he crossed the line, one minute from the win. However, with times tight across the top 10, Kevin’s solid ride moved him into the rally’s lead, where he enjoyed a one-and-a-half-minute advantage.

Kevin Benavides: “Today was short but tough physically as it raced in the dunes. I started in the seventh position and just tried to keep a nice flow through all the dunes, and it felt perfect. I did have one crash where I went over the handlebars, but it seems it might have had a positive effect because I only lost about one minute, which means I set off into tomorrow’s stage 11.”

After losing time in the desert yesterday following a navigational error, Matthias Walkner bounced back in style on stage 10. Posting the fifth fastest time on the demanding special, Walkner moves around in the top 10 overall and will aim to elevate himself even higher over the remaining four days of racing.

Matthias Walkner: “I had a good day Today. I like this sort of terrain and was able to make up good time across the dunes. I wasn’t pushing too hard at first because I didn’t want to lose time like I did yesterday, but then towards the end, I was able to increase my pace toward the finish. I’m feeling a lot stronger now, and coming in the fifth Today puts me in a good place for tomorrow’s marathon stage.”

Toby Price was the second rider to enter Today’s special. Again, using his skill and experience to good effect, he navigated the dunes carefully to minimize any costly errors. With the leaders’ times extremely close over the short special, Toby ultimately completed the day in 19th, but only eight minutes down on the leader. As such, the Aussie remains in contention near the top of the overall standings, where he now lies third.

Toby Price: “Today was a long day – we were up at 2:30 am, but then just a short special. I tried to pace myself a little Today to ensure I didn’t make any big mistakes and to get a good start for tomorrow’s long stage. I dropped down a little in the standings but didn’t lose too much time, and hopefully, I’m well-placed to attack tomorrow. So far, so good.”

Thursday’s stage 11 marks the first half of the Empty Quarter marathon stage, where riders will spend the night in the desert and receive no outside help from their teams. Totalling 427 kilometres, the location will include a dune-filled timed special of 274 kilometres.