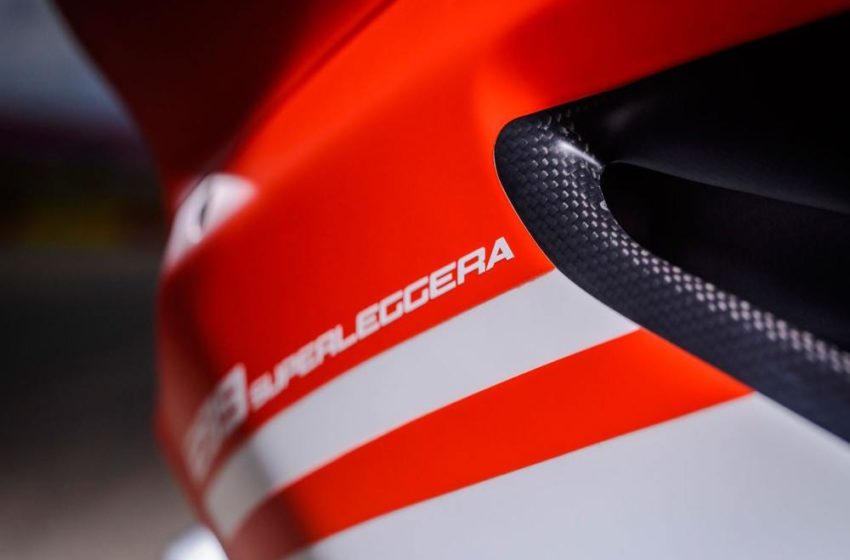 Just as we all expect, Ducati has done it again in grand style. Not any racing motorcycle that can measure up to the Superleggera.

For those of you riders who feel that there is literally no way that you can ride without having technology to intervene, you will be happy to hear that Ducati has gone that extra mile to ensure that the Superleggera is nothing short of a masterpiece especially when it comes to the electronic components being incorporated on the motorcycle.

This was done with the sole aim of permitting the riders to control the power.

While it was still in the process of being created, this bike was known under the name project 1408. Quite a weird appellation which I believe only those who gave it this name will be better placed to tell why they did so, but one has got to admit it makes the bike a little more intriguing and personally, I believe that’s quite cool.

This motorcycle for the moment called internally project 1408 (see illustration below) will certainly be baptized 1299 Superleggera. It will therefore take the case of the 1199 Superleggera revealed at the end of 2013. The latter was already using noble materials such as Titanium and Magnesium.

The future 1299 Superleggera will focus on much lighter material and the speculations gear towards carbon , introducing in passing a series of world firsts for a motorcycle series:

I always like to know what I am buying so let’s tackle this;

Mostly renowned for the top acceleration it could attain, the amazing motorcycle; Ducati Superleggera has a wind-tunnel shape which has proven its usefulness over the years.

This minimalist design was conceived, designed and brought to life by the Ducati engineers with the sole aim of reducing the weight. Motorcycle’s form is a monocoque system which is made of carbon fiber.

It goes without saying that if you are to reduce the weight of any object, you may as well just start with the material before going after the components, if any.

Nothing makes the pride of this bike than its minimalist weight and this was achieved by using carbon fiber. Its swingarm on one side is what completes the structure. As such, you have close to 3kg gained just from the bike’s frame as well as the  swingarm.

As of what concerns the suspensions, the renowned Öhlins took charge of developing just the suspensions required for such a bike. There is a couple of forks at the from which are 43 mm in diameter. It should be noted that they are fully adjustable.

Alongside the tubes and billet forks that are much lighter, there is a gain of about three pounds from what the forks used to weigh on the previous Ducati model. Same holds for the spring which is found on the TTX36 rear shock; there is a gain in mass of a pound.

It is worth mentioning that this shock can be completely adjusted. It comes along with an inbuilt option from the factory which allows the user to switch between the the two methods of linkage; progressive or flat.

Fully adjustable and factory added the option to switch between a progressive and a flat linkage for further control over the ride.

With respect to the wheels, each of them is as large as 17 inches. These are the same rims on the Diablo Supercorsa SP. They make sure the bike’s connection with the tarmac is 100% perfect.

The braking system is assured by Brembo. With its dual discs of 330 mm infront, and 245mm behind, you are sure of the smoothest breaking force ever.

For the brakes, the elements that takes all of this workload is the Brembo Monobloc M50 calipers and dual, coupled with 330mm discs which are in the front. In the back we have 245mm discs which are found at the back.

The front pump is what produces the power that is delivered to the front binders. Well, as the icing on the cake, we have the corner-sensing Anti-Lock Braking system which is developed an engineered by Ducati.

With all the changes on the bike, one may be tempted to forget the changes brought to the engine as well as the control system.

Same as the rest of the parts of the bike, the Ducati design Engineers went an extra mile to reduce the weight of the engine by making use of valves and fasteners that are made of titanium. 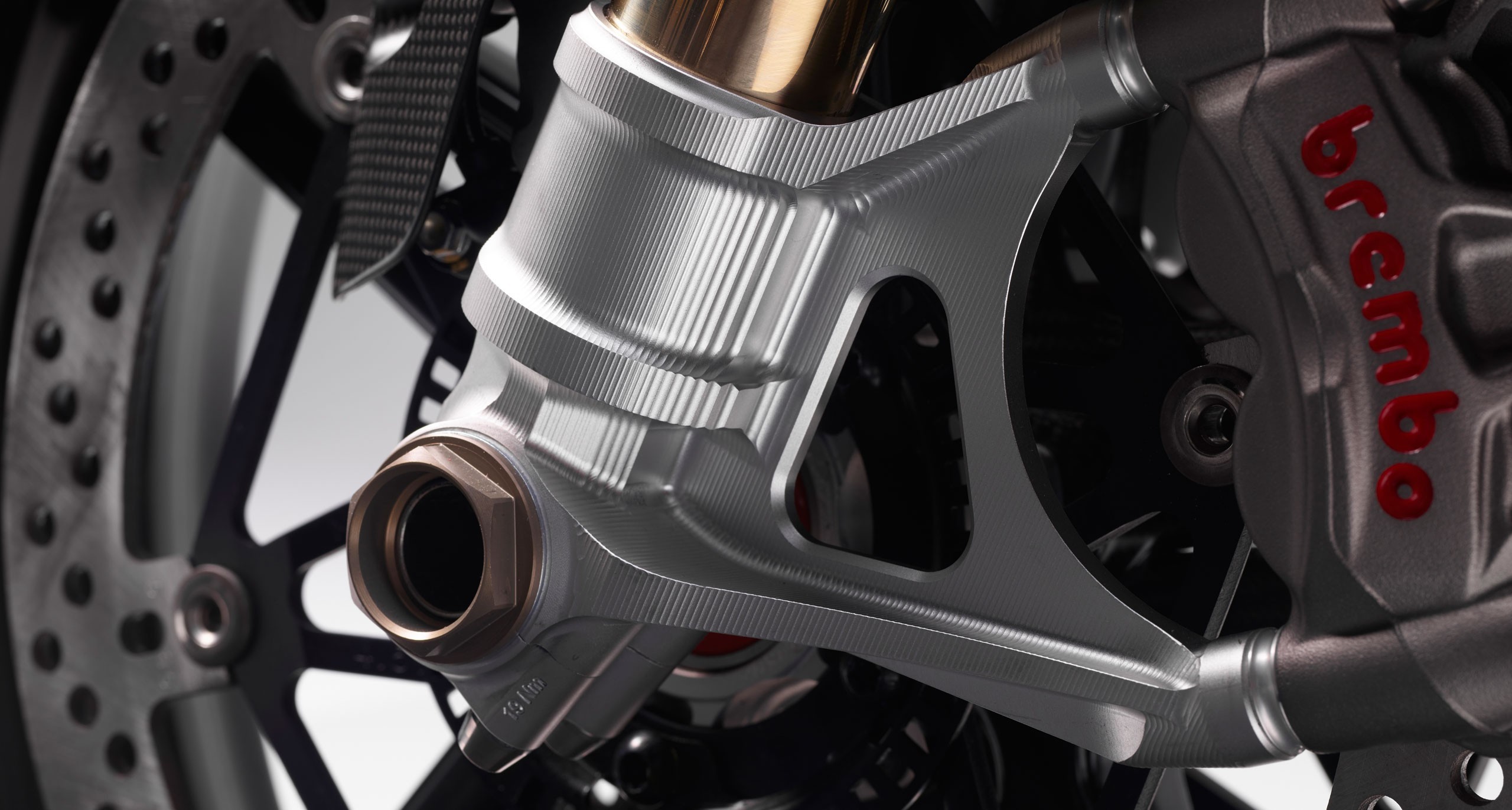 A record weight loss of 4.6 pounds tells a lot about the connecting rods and the cylinder liners used, which are made of titanium and aluminium respectively.

There is  a loss of weight, which is accounted for by the use of Aluminum cylinder liners, titanium connecting rods and tungsten balance weights. The Superleggera is practically the most powerful two-cylinder which Ducati has dubbed till date.

Another redesigned feature of the bike are the pistons. Amazingly enough, the compression can reach 13-to-1 with these pistons. The Ducati Superleggera comes with just two injectors positioned at each combustion chamber. Which makes them four in total.

A long  debate on the motorcycle’s price is nothing but a waste of time. What we have at hand is a limited with barely 500 copies that have been sold. This should be enough reason to have a price of $89000.

Considering the fact that carbon is one of the most prominent materials you have on the Ducati Superleggera, one couldn’t help but think of other bikes which are immensely composed of Carbon. The very first bike that comes to mind is the HP4 which is a model of the BMW.

Truth be told, if one is to compare the technologies used and the skilled labor invested in this bike to get the result, then both bikes are almost at the same level in terms of comparison but BMW decides to make its bike for closed circuits only. This is why on the bikes; you won’t find neither lights nor mirrors.

In as much Beemer made the effort of utilizing carbon fiber in the frame, it still has a long way to go before it is able to meet up with the Plastic treatment which Ducati does on the Superleggera.  That is despite the fact that the

The sublime and high-performance Ducati Panigale takes advantage of the Milan show to slip in an ultra-light version displaying 156 pounds dry or 167 pounds with liquids (but not gasoline).

With such amazing specs and changes, one may consider this as a slimming diet based on massive carbon exploitation at the level of the frame, the oscillating single-sided wheel and the rims. The fully adjustable suspensions by Öhlins have also been lightened as titanium rear spring s used in the bike’s configuration.

The 1285cc L-twin engine benefits from lightweight titanium moving parts and special mapping in order to be able to claim the 215 hp and 146.5 Nm of torque which it has. In other words, such a weight / power ratio allows performance worthy of that of a racing motorcycle.

Yet this Ducati can be used freely on open road and meets the latest Euro4 emission standards which already is a great step ahead towards being universally accepted into the market as it follows the norms.

In order to meet up to the demands of, the Ducati 1299 Superleggera offers several driving modes and has one of the latest driving assistance systems with an angle sensor that is in constant liaison with the ABS and traction control.

The 6-speed gearbox incorporates a quick shift system to avoid disengaging as you change the gears. Still in terms of security, the bike has a standard kit for the track which includes a titanium exhaust, a specific fork head and detachable mirrors to gain another 5 kg. Added to this is a blanket and paddock crutches.

With only 500 copies that have been produced, the Ducati 1299 Superleggera should quickly find interested buyers despite its asking price of 80 000 €.

Like the monocoque frame, the swingarm mixes carbon fiber and aluminum. It retains its single – sided structure. For the very first time in the history of Ducati bikes, Carbon rims have been mounted on a standard motorcycle. This has helped a great way in the reduction of unsprung masses.

All these carbon parts that are an integral part of the bike structure were developed in collaboration with Ducati Corse, the manufacturer’s race department. Carbon fiber would also follow manufacturing processes and quality control to aerospace standards.

As you must have guessed and given that it is a normal expectation with the development of new bikes, we can also assume that the Superleggera engine of will come with a good number of additional horsepower. Ducati calling it the “unique twin to go into history”. It is quite a promising bike!

In as much as the bike comes with a change in weight, the equipment of the bike (electronics, suspensions, braking) should also appeal to the top of the available technology, Ducati summarizing this ultimate Superbike as the quintessence of Ducati knowledge. Among other key words, Ducati uses Latin to define the spirit of his new bomb: “fortitudo mea in levitate,” translated to English gives “the force is in the lightness.”

In France, there were barely 16 lucky people who could boast of being owners of the twin of the Superleggera. A strong block with a power of 200 horses for a weight of only 155 kilos. One must admit that in order to achieve this weight / power ratio unprecedented in the universe of the motorcycle series, this firm had to dig deep in its resources.

What some of the riders think?

Speaker 1
Ducati Superleggera is nothing but a beauty. If I could turn back the hands of time, I would save all the extra cash I spent on beer just to look at this bike in my garage everytime of the day. That notwithstanding, the bike has proven its worth so far and there is no reason why I shouldn’t get one though.

Speaker 2
My spouse who is also a bike fanatic and blogger say that as far as superbikes are concerned, there are only two bikes which ever caught her attention and the Superleggera is one of them.

Source : Ducati and For some reasons the contributor wants to remain confidential.