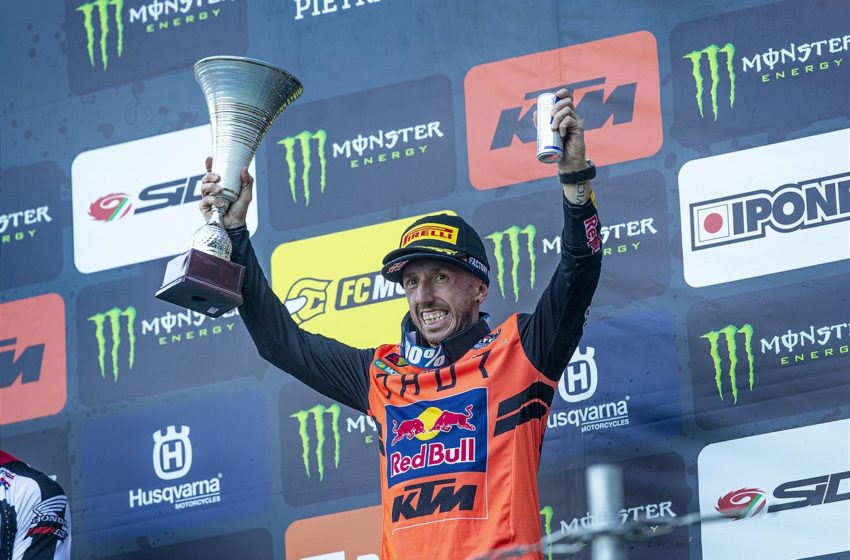 Red Bull KTM Factory Racing returned to the hardpacked racetrack in Arco di Trento for the second of a triple-header schedule of fixtures in 2021 MXGP.

Tony Cairoli triumphed for the second time this season in MXGP as Rene Hofer succeeded in the MX2 class with the KTM 250 SX-F to become the first Austrian winner of the main category since Heinz Kinigadner in 1987.

All six riders in Red Bull KTM colours have now lifted a winner’s trophy in 2021.

Blue skies and warm autumn weather graced the scenic Pietramurata venue for the second time in just three days as MXGP reconvened for the fifteenth Grand Prix of eighteen.

The narrow layout featured only marginal changes compared to the GP of Trentino the previous Sunday. Good starts and brilliant manoeuvres on the first laps were again keys to success around a tricky course for overtaking. 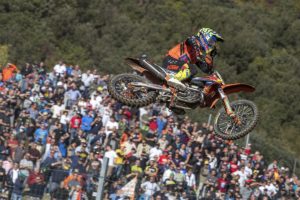 The Grand Prix began with Jeffrey Herlings claiming his tenth Pole Position of the season by almost half a second from Tim Gajser. However, the Dutchman couldn’t make the most of the first slot in the gate after losing traction with his front wheel in the opening corner. Pursuers hit Herlings’ bike, and he was forced to pull out of the race with a broken throttle body.

Jorge Prado, still dealing with the effects of the fractured vertebra Process sustained in a training crash the previous week, grabbed the holeshot and resisted valiantly to take the 5th position.

Tony Cairoli made a bright start and was one of the riders who relegated the Spaniard. The former world champion finished 3rd for his best race result since the Grand Prix of Afyon.

Cairoli was electric out of the gate in the second moto, and his speed on the first laps created a race-winning margin over Jeremy Seewer. #222 controlled the gap over the Swiss for his fourth moto checkered flag this term and his sixth podium appearance.

The 3-1 meant his 94th career victory. Herlings gathered 18 points for finishing 4th despite a minor crash, and Prado retired after an altercation with Pauls Jonass that further jarred his painful back.

Herlings still holds the red plate as championship leader but only by 1 point over Romain Febvre and 3 points from Gajser. Prado remains 4th in the standings, but Cairoli is just 9 points adrift. 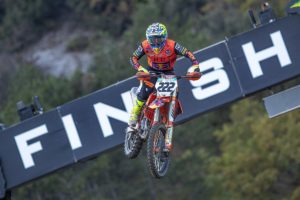 Tony Cairoli: “It’s been a struggle since the crash I had in Sardinia. It played on my mind in the next GPs. My ribs were painful, but in Spain, I was already feeling a bit better.

I was hoping for a good bounce-back after some tough races, but I got sick on Saturday night, and Sunday was brutal. Today I felt a bit better, and I’ve had some good races here in the past.

I did everything I could to be on the podium. In the first moto, I was thrilled with my riding, and in the second, I had a holeshot and could mostly control the race.

I was getting a bit tired, but with my experience, I could save some energy in parts of the track and keep Jeremy behind me. I hope now I can feel even better and be on the podium every weekend; that’s what I’m here to do.”

Jeffrey Herlings: “It is pretty devastating. My front wheel washed out, and someone rode over my bike. My handlebar, gas cable was broken. It was a done deal.

It hurts to get that points-lead to where it was, and I did it in the blink of an eye. I just had to watch from the sidelines. I then had to go straight into the second moto, and I had some arm-pump and couldn’t get into my rhythm.

I missed that first moto. It’s been a bad day. I’m not sure what else to say. It is going to be an interesting last three races. We’ll see how things will turn out.”

Jorge Prado: “I’m happy that I was just a little bit better, and I felt a slight improvement with my back. Two days is too short to heal when you need a couple of weeks. I had a perfect start in the first moto and could finish 5th, a decent race.

I didn’t get a start in the second moto and still managed 3rd after the second corner with a lovely line around the outside. The guys were faster than me, and it was challenging to go fast when the bike was moving a lot.

It was hard to control it because of the pain. Jonass touched my back wheel halfway through and we both went down. It was a pity. I was last and decided to stop because I couldn’t do better. I now have four days and I think I will feel even better on Sunday.” 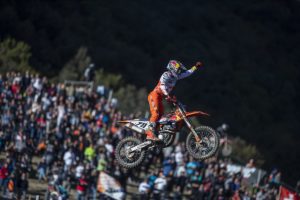 Tom Vialle was the leading Red Bull KTM qualifier in 4th position, and the world champion used the advanced gate pick to run to his fifteenth holeshot of the season.

After taking the lead on the first corner, the Frenchman minimized his mistakes and kept a consistent cushion over Jago Geerts to win his third moto in Pietramurata. Rene Hofer – who had qualified 9th, just ahead of teammate Mattia Guadagnini – kept a steady rhythm to score 4th. Guadagnini was a victim of a multi-rider tangle on the second lap and had to fight through to 11th.

In the second race, Vialle again led into the first turn with Hofer close behind. The Frenchman suffered a crash with countryman Maxime Renaux mid-way around the opening lap and hurt his right arm.

He had another accident shortly afterwards because of the painful limb and had to retire. The collision between the riders allowed Hofer to maximize the opportunity.

The 19-year-old had a clear track and rode a strong moto for his maiden win, first ‘overall’ and second rostrum appearance in his first entire campaign in MX2. Guadagnini was four seconds behind in 2nd place and sat 4th in the final MX2 listing.

In the championship standings, Vialle is 3rd and 16 points from 2nd. He (Guadagnini) holds 4th, and Hofer is 6th, just 18 points from the top five. 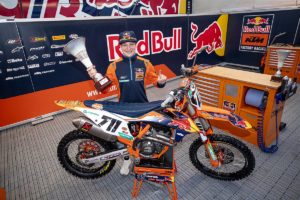 Rene Hofer: “For sure, this is a day I will never forget. It was such a nice feeling once I crossed the finish line. I hope the Austrian fans at home enjoyed it. It’s been a while! I feel a bit speechless. I struggled a bit in the first moto and didn’t have the best flow, and the second moto was much better.

Lucky to avoid the incident with Maxime and Tom, but I felt great out there. I was a bit nervous with 10 minutes to go and made many mistakes, but somehow, I brought it home.

We put in the work for this season and also during the summer break, and since then things have been getting better and better for me. Since Turkey my confidence has grown every GP. It’s also adorable to give KTM that win. Think they’ve waited long enough for an Austrian to be here”.

Mattia Guadagnini: “Was feeling much better today than I was on Sunday. Unfortunately, I had a bad start in the first moto and had a small crash that meant I was almost last. My riding was not so bad to come back to 11th, and the lap-times were good. My start was better in the second moto, and when two riders crashed in front of me, I was 2nd.

Had to get used to riding at the front again! Tried to stay focused and find good lines. 4th overall, but the most important thing was finding the speed and the feeling again. Hopefully, on Sunday, we can go for the podium again and the win.”

Tom Vialle: “A great first moto, but when I touched Maxime, and we had that crash in the second race, then I hurt my arm, and it led to a big one just before the downhill section. Was lucky it didn’t end up much worse. Nothing is broken, and I hope I’ll be feeling less sore after a few days. It’s a shame because I had the starts and the speed, but we just need to accept this and try to come back in a good way as soon as possible.”

The third and final instalment of the Trentino triple takes place this coming Sunday for the Grand Prix of Garda.