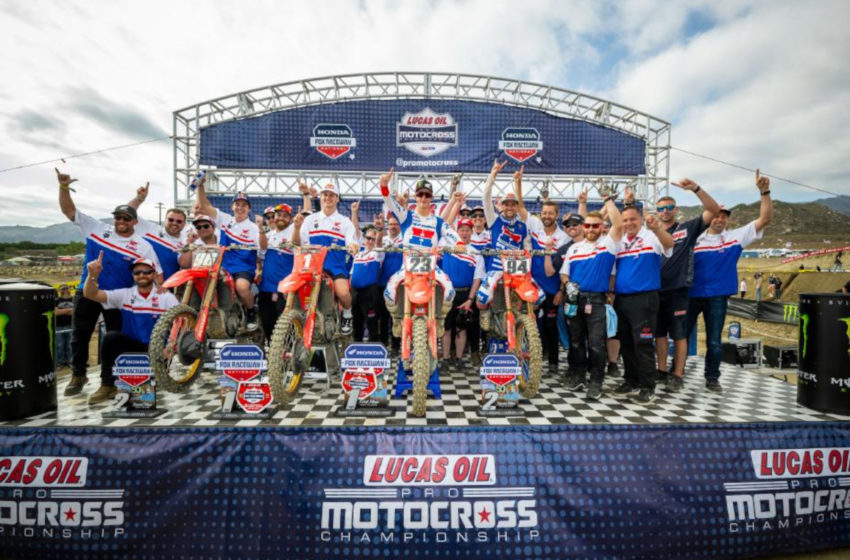 On a magical weekend during which Honda commemorated its 50th anniversary in motocross and unveiled the 2023 C.R.F. Performance family, Team Honda H.R.C. riders were perfect at Fox Raceway’s opening round of A.M.A. Pro Motocross (which was celebrating its 50th anniversary), sweeping the top two positions in both 450 motos and both 250 motos.

The teammates were each other’s only real rivals for much of the day at the Pala, California, track. Still, in the end, it was Chase Sexton and Jett Lawrence winning the two classes to take early points leads, while Ken Roczen and Hunter Lawrence each notched a pair of impressive second-place results.

The Red Riders enjoyed strong starts in their motos, with Sexton and Roczen trading holeshots in 450 and Jett Lawrence second early on in both 250 races. Hunter Lawrence had the most overtaking work, including a moto two charge from seventh to second, highlighted by a dramatic last-lap pass on Jo Shimoda that kept the team’s impeccable results intact. Sexton had to make passes on Roczen in both 450 motos, whereas Jett ran relatively comfortably at the front in the 250 races. 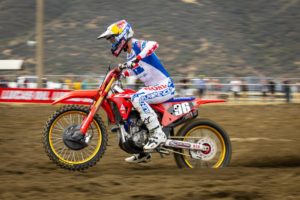 Both Sexton and Jett had relatively narrow winning margins over their teammates (averaging 10.3 seconds and 6.1 seconds, respectively). In contrast, in the 450 motos, the gaps from Roczen to the first non-Honda riders averaged a notable 32.0 seconds!

The special day meant different things to the four riders:

For anyone who witnessed the exhibition, it had the makings of motocross lore for another 50 years. 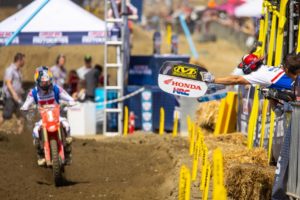 “Man, it was a dream day for me. All supercross season, I wanted to do the fastest qualifying, win the heat race and win the main, and I never did it. Think outdoors. It’s even harder to go 1-1, with two starts and two full motos. It’s tough. Felt perfect out there today.

Kenny and I are on another level, and it was awesome. The whole Honda team has put in a lot of hard work this off-season and this year to get us comfortable, and I feel like we’re at a good point right now. I want to give it up to them. Pala and the fans here in Southern California have treated me well, and I’m just stoked. It was a big day for me, with my first 1-1, and I’m excited to get this championship going.”

“I fought hard; that was my game plan. I passed him in the beginning [of moto 2]; I had perfect lines and speed, and I hung in there the whole way. He’s solid right now and fast, so the most important thing for me was not giving up. This track was challenging – really tricky and sketchy. I’m glad we came out on the podium and safe, especially. On top of that, with Jett and Hunter going 1-2, the factory Honda Racing has done such a good job. I am pumped to get all the retro bikes on the podium with 1 and 2. I thank those guys a lot, along with everyone in my corner.”

“That H.R.C. Honda bike is hooking up out of the gate, giving me better opportunities. It’s a good feeling that four times undefeated here, even though it’s not one of my favourite tracks. It’s awesome. Congrats to Hunter; I was trying to race and look back to see if he got Shimoda. It was great to have Honda go 1-2, and it was almost like we were having a little competition with the 450 guys.”

“It was tough; it’s a tough track to pass on, as it’s pretty one-lined. It’s not one that you can over-ride and muscle the bike around; you have to be smooth and technical. I’m happy. The 1-2 is great for the family and a great way to start the season, and I can’t thank the team enough.”

“I guess all I have to say is, `Wow!’ What an incredible, fantastic weekend. I still feel like someone will wake me up out of this dream. We could not have done any better – absolutely dominated, with Kenny and Chase beating everybody by 30 seconds.

This kind of stuff doesn’t happen ever. We had to squeeze in as much preparation as possible after supercross, and I think it was quality testing. We have four of the worst dudes on the track, is what it comes down to, and obviously, the bikes are equally as impressive.

This week was hectic for everybody, with some media things as we debuted the new 50th Anniversary 450 model. We raced with that look too, so it was an ’80s weekend for us, and they had an ’80s-worthy performance.

We had legends here like Rick Johnson, Johnny O’Mara, Gary Jones, Steve Lamson, Jeremy McGrath and more, and everyone seemed so stoked that it just made the weekend super special.” 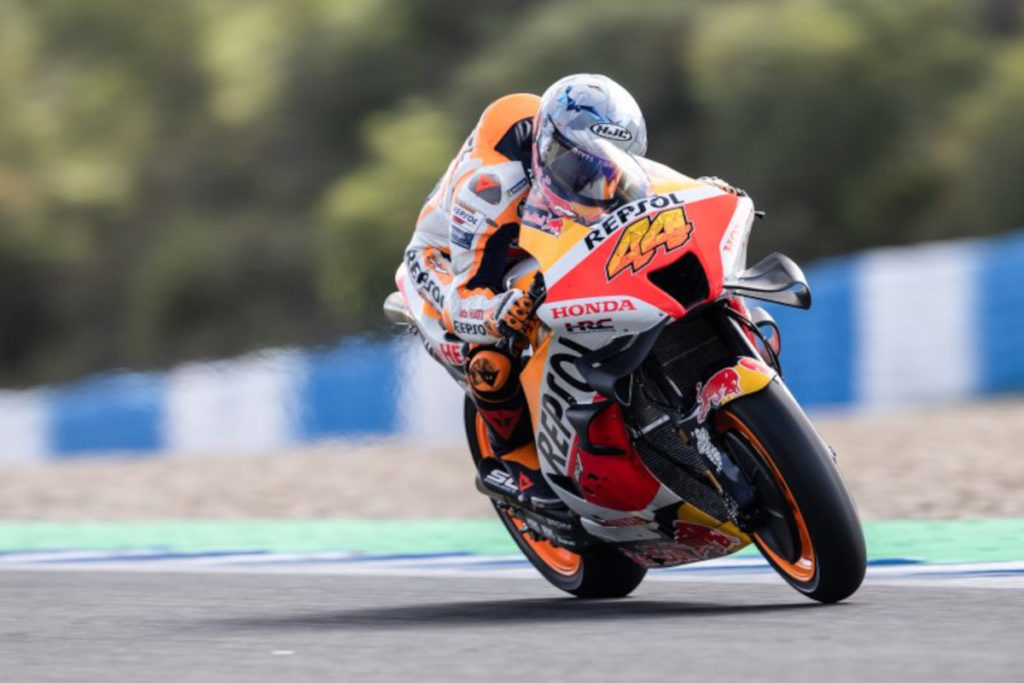 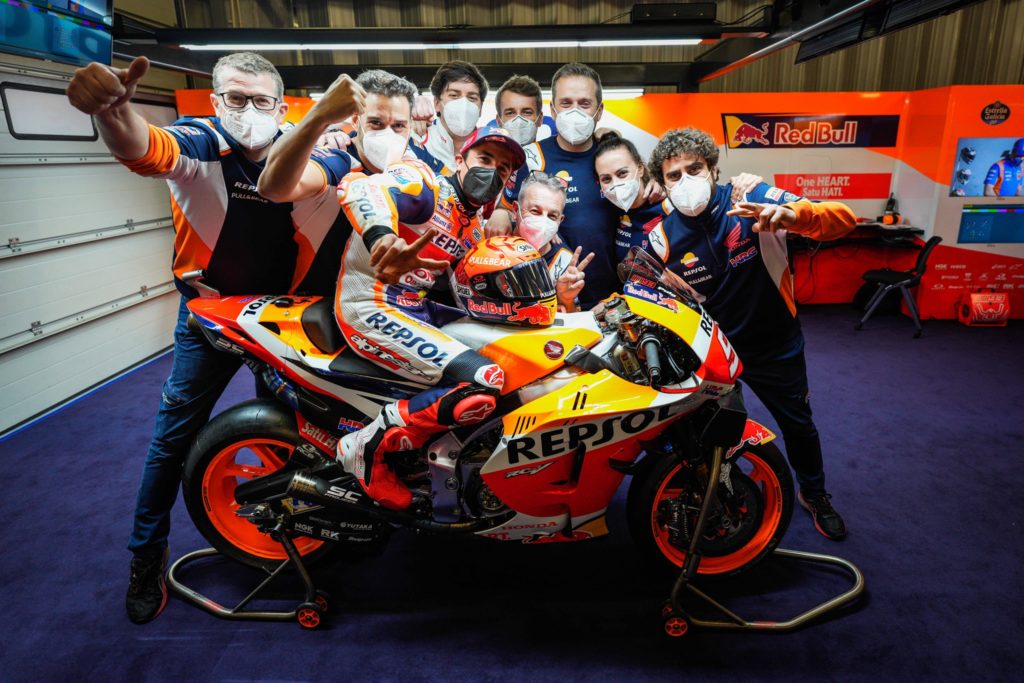