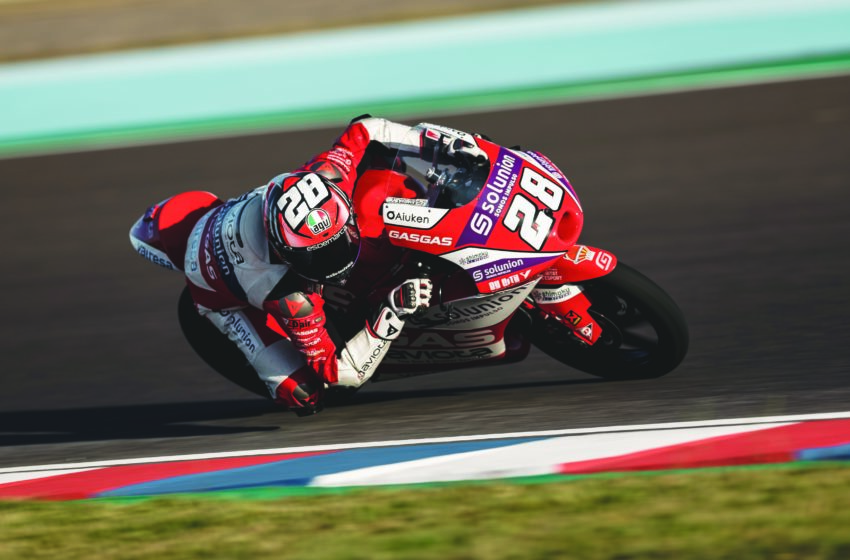 As the saying goes in the USA; “Race fans, are you ready?!” Jake Dixon certainly was. The Shimoku GASGAS Aspar Team Moto2 rider teased his blistering pace last time out in Argentina and continued to turn up the heat with a stunning first podium of his Grand Prix racing career by taking third place at COTA.

The 26-year-old British rider had been in threatening form all weekend, qualifying in the sixth position and consistently leading around the Americas’ 5.5km, 20-turn Circuit.

Not even 35mph wind gusts could throw Dixon off his form as he rode a confident race that saw no less than 12 rival riders unable to reach the chequered flag. The emotional result and 16-point Texan haul propel Dixon up to seventh in the championship standings. 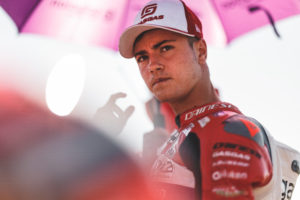 Teammate Albert Arenas had also shown excellent promise throughout the weekend, having qualified in fifth. Unfortunately, a tangle caused principally by rival Marcel Shrotter at turn one, on lap one, pushed Arenas down to 20th place.

Working hard to recover, Arenas stayed calm in the 34°C heat to recover back to 11th place by the end of the 18 lap race, snatching five points along the way.

In an unusual switch-up to the weekend’s schedule, the Moto3 field had to wait patiently until the premier class race had concluded. The nervous pause only motivated the Gaviota GASGAS Aspar Team riders, not least current championship leader Sergio García.

Having qualified in 14th, García stormed off the line, leapfrogging up the order to fifth in just five laps. Frustratingly on lap seven, however, he was tagged from behind by rival Daniel Holgado at turn 17. The incident punted García off his GASGAS RC 250 GP machine and forced the 19-year-old to retire from the race two laps later.

Meanwhile, team-mate Izan Guevara was toughing through an equally eventful Grand Prix and having been handed a particularly harsh penalty – meaning two ‘extra-long lap corners – due to a slight movement before the lights went out the start of the race. Guevara had it all to do from his 10th place grid slot.

Running efficiently with enough pace to challenge for the podium, the 2020 Moto3 Junior World Champion took his penalties with style and still fought back to seventh and secured nine championship points. Guevara now also sits in fourth place in the standings on 37 points.

After a sapping schedule of fly-away races across the Middle East, Asia and the Americas, Dixon, Arenas, García, and Guevara can enjoy a two-week hiatus before returning to action closer to Europe Grande Prémio Tissot de Portugal at Portimao on April 24.

#11 – Sergio García: “I was turning inside, and on the good line, when a rider drew close and hit me on the side. I lost control of the front wheel. There was nothing I could do. It was a move that I really cannot understand. I’m frustrated and angry, but this can also happen in racing. It wasn’t my fault, and nothing I could have done. We’ll look for better results in Portugal.”

#28 – Izan Guevara: “I don’t know what happened at the start, but I think I had a small problem with my clutch anyway. Again, bad luck because my rhythm was strong enough to keep with the lead group. It was a shame because it has also hit us in terms of the championship. Two Long laps, and I used pretty much all of my tires today. We’ll keep our heads up for the next race.”

#75 – Albert Arenas: “We take five points home, but I’m disappointed with the race. I could have done better if it hadn’t been for that contact I had in the first corner when I was pushed out by a rider behind me and was virtually last. We got back to 11th, but I’m mad about it. We’ll keep positive for Portimao, which is a track I like. Thanks to the team, and congrats to them for the season’s first podium, we’re competitive, and we’ll keep pushing for results like those.”

#96 – Jake Dixon: “I know it’s the third position, but I’ve worked so hard for this – honestly, man! All the hours, all the tough races. It has been tough three years, man, and finally, can show my potential. If I’m honest, just rolled out of it from ten laps to go. Wasn’t taking any risks. Knew I had eight seconds behind me. Was struggling a little bit – maybe I could have fought for a second, but today wasn’t the day. Today was to gain points – and I think people now know I’m here this year and can be a threat at every race!”

Championship Standings – After Round 4:

Championship Standings – After Round 4: