The Benelli TNT 300 is among the most significant bikes in India, which is powered by a twin-cylinder engine. Lets see the review of TNT 300.The TNT 300 is a naked beautiful street bike with impressive performance on Indian’s roads. It’s a fairly good looking motorcycle having neat sport muscular curves which gives it an unmistakable striking look. This look is greatly seen in its colors which can be black having subtle red graphic lines which run neatly across the front body panels making a nice contrast or green having subtle black graphic lines and so on.

The TNT 300 headlight is well shaped and sits within a front fairing. It provides great visibility at night while behind it the flashy alloy handlebar has a pair of functional rear view mirrors and plush feeling rider grip. Its alloy control levers feels good to touch with its brake lever offering four way reach adjustment. The liquid crystal display contains a clock, speedometer, trip-meter and fuel gauge. The switchgear is of good quality and its analogue tachometer is housed in the digital analogue instrument.

The shapely large 16-litre tank gives it a decent touring range and this complements the comfortable large looking stepped seat. It also welcomes inner thigh grip due to the presence of good knee recesses. The tail fairing is beautifully shaped and made up to state, rendering a comfortable grab handle and dual tone LED powered tail light. 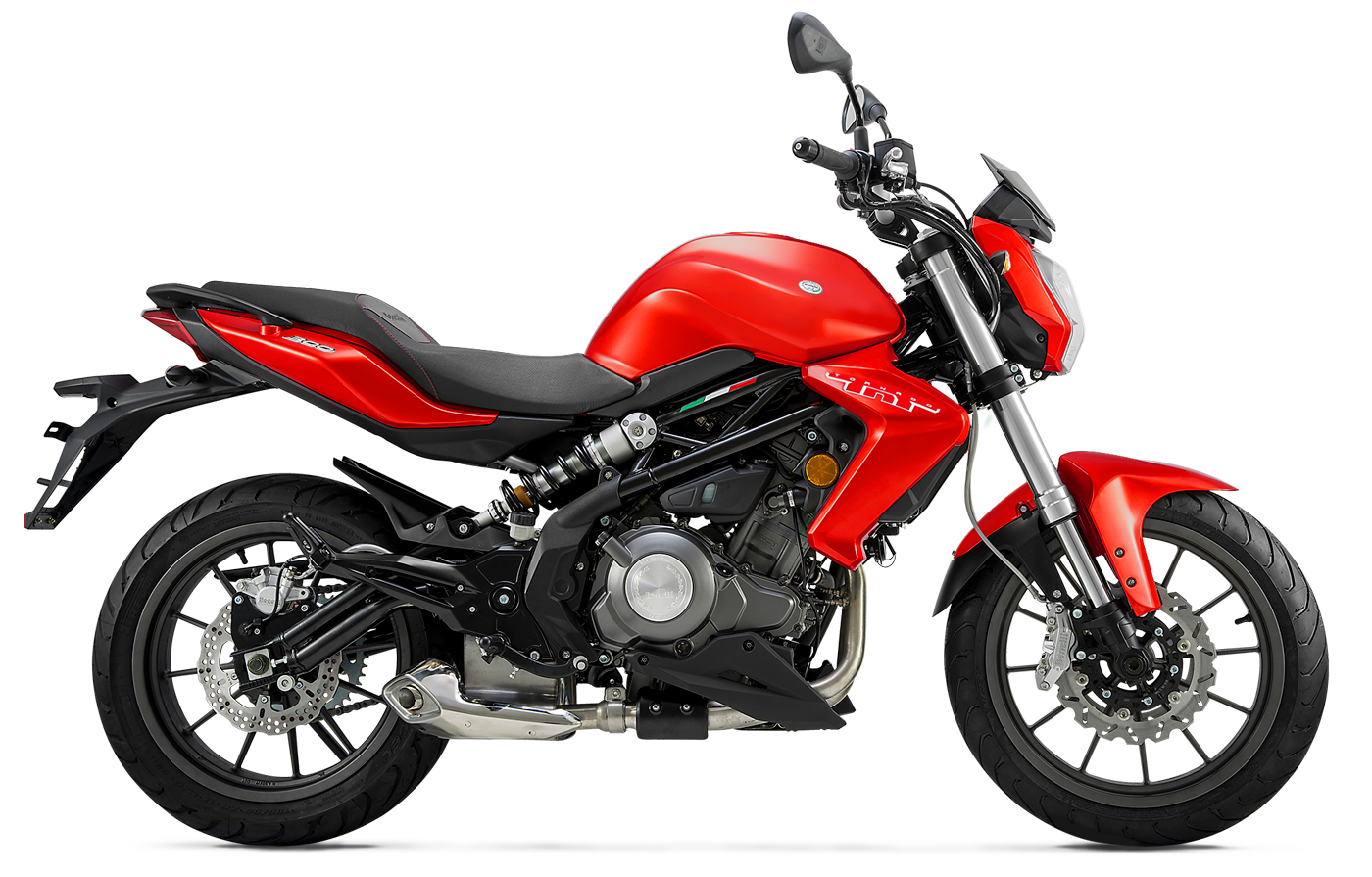 The TNT 300 uses a four-stroke, 300 cc, parallel twin-cylinder and a short stroke (with bore and stroke of 65.0 x 49 mm) engine. The engine eight valves is driven by the dual overhead camshafts, liquid cooling is standard with injection via twin. It has an output adequate power of 36.2 bhp at 11,500 rpm and 2.75 kgm of torque at 9000 rpm.  This bike’s ample wave of bottom end torque activates it to power past most traffic in stop and go conditions.

When in its saddle, you can start unleashing its horses, the character-rich engine output brisk acceleration, with a decent mid-range, after flying past 7,000rpm with power still rushing in as the bike delivers screeching performance up to its limit around 11,000rpm. The TNT 300 gear ratios makes this bike a competent one to tackle city traffic as well as it enables cruising on the highways, without any difficulties. 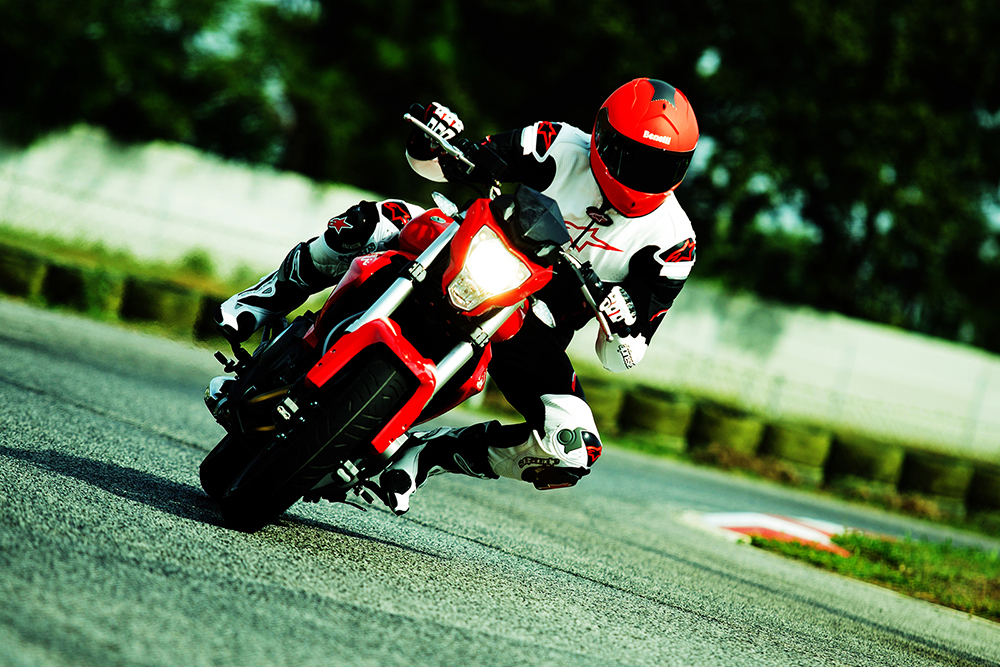 This motorcycle is held together by a high tensile steel construction trellis frame and swing arm.it has a roomy saddle which is quite comfortable for long distances, both for the rider and the pillion, making the TNT a comfortable touring bike.

The TNT 300’s potent motor took 60kph from standstill in 3.41 seconds during performance testing, 100kph in 8.38sec and 130kph in 15.38s. Its third gear was good for a 99kph, fourth taking from there to 115kph and fifth bringing you up to 130kph. In the sixth gear we had a speed of 154kph proving TNT 300 engine is refined, smooth and performs effortlessly.

Benelli has provided a sturdy 41 mm upside-down forks with 115 mm of travel and an adjustable offset mono-shock at the rear. Its suspension soaks up bumps with ease and it’s capable of absorbing potholes without bottoming out. It has a great way of handling direction changes especially when attacking the twisties. 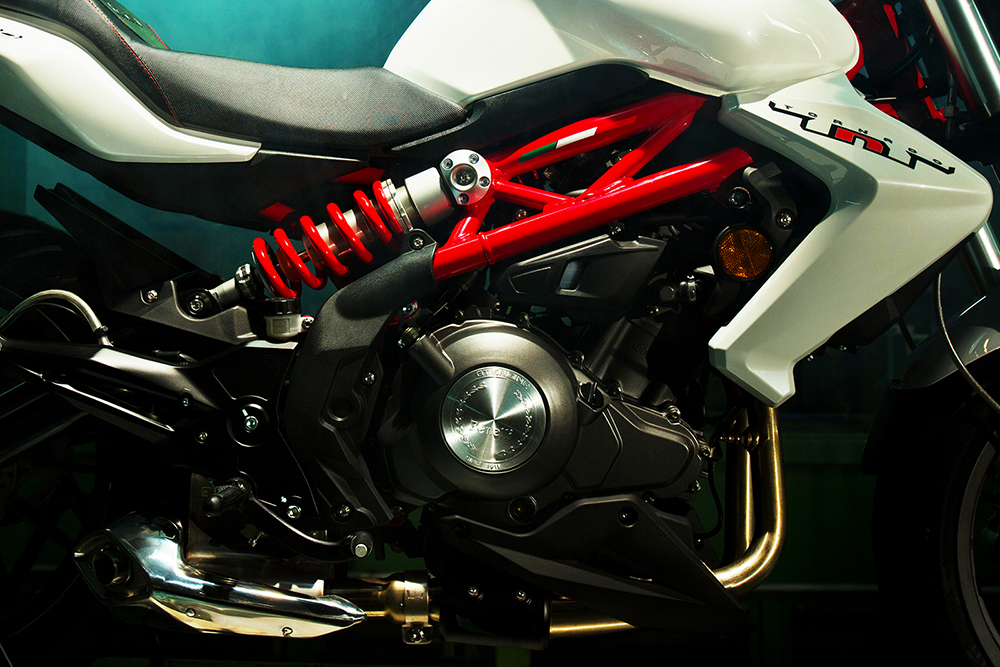 Ride quality on TNT 300 is plush, sporty and very comfortable and its body weight is not forced on the wrist. Its amazing stability and balanced nature is observed at all times even when been crawled or pushed to the limit. Steering the TNT 300 is quite easy without too much effort. Its front and rear tires comes from radial Perelli and they are tubeless providing firm grip at all times even on wet patch roads. The brakes on this bike are strong, steel braided, line-fed 260 mm petal discs which work well in front and at the rear providing strong and impart confidence as you ride.

Benelli has excelled in making TNT 300 gain a place as one of the great street bikes in India and has done well to impact a quality look and feeling when in its saddle. It has also provided a flexible engine and an adequate torque to negotiate bump traffic and spread it wings when blasting away at high speeds. Changing through its six-speed gearbox is pleasant. The powerful twin disc powered front brakes and smart looking offset rear mono-shock are impressive and its deep exhaust note sounds fine. Overall the TNT 300 is a solid appeal.