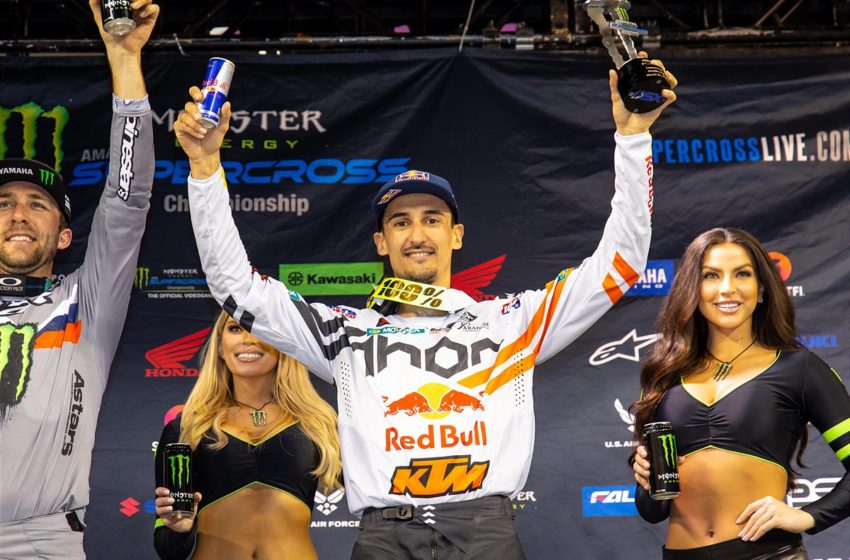 Red Bull KTM Factory Racing’s Marvin Musquin continues to step into his stride late in the AMA Supercross Championship season. Where he captured a second-straight podium finish in the highly competitive 450SX class. Teammate Cooper Webb fought back from a pretty big practise crash earlier to come away with sixth-place in the Main Event.

Qualifying a season-best second earlier in the day, Musquin got right into racing as the gate dropped for 450SX Heat 1. Powering his KTM 450 SX-F FACTORY EDITION into second off the start. He pressured the leader early on before settling into a comfortable second-place position that he carried through the checkers.

In the Main Event, Musquin started in fourth, and he battled just outside podium contention for the first half of racing. Musquin capitalized on Justin Barcia’s mid-race crash, putting himself in the right place, and he charged into the third-place position. He held firm for the remainder of the race to secure his second-straight podium finish. 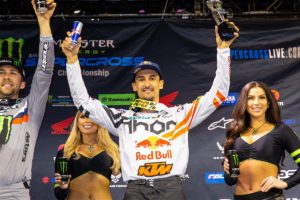 Marvin Musquin: “To get on the podium tonight is huge! My speed was good today, and my starts were good too. I didn’t have the pace in the first few laps, but I tried to focus on myself. Malcolm was behind me until the last lap, so I had to stay focused and charge hard. I closed the gap a little bit, but that track was tough, so I’m pretty happy to be healthy and move to the next round having a weekend off.”

Despite a tough start to the day, defending 450SX Champion Cooper Webb turned things around to come away with a decent finish in Seattle. After experiencing an issue with his start device in 450SX Heat 1, Webb found himself just inside the top-10 on the opening lap. Picking up speed as the race went on, he was able to claw his way back to a sixth-place finish in the heat.

In the Main Event, Webb had his work cut out for him with a mid-pack position off the start. Rounding the opening lap in 14th, he put his head down and charged into the top-10 a few laps in. Slowly moving up the ranks, Webb made his way into sixth just before the mid-way point. He put himself in position to battle for a top-five spot late in the race, where he ultimately finished only a couple of seconds back in sixth. 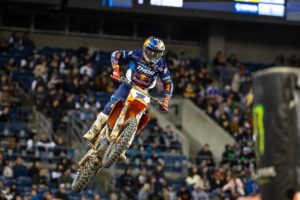 Cooper Webb: “Seattle was a bit of a tough day and into the night. And I had a pretty bad practice crash that left me pretty banged up on the opposite shoulder, which is never great. Got Dr G to help me, and we got dialled in for the night show. Had a malfunction in the heat race where the holeshot device came undone, so I got a pretty bad start. Didn’t go great in the heat race, which left me with a bad gate pick for the Main Event, and I did what I could with a bad start to charge back into sixth.”