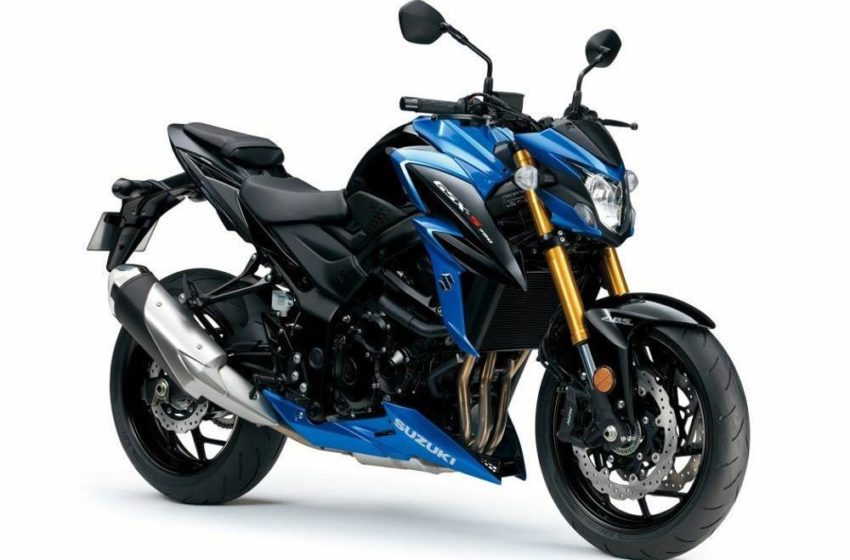 At a first glance, the Suzuki GSX 750 looks so much like its predecessor the GSX-1000 but happens to be a little smaller.We tested this machine on busy roads of M.G.Road in Pune.

Engine and performance ratings of the bike.

To begin with, the GSX-S750 which is one of the latest Suzuki prodigies gets its engine from no other bike but its renowned predecessor; the K5 R750 and that’s really something to write about considering how perform-ant it was. The latest innovations on this bike come with no other aim but to make the riding experience more comfortable. It has new injectors which makes the combustion process easier and faster. With a new airbox, there is a guarantee of having the engine cylinder function at their optimal point. As a result, this engine has a record torque of 81Nm at 9,000rpm.

The Suzuki GSX-S750 makes use of a 749cc 16v DOHC inline four which was practically just borrowed from the K5 Suzuki GSX-R750. With such a torque, it makes the most satisfying noise that you will ever get from the exhaust of an inline four motor. The sound is so sweet to the ears. Some will even say a wail at some high pitch, but rest assured, it is immediately endearing.

Once you begin your ride, the only word that comes to mind is “sensational”. The power that builds within and the bike flows so smoothly that you have the feeling of being in the clouds while on the bike. There is absolutely nothing frantic about this power. It is rather friendly as per say and the new riders will absolutely love it. The only catch so far is at the level of the fuel injection which generates a minute jerk that can be felt by the rider when transition to an open throttle from a closed one.

It is also got a redline which is quite a pleasure for those who would like to be ramming here and there.

Considering the fact that this bike is a new , one wouldn’t expect anything more but that feeling of dealing with a slick gearbox ad all the refinement that comes with it.

With the new design of the Suzuki GSX-S750, there a little cover at which actually blocks the hole that usually exists at the back of the engine. This makes it feel heavier especially at the tank area.

With all of this performance comes that sound it makes especially when approaching the redline. It makes the sweetest howling sound you will ever get and I don’t believe there is any tangible reason why you will give up this bike for another one of this era. 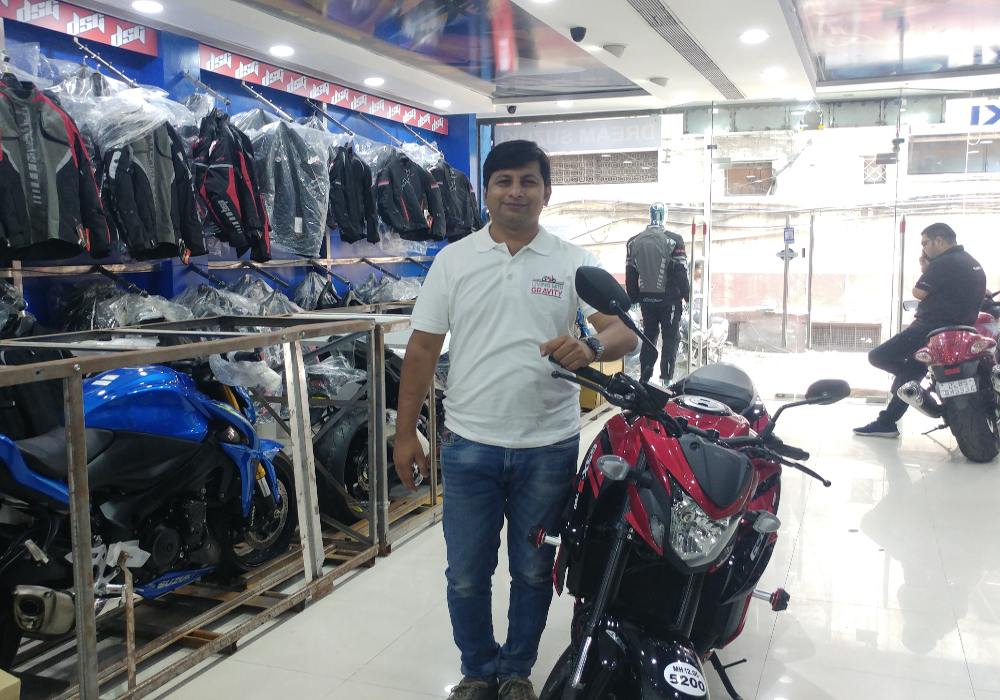 The Suzuki company has always been known to make their bikes with rubber brake hoses but this time around, the Suzuki GSX 750 rather comes along with solid brakes. This can be attributed to the calipers it comes with that are mounted radially, Nissin floating discs of 310 mm in diameter and standard ABS. All of these sum up to give the strong brake bite that slows down a speed monster such as the Suzuki GSX 750 from an amazing 220km/h down to nothing with little or no effort. It also comes with OE tyres that are manufactured by Bridgestone.

With such a marvel, it will be no surprise that even the handling of this bike will be no stress. When It goes exactly where it is pointed to go. The “turn in” is one of the easiest features to use on the bike. Its mid-corner is as stable as a rock and it emerges flting which makes its traction control to be so smooth.

With an impressive mass of 215kg, the Suzuki GSX 750 is definitely not the lightest of bikes if one were to compare it to other motorcycles of its class but rest assured, this mass is only significantly felt when making side-to-side transitions.

It only at consecutive tight turns in opposite direction that you will feel that you are actually putting in some effort to control this motorcycle. 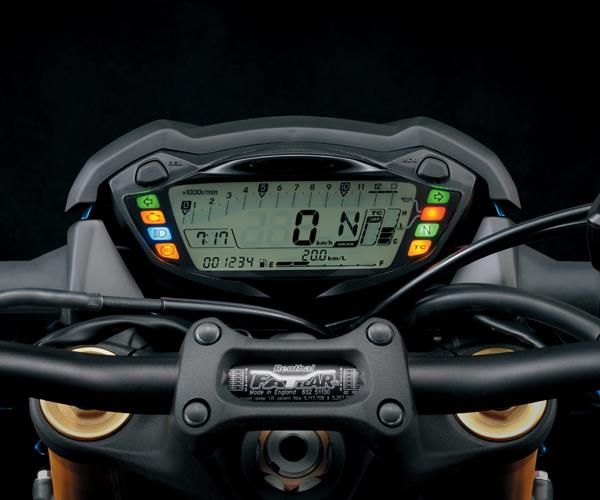 To add to this, the Suzuki GSX 750 has quite some leaning stability and ease when it comes to steering thus making it a “forgiving motorcycle” as per say.  This explains why those who had to test this bike say they can easily catch up from any mistakes they make within the twinkle of an eye. At a circuit such as the Buddh International Circuit, you will have a couple of corners and if aren’t yet versed with it, it may take you a while before you adapt yourself. With the Suzuki GSX 750, there is not much of a problem as you can easily maneuver about and eventually correct your mistakes as you may choose wrongly.

So same as in the Suzuki GSX-S1000, all its meters have been digitalized and to anyone who may be reading this, it wont take long to get used to various features that get displayed. All of it is some compact liquid crystal display (LCD) that show you everything you need to see. The only functionality here is the tachometer which comes enhanced with a peak hold function that gets to display what you attained as peak revolutions after you must have completed your throttle a la MotoGP.

Alongside the normal traction control, The Suzuki GSX-S750 comes with a standard Anti-lock braking system (ABS). The former has basically 3 modes of functioning:

Mode 1: Any sporty ride that may involve wheelspins

Mode 2: Generally used for most rides. (Practically as used as the Drive mode in vehicles)

Mode 3: Used for slippery rides usually caused by the wet nature of the terrain.

To crown this all, The Suzuki GSX-S750 is made so “biker friendly” that the transition from one mode to another is stress free as possible and the manner in which the system reacts to this is even more subtle. It is so easy to do this change that you may actually have been in the least adapted mode for a while and will only have the TC lights to warn you(that is if you even notice them flash at you as you ride along).

The Suzuki GSX-S750 also comes with a  left switch cluster which is quite a familiar aspect of bikes and very much easy to be manipulated. The mode if operation is relatively easy. All you need to do is press on the SEL button when there is the need to change modes. You then use the arrow keys to choose your desired mode and again hit on the SEL button to confirm this. That’s all !!

Generally, the Suzuki GSX-S750 is quite an undemanding bike. This has been explained earlier in most aspects. It is relatively the easiest Suzuki motorcycle to ride and steer. Some may even go as far as claiming it will be an easy task to live with it too. Its specification sheet speaks for itself. With a 230km/h speed which still lets you have a full control on your gestures as well as your positioning  with barely little or no effort that is applied.

Every new biker will consider this a perfect ride to have thus making it a bike that many will recommend to new riders. Not only is this bike smooth, but it is also quite trustworthy too. At a mediocre price of Rs 7.45 lakh ex- showroom Delhi for a bike of its class, it is quite a good deal.

If one were to compare it to the other bikes produced by the British and Japanese giants in the same industry, there may be a few points to take home about this bike. When it comes to the mass, the Suzuki GSX-S750 happens to be the heaviest of all but not the most powerful. This tells a lot about the material used and the components incorporated in this bike

In the Suzuki family, the GSX-S750 happens to be their smallest motorcycle ever and with a reasonable price as Rs 7.45 lakh ex showroom-Delhi, it will surely top their charts of best sellers in little or no time.

If you are a rider and looking to brace the tracks in all confidence, the Suzuki GSX-S750 will just be the right choice for you. It is so performant but yet, very comfortable. It is so drama free that you will rather have that urge to keep pushing your limits until you can no more. The Suzuki GSX-S750 is just one of its kind. Well done Suzuki!

Why Royal Enfield is important brand?