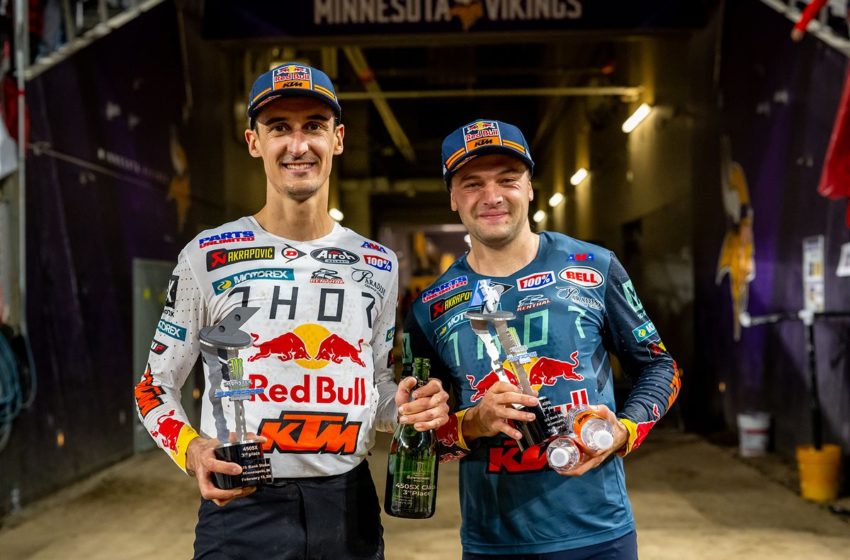 The Red Bull KTM Factory Racing team came away from Round 7 of the AMA Supercross Championship with significant momentum as Cooper Webb, and Marvin Musquin delivered a pair of podium finishes in Minneapolis. With persistent performances aboard the new KTM 450 SX-F FACTORY EDITION, both Webb and Musquin rode calm and collected to navigate their way through a hectic 450SX Main Event.

Webb was strong from the start as he powered his KTM 450 SX-F FACTORY EDITION into a top-five qualifying position earlier in the day. The defending 450SX Champion had a great start in 450SX Heat 2, charging into second right out of the gate. He swapped positions inside the top-three early on, but he put in consistent laps to secure a strong second in the heat.

In the Main Event, Webb charged out of the gate to secure his first holeshot of the season, and he led the first seven laps with pressure coming from behind. He lost a couple of spots to fourth just before the halfway point, but he maintained a strong pace late in the race to keep the lead group within striking distance. With four laps to go, Webb inherited third when another rider went down ahead of him, and he continued to push, overtaking second when the leader crashed out on the white flag lap. Crossing the finish in second, Webb secured his second podium finish of the season with a solid performance in Minnesota. 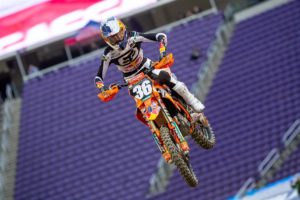 Cooper Webb: “It’s nice to be back up here and back in the fight – a chance at running up front again. I have to give it up to the team. They found some good stuff this week. I’m still not where I want to be, but it was a great night – we got a holeshot, led laps, and a few crashes put me into second, but I’ll take it. It’s been a rough start to the season, and there’s light at the end of the tunnel, so we’ll take it.”

Musquin, the fourth-place qualifier, got a top-10 start in 450SX Heat 1 and positioned himself into eighth on the opening lap. He quickly moved into seventh and steadily gained positions lap after lap, working his way up to fifth by the midway point. He put in intense laps through the checkers, scoring a top-five transfer into the Main Event.

In the 450SX Main Event, Musquin put his KTM 450 SX-F FACTORY EDITION into sixth off the start, and he wasted no time climbing into the top five. Throughout the race, he clicked off consistent laps to put himself into a favourable fourth-place position heading into the final laps. With the misfortune of the race-leader going down, Musquin was able to step into the final podium position with one lap to go, and he brought it home to secure his first podium of the season at Round 7.

Marvin Musquin: “These podiums don’t come easy this year, so I want to enjoy it, even though I’m a little bit disappointed because I was right there and I lost some ground at some point. It took me a while to figure out what to do in the whoops, and I was faster on the rest of the track. It doesn’t feel like I got third with the way the race went, but this is racing, and the competition is tough, so third Tonight is great.”

Aaron Plessinger had a mid-pack start in 450SX Heat 1, and he charged his way into the top-five early in the race. Moving into fourth around the halfway point, he continued to perform solidly to finish fourth in the heat. In the 450SX Main Event, Plessinger grabbed seventh out of the gate, and he maintained that position for the first eight laps before dropping back to eighth. In a race of his own for most of the night, Plessinger could rally his way back into seventh late in the race. 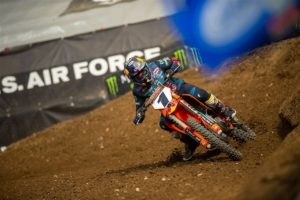 Aaron Plessinger: “Tonight was a step in the right direction. I had an all right start in the Main Event, and I just felt a little stale the whole race. I couldn’t push forward, and I was just kind of riding – a few people got by me, and I got by a few people. This week, we made much progress, even though my riding isn’t showing how good the bike is working. We’ll go back to Florida this week, work on me a little bit and be back for Dallas.”

It was a tough start to the 250SX Eastern Regional Championship for Max Vohland, who suffered a race-ending crash on the opening lap of the Main Event. In his first gate drop of the season, Vohland came out strong in 250SX Heat 1 as he charged his KTM 250 SX-F FACTORY EDITION into fifth early on. He moved into fourth on lap three and battled back-and-forth around the top-five to secure a seventh-place transfer into the main.

In the Main Event, Vohland got off to a mid-pack start, and he ended up going down in the first turn with multiple riders hitting him while on the ground. Banged up, Vohland decided to get checked out by the medical staff on-site, ending his race before completing the first lap. The initial X-ray did not show any broken bones, but Vohland plans to get a second opinion when he returns home this week.