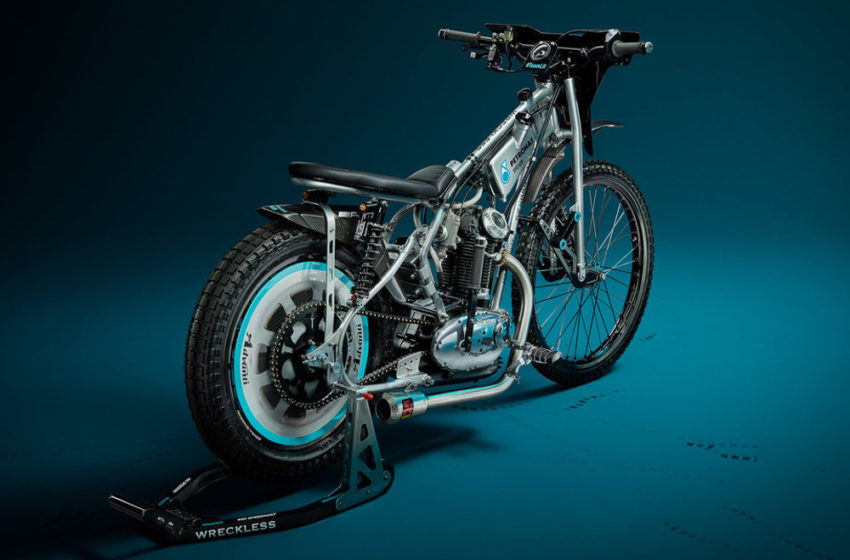 [vc_row][vc_column][vc_column_text]When i  saw the first pictures of Rick Geall’s custom  Kawasaki W650 i simply got hooked on the build not because it was complicated build but it was simple, yet very effective developed with two tone paint (black and white ) scheme that was sure to grab your attention and then I immediately wanted to know how Rick had build it and he said.

“The W650 was an accident, and not a bike that particularly fit with the Wreckless philosophy. I bought one by chance, and it just cried out to be built – no other reason than that. It ended up being our first build, despite the fact that we’d already started 2 more unusual projects at that point.

The W build just had its own momentum and the design ideas were locked in really quickly – it was a build that for the most part flowed easily.The idea for the W was the forerunner, the first example, of how I approach all build ideas.What do I like about the existing bike – try and accentuate.

What i don’t I about the existing bike – try and minimize, alter or remove.Try wherever possible to retain an echo of the original bike”.

The current build is exact opposite of what Rick has been building and its called as Ducati Speedway H4MM4 Motorcycle. The speedway motorcycle sport involves thin frame motorcycles that are light weight with lower displacement engines. Race involves riders to slide the motorcycles on sideways.

The same philosophy goes behind Ricks new intelligent innovation ” Ducati Speedway H4MM4 Motorcycle “.Now why do i say this is as a intelligent build the fact that Rick has used 450cc Desmo Ducati single-cylinder engine in Jawa speedway frame is combination of Italian mastery with Czech novelty not only strengthens the performance of entire build but also keeps the entire structure of the bike light.

For paint job color and logos of F1 Mercedes Team are used with Petrona’s logo in bold and the Wreckless logo on the single central bar .As well as there are other custom parts that are put on the bike.

This build is one of its kind from Rick and Wreckless Motorcycles that has to be highly appreciated.