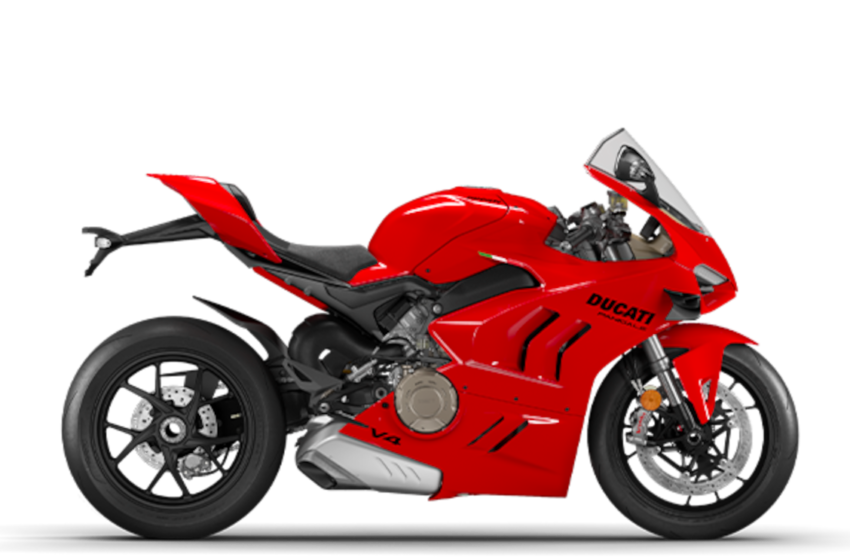 Ducati has launched the 2022 Panigale V4 range in India. The company has rolled out the V4, V4 S and V4 SP2 motorcycles.

Ducati is one of the most legendary bike manufacturers in the world. And its sportbikes are among the best machines ever built. But their price tags have always been on the higher side, leaving many of us to crave Italian masterpieces.

The variants’ prices start with

The company says that India is among the top five markets for the Italian brand globally. And introduced this range to cater to their insatiable appetite for big-displacement motorcycles.

Ducati claims the design changes are driven by aerodynamic performance gains. While ergonomics, engine, chassis, and electronics have also changed.

Apart from being aesthetically sharper, the overall design remains unchanged, including the twin-pod headlight assembly and an underbelly exhaust. The fuel tank also remains unchanged and stays muscular. It also gets the single-sided swingarm.

The result is a bike that is even faster on the track and, at the same time, increasingly intuitive and less fatiguing. Which is as high performance in the hands of the professional rider as it is rewarding for an amateur.

Let’s see what improvements Ducati has made in new V4 variants.

The heart of the bike is represented by 1,103 cm3 Desmosedici Stradale MotoGP-derived, which has undergone a series of updates. The Desmosedici Stradale completes a further evolution for 2022. Thanks to the introduction of some dedicated technical elements that allow an increase of power together with instant throttle response. 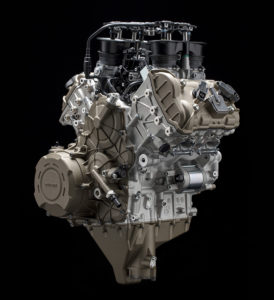 The diameter of the two silencer outlets has been increased to 38 mm (an increase of the gas section by 18% compared to the silencers of the MY2021). Reducing the backpressure in the exhaust and, consequently, improving the performance of the engine.

The new gearbox provides for a lengthening of the ratio for the first, second and sixth gears. Therefore, this new SBK gear ratio is more “racing-oriented” and more suitable for use on the track.

The first gear has been lengthened by 11.6%, while the second by 5.6%. Thanks to this new gearbox, tackling the tightest corners in first gear is more effortless, enjoying more excellent engine braking and better acceleration out of corners.

Ducati has implemented a new Power Modes logic on the Panigale V4 2022, providing four engine configurations: Full, High, Medium, and Low. The Full and Low configurations are newly designed, while the High and Medium configurations use a new strategy.

A new Ride by Wire map management system arrives for the High and Medium Power Modes, now dedicated to each of the six gears, which guarantees the rider the possibility of always having the optimal thrust when opening the throttle.

The Power Mode Low has been conceived to make road riding even more enjoyable, limiting the bike’s maximum power to 150 hp and offering a remarkably manageable throttle response.

The new Panigale V4 2022 fires up with the 1,103 cm3 Desmosedici Stradale (banked 42° back from the horizontal), a MotoGP-derived 90° V4 with Desmodromic timing, a one-of-a-kind engine featuring a counter-rotating crankshaft and Twin Pulse firing order. The engine can deliver 215.5 hp at 13,000 rpm and a torque of 12.6 kgm at 10,000 rpm, making for awesome road riding.

The engineers have designed the new engine around the Desmodromic system, a characteristic that helps make Ducati the fastest prototype of the top racing class in motorcycle racing. With this high-rotation engine, the “Desmo” achieves its maximum technical value, reaching levels of sophistication, compactness and lightness never seen before on a Ducati. 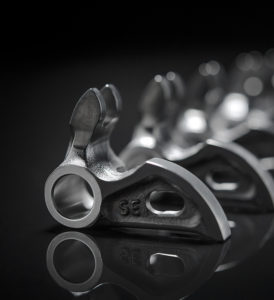 The Desmosedici Stradale has borrowed this technical solution to compensate for part of the gyroscopic effect produced by the wheels, making the bike more agile and precise when changing directions.

The counter-rotating crankshaft also generates a torque due to inertia that tends to lower the front end during acceleration and the rear end when braking, thus reducing the wheelie phenomenon.

Combined with the V engine layout, this particular shaft geometry allows for a unique ‘Twin Pulse’ ignition sequence. The distinctiveness lies in the two left-hand cylinders firing closely together, as do the two right-hand ones. On the timing chart, the ignition points are, then, at 0°, 90°, 290° and 380°. This particular firing order makes the V4 sound just like the MotoGP Desmosedici. 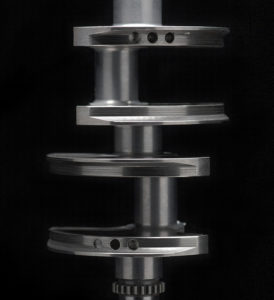 The first new feature of the new Panigale V4 2022 version has to do with aerodynamics. Ducati engineers concentrate their hard work on the fairing, which now integrates more compact and thinner double-profile design wings with increased efficiency. This update guarantees the same vertical load, up to 37 kg at 300 km/h.

Furthermore, the lower part of the fairing features redesigned extraction sockets to improve the cooling system and, as a consequence, the performance of the engine, in particular during racetrack days.

The lower part of the fairing features redesigned extraction sockets to improve the cooling system and, as a consequence, the performance of the engine, in particular during racetrack days. 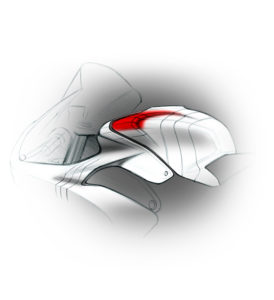 The Panigale V4 comes equipped with a state-of-the-art electronics package. Using the 6-axis inertial platform that instantaneously detects roll, yaw and pitch angles, all rider-assistance controls intervene accurately according to the bike’s position in space.

The Desmosedici Stradale is a stressed element of the chassis, and the admired aluminium Front Frame is directly connected to it. The chassis is completed by the lightweight magnesium front frame and the seat post made of shell cast aluminium, fixed at the top to the Front Frame and screwed below the head of the rear bank.

In India, the Panigale V4 range goes head-on against the Kawasaki ZX-10R and BMW S1000RR. 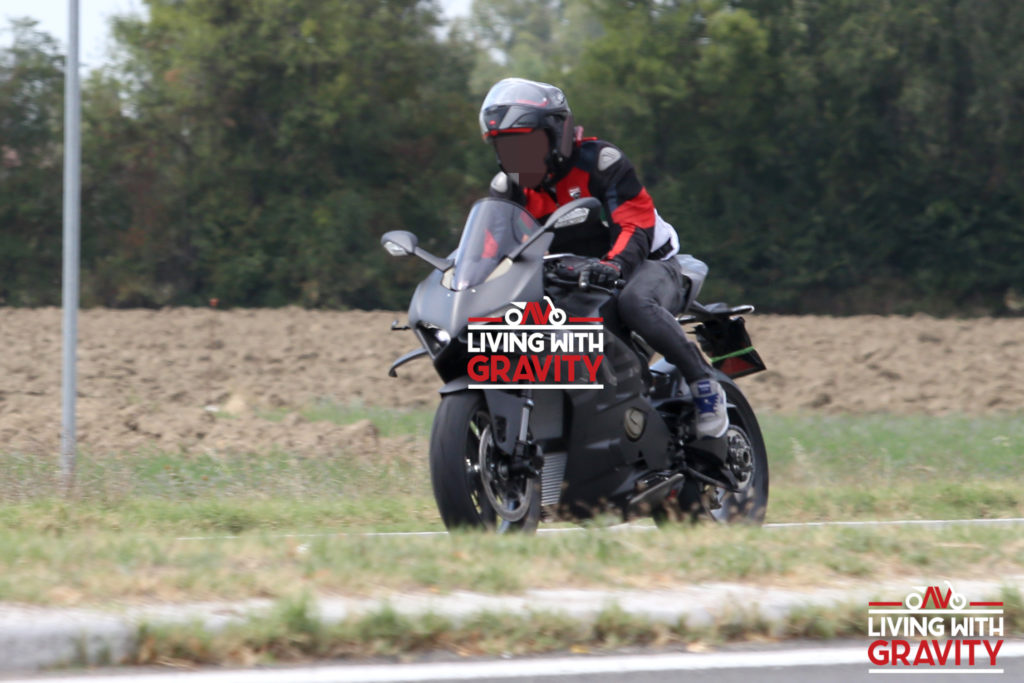 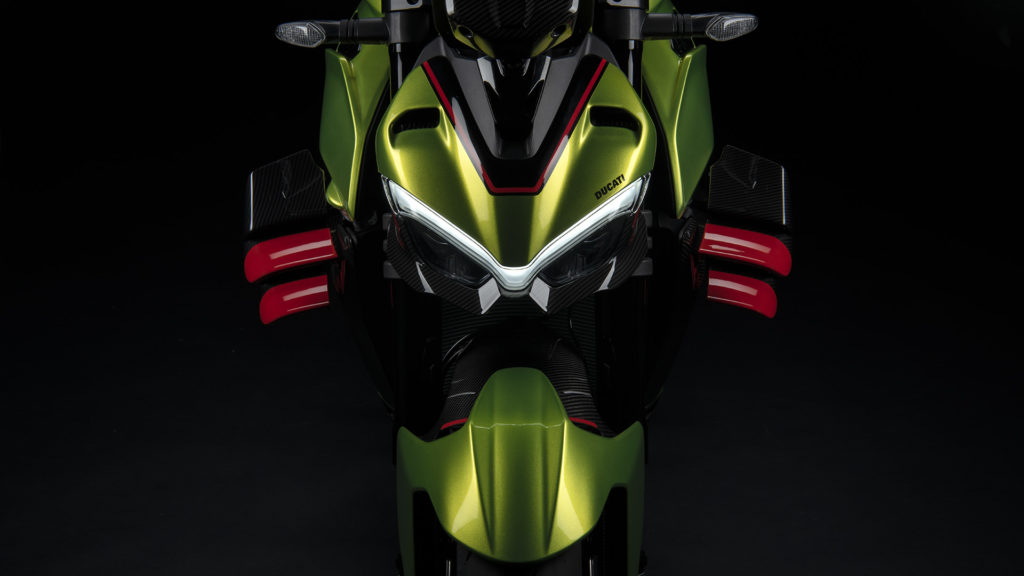