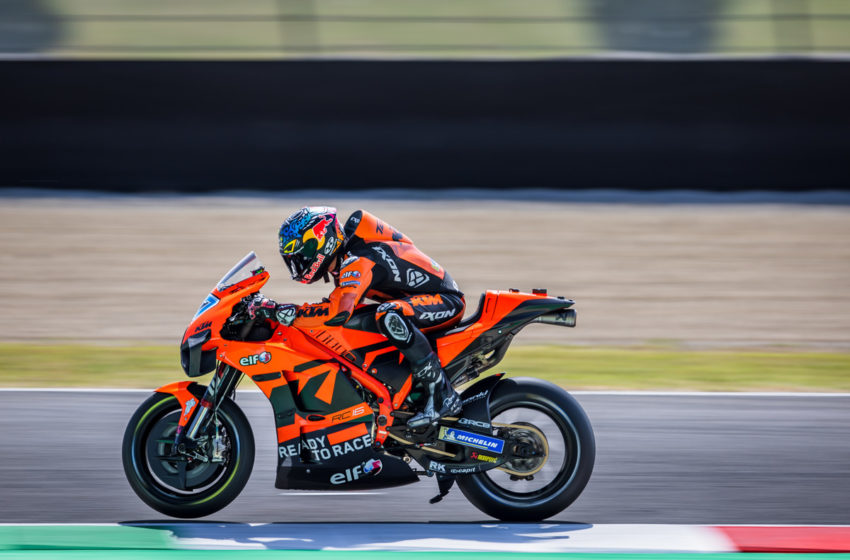 Miguel Oliveira and Brad Binder will start the eighth round of 2022 MotoGP from the 15th and 16th positions and the fifth/sixth rows of the grid at Mugello.

The Gran Premio d’Italia Oakley saw MotoGP fill the paddock space at a hot and humid Mugello circuit north of Florence. The scenic and spectacular course was hosting the FIM world championship for the 36th time and provided the usual test of cornering speed and flow and the daunting, snaking 1.1km fast home straight. 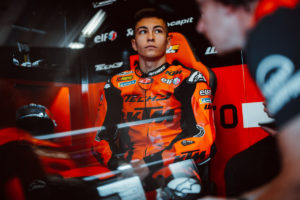 Sunshine and early summer weather affected Free Practice 1 and 2 on Friday, but the climate changed for Saturday when FP4 and the two Qualification outings – Q1 and Q2 – were run under dark, stormy and damp skies.

Brad Binder initially set a lap on Friday to sit in direct contention for Q2, but the South African could not progress in Free Practice 3 as the rest of the field marginally lowered the bar. All four KTM RC16s had to negotiate Q1, and both Binder and Miguel Oliveira set the pace with slick tires as the track started to dry in between flurries of rain.

Both riders would miss Q2 by just tenths of a second as the final minutes saw rapid changes to the order. A respectable effort by Tech3 KTM Factory Racing’s Remy Gardner meant the Australian ended the afternoon in 19th, his second-fastest Saturday slot of his debut term this year. Teammate Raul Fernandez was the 25th quickest. 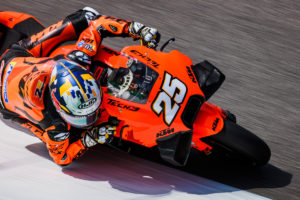 Miguel Oliveira: “We tried our best in qualifying to understand the conditions as quickly as we could, but we were still not fast enough to change to slick tires. It was hard to judge the grip, and it was hard to think if it would rain again.

A tricky session, and I just needed one extra lap because the potential was there for Q2. We’ll start from P15, hoping for the best because we had a tremendous FP3 session.

The conditions could be pretty different tomorrow, so we’ll have to analyze carefully, and what we choose to do will impact the outcome of our race.”

Brad Binder: “FP3 wasn’t the best session for me, but we made some changes for FP4. They felt better. I took the gamble of pushing for an early lap in Q1 before it became wet. It went well but then the rain never really came!

It was pretty breezy, so the track was drying in some places pretty quickly. I misjudged the session. Anyway, I’m sure I can have a solid race here. Things are not quite as they seem, and I know we can push forward.” 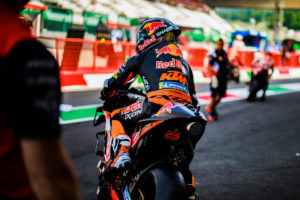 Remy Gardner: “It was a tricky qualifying session today. It was a shame that we did not get one more lap because I had a good rhythm, but it was a better result than expected. We have a few points to adjust tonight before the race.

We look forward to racing tomorrow here in Mugello.”

Raul Fernandez: “The target today was to improve my pace with a soft tyre, which we managed to do this morning during the third free practice. In the afternoon, the conditions were difficult for qualifying as it started raining. I made a mistake in not wanting to go out in slicks, so I would like to apologize to my team. Tomorrow we will try to do a better job.”

On Sunday morning, Red Bull KTM Tech3’s Deniz Öncü will stare at a clear track for the Moto3 race. The Turk toasted his second Pole Position of 2022 by less than a tenth of a second from bandmate Daniel Holgado. Red Bull KTM Ajo’s rookie Spaniard marked a personal best for 2022 with a space in the middle of the front row. Jaume Masia was 10th and just seven-tenths of a second from Öncü’s lap. Adrian Fernandez took 19th.

Deniz Öncü: “The weather conditions changed a lot today, so it was quite challenging. We did not start Friday perfectly, but today we are in Parc Fermé in P1, and we will start the race from the front. It is only half the job done, so let’s do a good race tomorrow. Thank you to my team. This is for them!”

Aron Canet won Pole Position, but Red Bull KTM Ajo’s Pedro Acosta was again roaming the top of the timesheets, only two weeks after his maiden Pole at Le Mans. The Spaniard qualified 2nd and just over a tenth of a second from his countryman. Teammate Augusto Fernandez was less than a second from P1 and will line up for the race from the 14th.

The Red Bull MotoGP Rookies Cup closed the Saturday timetable with the fifth dispute of the 2022 season. A wet race was grasped by Spaniard Maximo Quiles, who managed to limit the mistakes that saw at least three of his front-running rivals crash out.