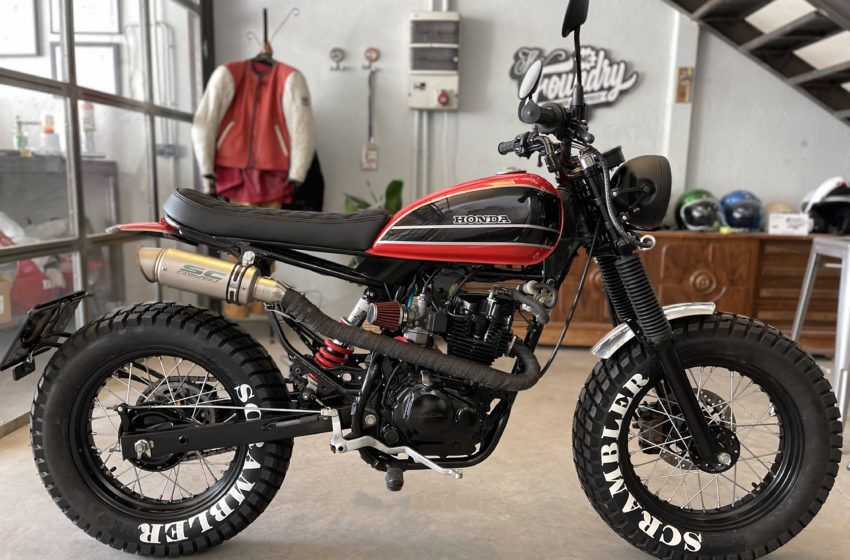 I have run what I call a small motorcycle studio since 2013. Generally speaking, the motorcycles that build my reputation are motorcycles that I had in mind. And that I wanted to do, such as the BMW K75 Street Tracker or the Yamaha XJ600 Café Racer that can be seen on my website.

Customers that look for me to build their motorcycles usually feel inspired by the motorcycles they see on my website or on the internet –Instagram, Tumblr or specialized websites such as Pipeburn or Bike Exif.

But when the moment of truth arrives, they usually restrain creativity. And in the end, the final build is much more conventional although probably more helpful in daily life. 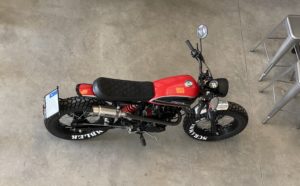 Luckily for the studio, sometimes a customer is willing to let himself be carried away by his passion and challenge the shop with a risky and unique project. It is the case of this simple Honda XL12R transformed into a very striking and different Tracker.

But the history of this bike is not casual, nor does it go through any particular development process. Because what happens if you suddenly fall in love with a motorcycle you have seen on the internet and want with all your heart?

What happens when that motorcycle cannot be legalized in your country because it is a model that was never sold there? Also, maybe some of its solutions are not legal, even if you could bring the bike? A motorcycle that – well – you could never legally ride around your city even if you could afford it? 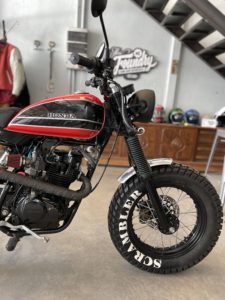 This was the situation when the customer contacted us and asked for advice. We answered that it would be possible to make a replica of the motorcycle with a different donor bike available in our country and make it a legal build for him to enjoy it without any issue.

The bike to be replicated is none other than the Bombardero from the Mexican manufacturer Azfer. A truly spectacular motorcycle built over a small engine Honda with an unmistakable style. 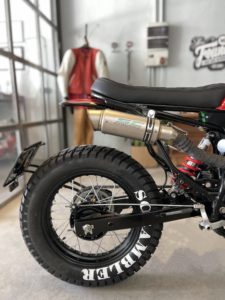 Once the steps to follow were defined, we started looking for a front end – complete suspension, trees and steering axle – that we got from a Yamaha SR125. The steering axle was slimmed in the lathe, adding new bearings to adapt it to the Honda frame neck.

Next, we disassembled the original wheels and mounted the 16″ rims on the 36-spoke hubs. Once the tires were mounted – two multipurpose DURO Median 130/90-16 tires pretty knobbies – the naked bike was mocked up to evaluate the work to do over the frame.

With the tank of the Suzuki GN125 in place, first, we realized the need to move tank mounts forward, bringing it as close to the handlebar as possible.

On the other hand, the drop in the middle área of the frame had to match the sideline of the original build. The laws in Spain do not allow modification of the frame of a motorcycle just as in the rear end. 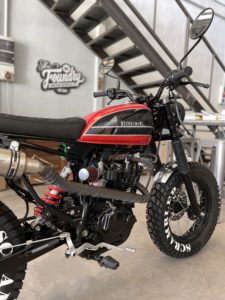 Anything that involves changing a chassis from – let’s say – the rear shock mounts has a high risk of not being legalized.

How it was done?

That is why we decided not to touch the lateral mounts of the frame, although they should be as empty as possible to leave that area in the air and thus reveal the rear shock absorber and its spring painted in red.

After removing the air filter, all the electronic stuff was visible, and it was a real challenge to hide it on a motorcycle that initially had a lot of plastic.

Our philosophy is to try to maintain the stock electrical wiring if it is in good condition, due to reliability issues and, above all, because we do not like the customer to depend exclusively on us for any problem.

In this case, the customer lives 700 km from our workshop, and things like a simple fuse could force him to send us the motorcycle. Because any workshop in the area dares to touch an electric setup that they have not done and cannot be monitored with the original wiring diagram. 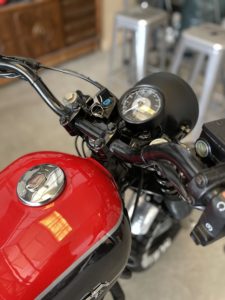 So to keep the electrical wiring – battery, starter relay, fuse box and control unit – and incidentally give a line of continuity to the side of the motorcycle.

We closed the area where the new subframe joined the original frame with sheet steel, creating a place for the latest Lithium battery and most of the wiring and fuses.

Finally, we cut the rear part of the frame to get closer to that of the Bombardero, even shorter and more radical.

As a rule, in Spain is mandatory for front and rear fenders. Both were hand-made in fibre for the rear and mirror-polished aluminium for the front.

Likewise, support for the license plate was fabricated where the dual-function indicators were integrated. 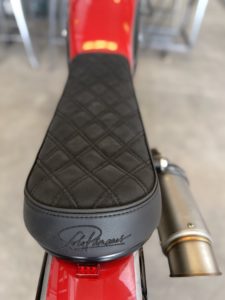 Up front, a Puig LED headlight and a Daytona digital odometer complete the setup. Custom-made seat upholstered by the client himself – a well-known motorcycle seat upholsterer in the country.

Black paint for the frame and wheels, a gas tank with the same colours as the Azfer’s Bombardero and huge Scrambler letters on the tires complete the replica. Next, enjoy the ride. 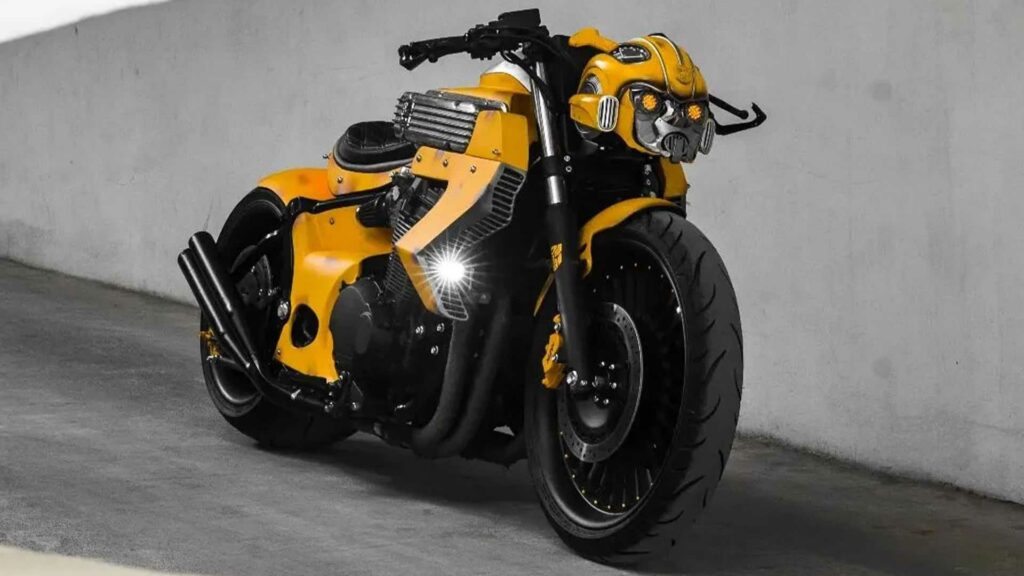 RH Customs ‘ Vision for a Bumblebee-Inspired...