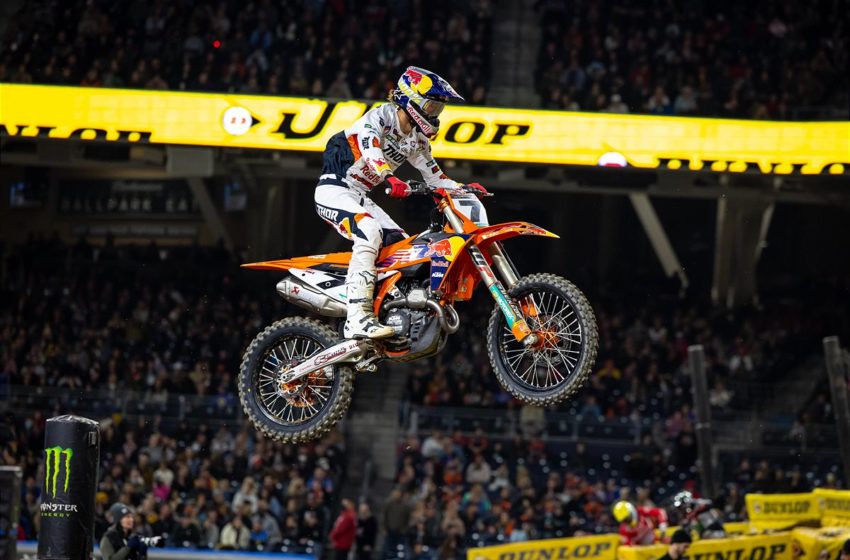 Red Bull KTM Factory Racing’s Cooper Webb landed just off the podium with a hard-fought fourth-place finish at Round 3 of the AMA Supercross Championship in San Diego. In what has already proven to be a fiercely contested title fight in the 450SX class, the reigning champion sits only one point behind in the early standings, while teammate Aaron Plessinger trails by four after a sixth-place finish on Saturday night. 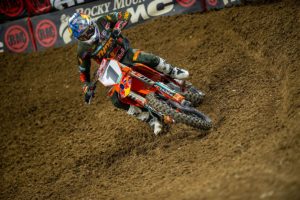 Webb overlooked a tough qualifying session earlier in the day, and he rebounded with an impressive heat-race performance to kick off the night’s racing. As the gate dropped for 450SX Heat 1, Webb assumed the early lead aboard the KTM 450 SX-F FACTORY EDITION. Racing mistake-free, the two-time champ led all nine laps to secure his first heat race win of the year.

In the Main Event, Webb got off to a top-five start, and he diced back-and-forth in the early laps before finding himself in a battle with his teammate, Musquin. Webb eventually moved into fourth, and he continued to battle inside the top-five. With four laps to go, Webb charged past Jason Anderson to overtake fourth, and from there, he rode strong to finish only 1.4 seconds away from the podium.

Cooper Webb: “It was a struggle today. The practise didn’t go great, and we fought hard in that Main Event giving it everything we had. We’re only one point out, so I can’t complain about that, but we’ll get to work this week. I wasn’t feeling great last week, and I didn’t perform very well. We’ve got some work to do on the motorcycle and me, so we’ll fight until the very end.”

Aaron Plessinger came off a podium finish at the last round to extend his momentum into the night. He caught a tough break off the start of 450SX Heat 2 when he got tangled with another rider and went down in the first turn. Starting in dead last on the first lap, Plessinger fought his way back up to secure the final transfer spot in ninth.

Plessinger found himself mid-pack off the start with a tough gate pick for the Main Event, but he quickly charged into eighth early on. Making steady moves throughout the race, Plessinger worked his way up to the top-five battle, where he ultimately secured a sixth-place finish on the night. 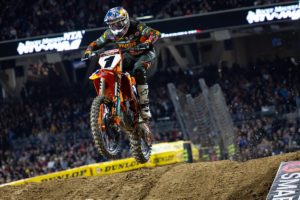 Aaron Plessinger: “It was a tough day – Just couldn’t get into a flow on the track. Had an outside gate pick in the main, and I made the best of it. Came around maybe 10th or so and just clicked off lap after lap, and then I passed some people and worked my way up to sixth. As bad as I thought it was, sixth is still a pretty good result for points, so we’ll go back this week and do our homework and come out swinging at A2.”

Marvin Musquin had a positive start to the day with a season-best qualifying finish in fourth. He got off to a top-three start in 450SX Heat 1, and he diced upfront early on before settling into second place behind his teammate Webb. He chased Webb down in the final laps and pressured him to the checkers, finishing 0.814 seconds away from the win.

The Frenchmen nailed his start in the Main Event, just missing the official holeshot, and assuming the early lead right away on the opening lap. He maintained the lead for the first three laps, but he lost his footing when another rider came in on the inside to overtake the lead spot. From there, Musquin lost his early momentum and found himself shuffled back to mid-pack, ultimately finishing 10th on the night.

Marvin Musquin: “We got better throughout the day, which was good, and I put myself into a good position for the heat race. Had a good ride in the heat race. I charged up to Cooper and got close to him for the second. I had a great gate pick in the main, and I pulled the holeshot, which was amazing. Got passed by Chase [Sexton] and lost rhythm, and everybody behind started passing me to the inside. That was a unique track with those 90 degrees turns. After that, I started racing backwards and thinking behind instead of forward, and unfortunately it killed me.” 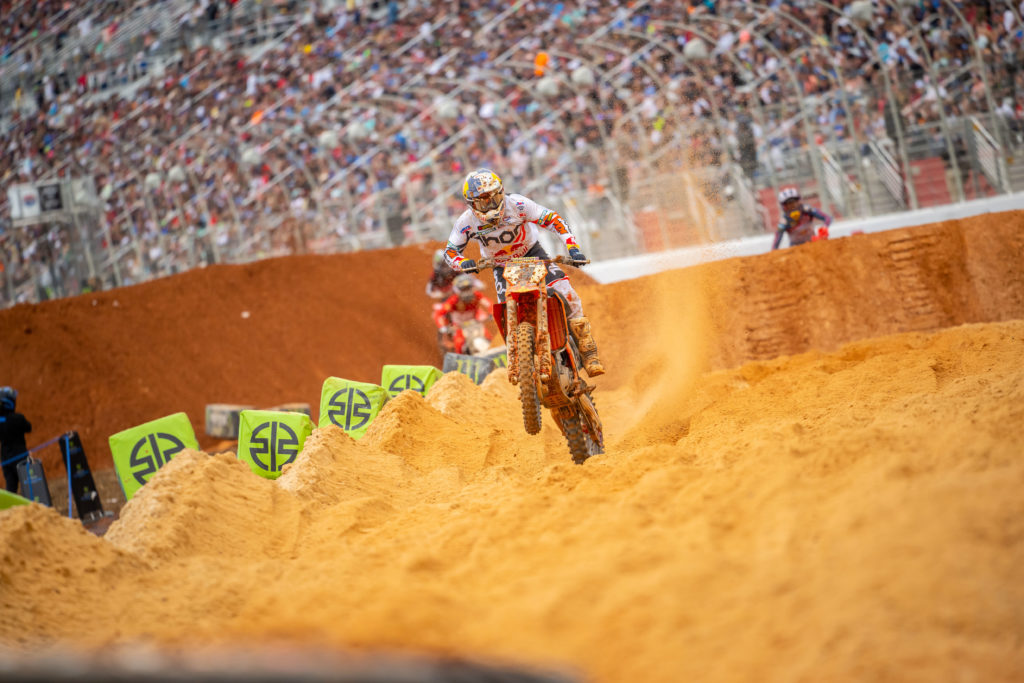 Webb bounces back with a fighting performance... 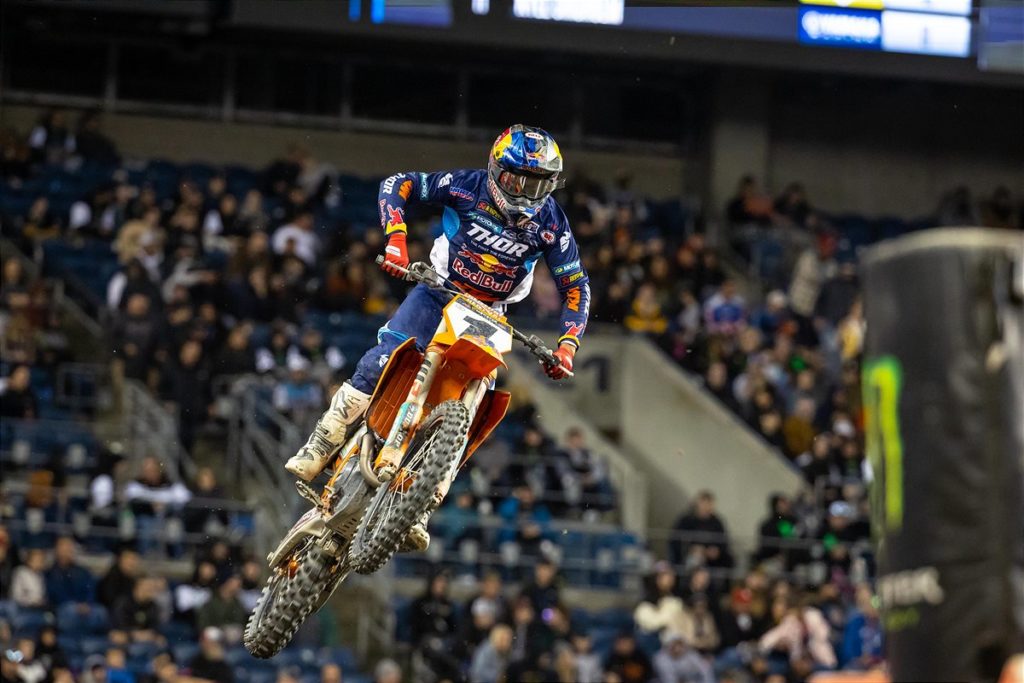 Cooper Webb is out for St.Louis SX 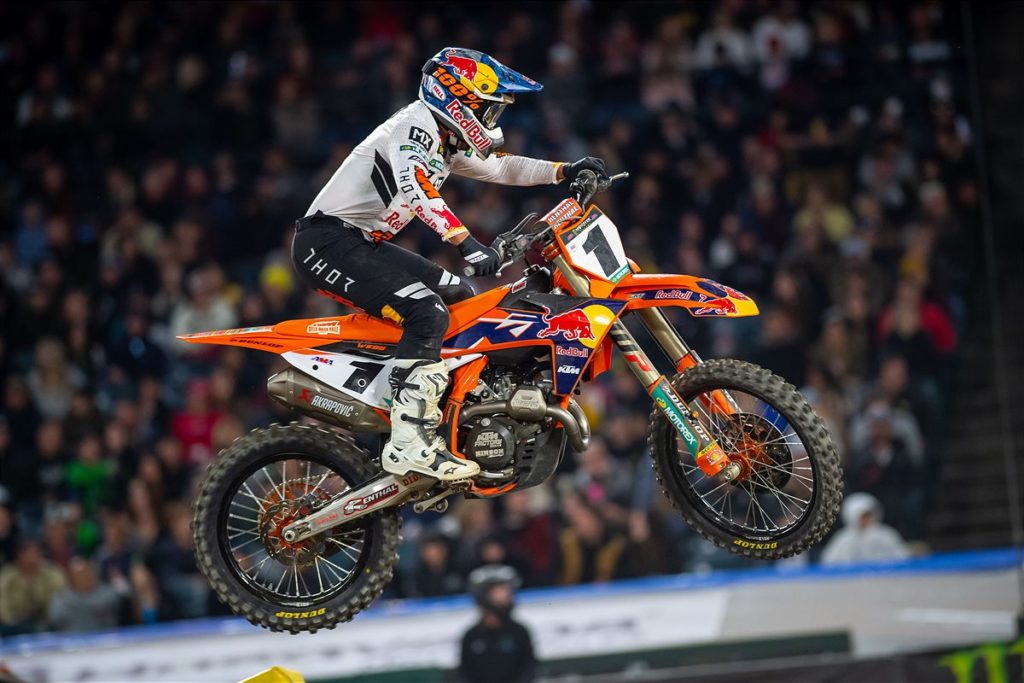