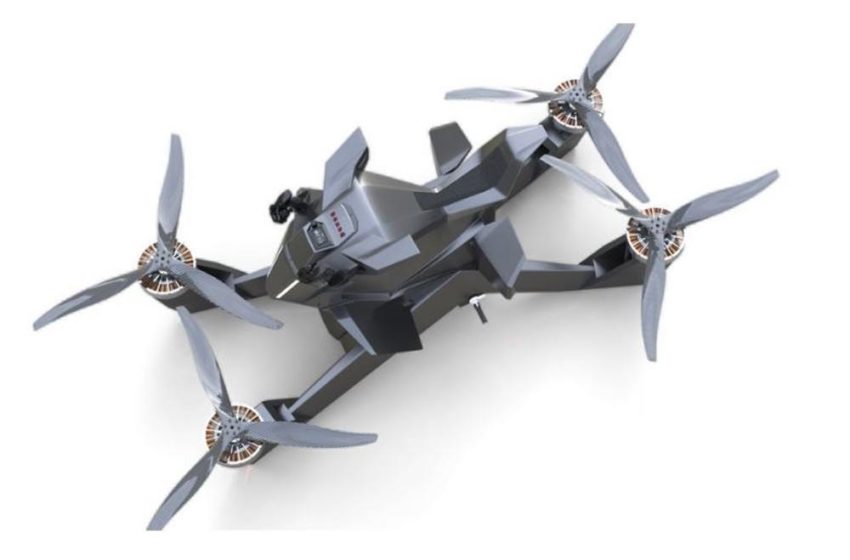 People have always dreamt of taking off and moving through the air.

Vertical take-off and landing (VTOL) abilities, played a crucial during da Vinci’s time. Around 1490 he portrayed an airplane with a flying screw, which is an establishment to the present helicopters.

Although he was not successful to put his vision in practice, but he did left the path to create vertical mobility innovations for us.Some 2,500 years before Chinese had already applied this principle of upward vertical motion in the form of a vertically ascending toy.

Analysis show us that this dream of flying and passenger services have the probability to become a global market worth $3 trillion by 2035.Not bad isn’t it.

Now to prove this California based Hoversurf a year back made a practical flight of this bike they call it as “HoverBike S3″ and this bike was soon inducted in Dubai Police Squad purpose to save time in traffic giving them a better value proposition.

Hoversurf is also the first member to enter the new emerging market called as eVTOL (Electrical vertical take-off and eVTOL landing) by making this flight practical.

Hoversurf analysed and have understood the current problem statement in detail which is people getting stuck in traffic for long hours, environmental pollution and therefore they say “We give people the opportunity to overcome obstacles on their way and quickly move around in space, solving the problem and TRAFFIC environmental pollution”.

Well that’s right and I go with them because no wants to waste their time in traffic.

And from that’s where the idea was brought into practice. While the Mission of the organisation is to “Is the ability of ﬂight for everyone. Freedom without trafﬁc jams and traffic lights”. Hoversurf has been putting some serious efforts to make this dream turn into reality.

Current team is led by Alex Atamanov, CEO who is not only visionary but had successfully founded and sold numerous other businesses prior to Hoversurf USA.

Next in command is Joseph Segura-Conn, COO. He commenced work as an independent contractor with Tesla, Mercedes, Facebook, as well as other Fortune 500 companies.

With 2 advisors plus 9 members in team. Form the entire Hoversurf.

Not to forget this team achieved all this in a short time and with only $ 2.4 million raised. That’s some brilliant stuff.

A revolutionary one seat personal drone –  A HOVERBIKE S3 simple, lightweight personal drone that has allowed Hoversurf to explore all their technologies for the future market. This is patented technology by Hoversurf. 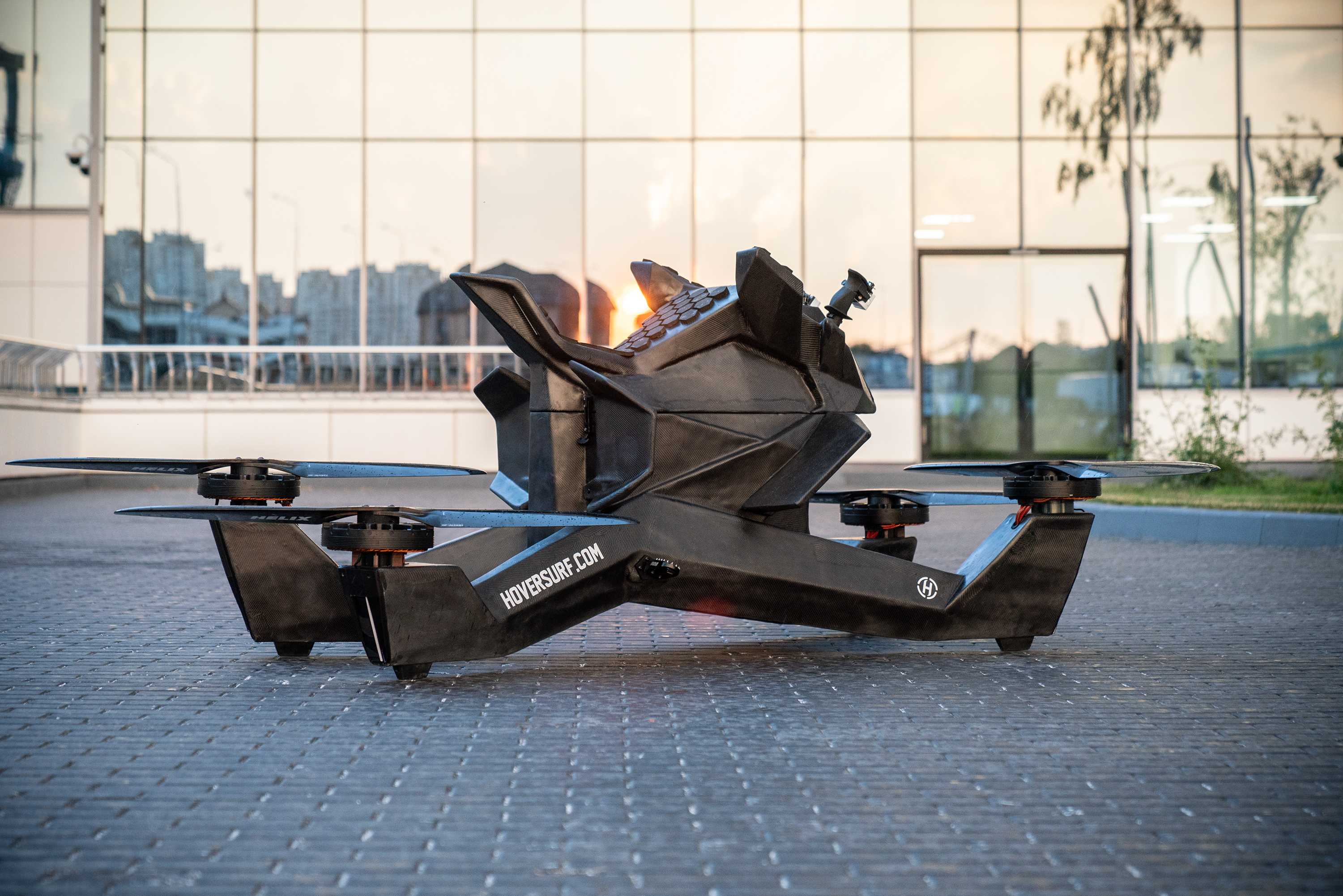 The platform is supported by 4 propelling blades on each corner having a power to lift the entire bike. The components are made up of high quality material making the platform lighter.

Hoverbike frame: a supporting power platform, made in the form of a spatial carbon monocoque. The overlap of the cross forming is reinforced and fixed by power plates from below and from above. On the end sections of the power platform, independently working sensored engines with propellers are mounted on the beams.

Above the center structure of the supporting power platform a module containing our computer, on-board flight system, sensors, battery and generator are all housed.

The whole frame is made by a single element, which gives the stiffness of the structure all while reducing the weight by a factor of 2 compared to our previous aluminum model.

The new ergonomics of the pilot’s seat allows a person to sit comfortably at any height. In this model, stability is improved by spacing the axes by 5 cm (1.9 in).

In this case, the dimensions of the hoverbike allow it to be rolled in a standard doorway while also having ability to take-off and land from an ordinary parking space.

Our safe flight altitude is 5 meters above the ground (16 feet), but the pilot himself can adjust the limit to their comfort-ability. The maximum speed is limited to 96 km / h (60 mph or 52 knots) according to the requirements of the law.

Hoverbike S3 has cool design and it looks like a small single seat aircraft accompanied with 3 buttons to start and stop function and square shaped console for a rider to track every detail and it comes with two joysticks to man-oeuvre around.

Hoverbike S3 2019 contains this hybrid type battery with a capacity of 12.3 kWh, which allows you to fly up to 40 minutes in the drone mode. The actual flight time with the pilot is between 10 to 25 minutes dependent on weight and weather conditions.

A new portable home charging pack allows quick charging in as little as 2.5 hours without removing the batteries.

​A passive cooling system, which operates due to the difference in air pressure above and below the propellers is now built into body.

New engines with increased power to 33 kW each. New 3-bladed carbon propellers are quieter by 10% than double-bladed propellers, smaller in diameter by 5 cm and give a total thrust of 364 kg (802 pounds).

Hoversurf’s new flight computer consists of 3 separate blocks connected by CAN bus with its own processor in each unit, an external information display, a tuning system, and an updated firmware V.1085 which is designed specifically for a hoverbike S3. Auto-take-off (AT), auto-landing (AL), Alt Hold, Manual, and RC control are also  available.

However I feel the blades should be covered to provide safety which I think Hoversurf may plan to do in their future versions.

The seat is provided in a way where rider has to lean forward to hold the joystick giving a good support to elbows of the riders when leaned.Once the Hoverbike S3 starts it lifts like a helicopter for few seconds and then moves ahead.

Exactly in Sep 2017, Hoversurf S3 bike made the practical flight on Moscow raceway making it the first bike to fly.

As Hoversurf took crucial one step ahead in future I would like to wish them best of luck and hope Dubai police enjoys their new flying vehicle in their armada after those luxury sports cars.

And I am sure these flying vehicles are going to evolve as we move ahead. 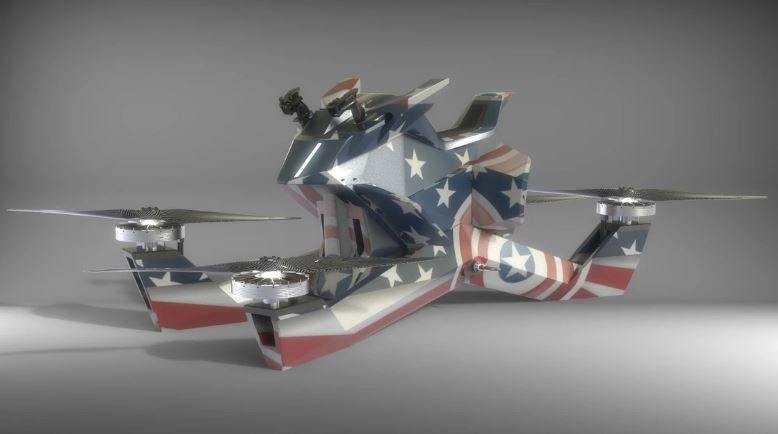 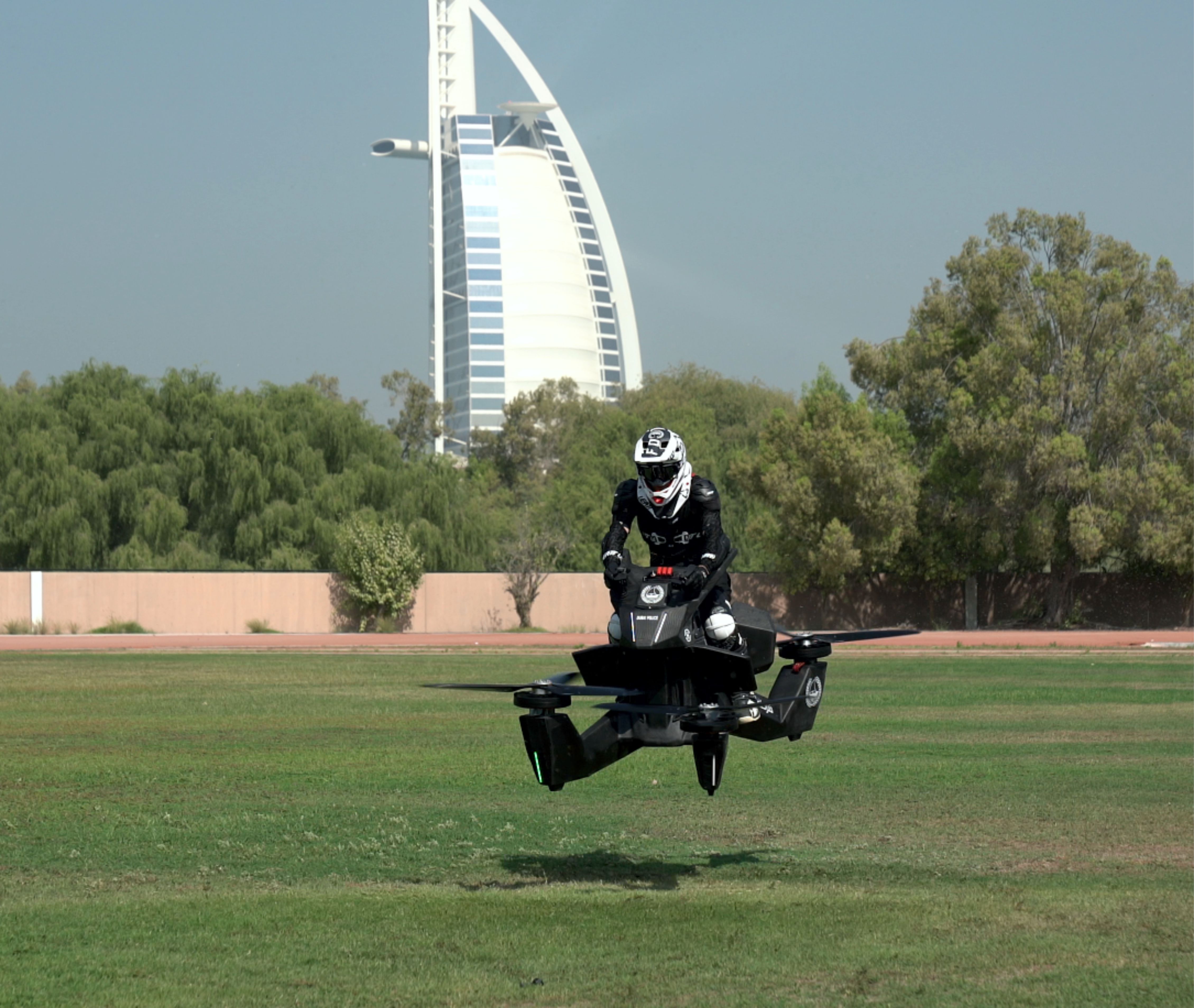 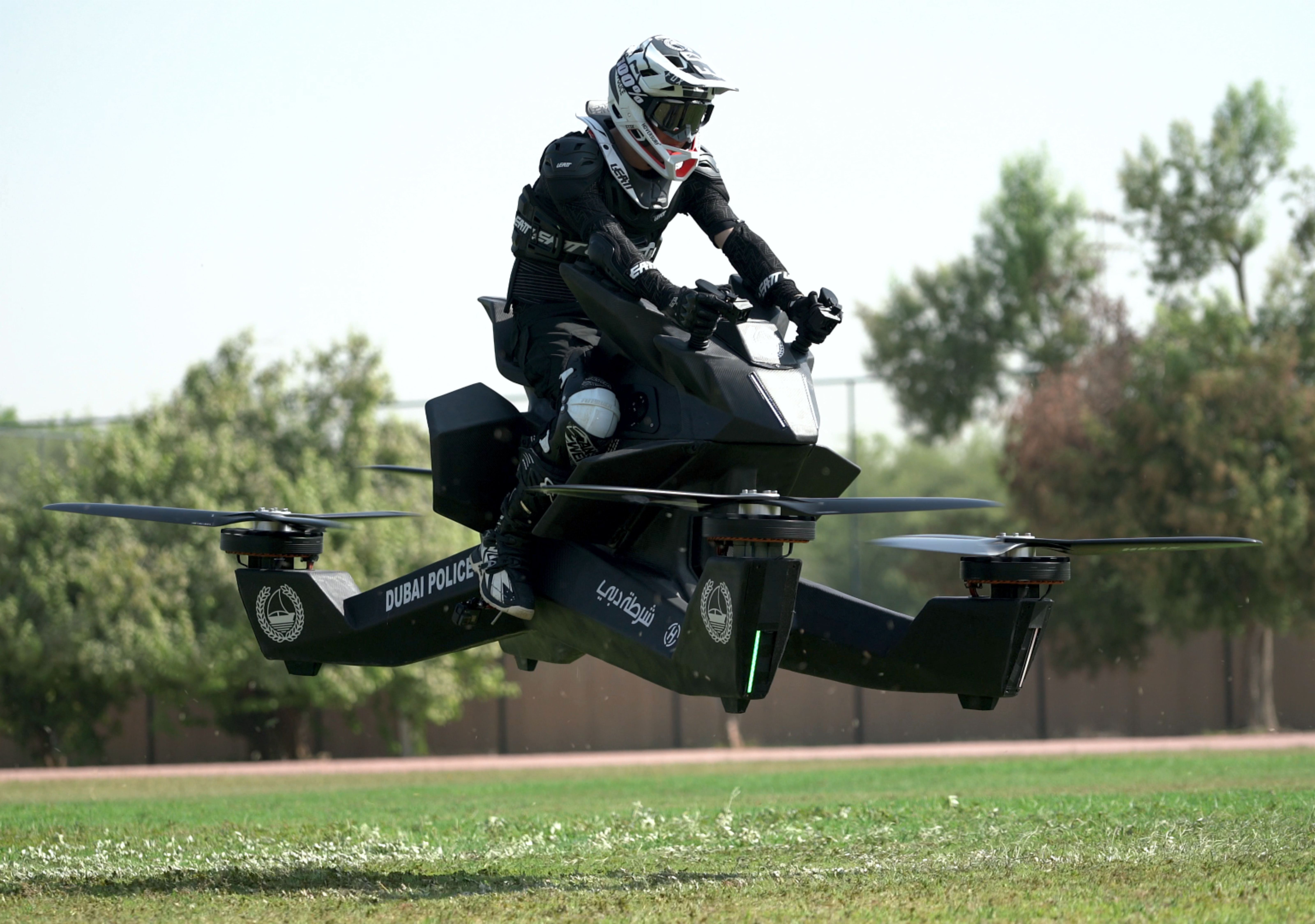 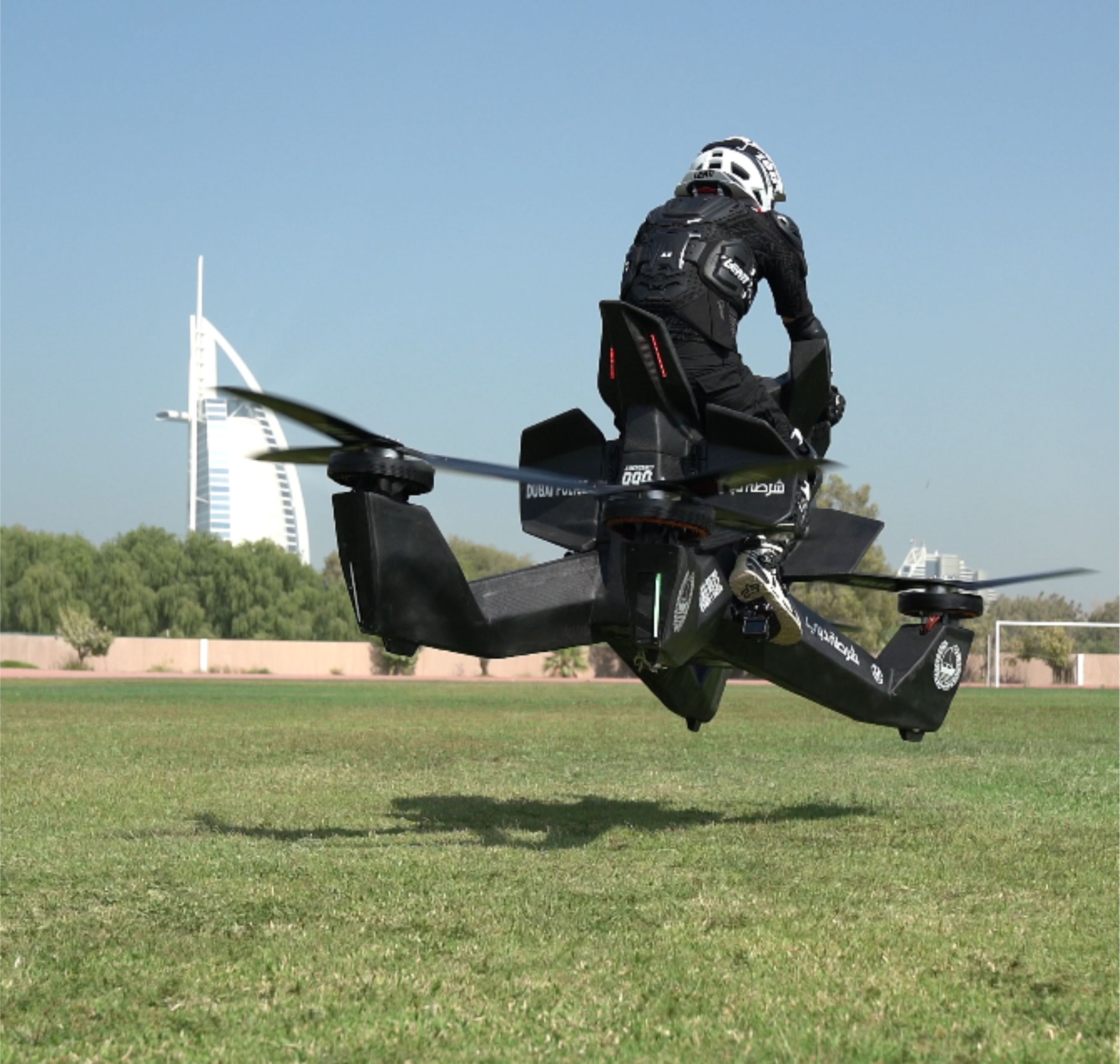 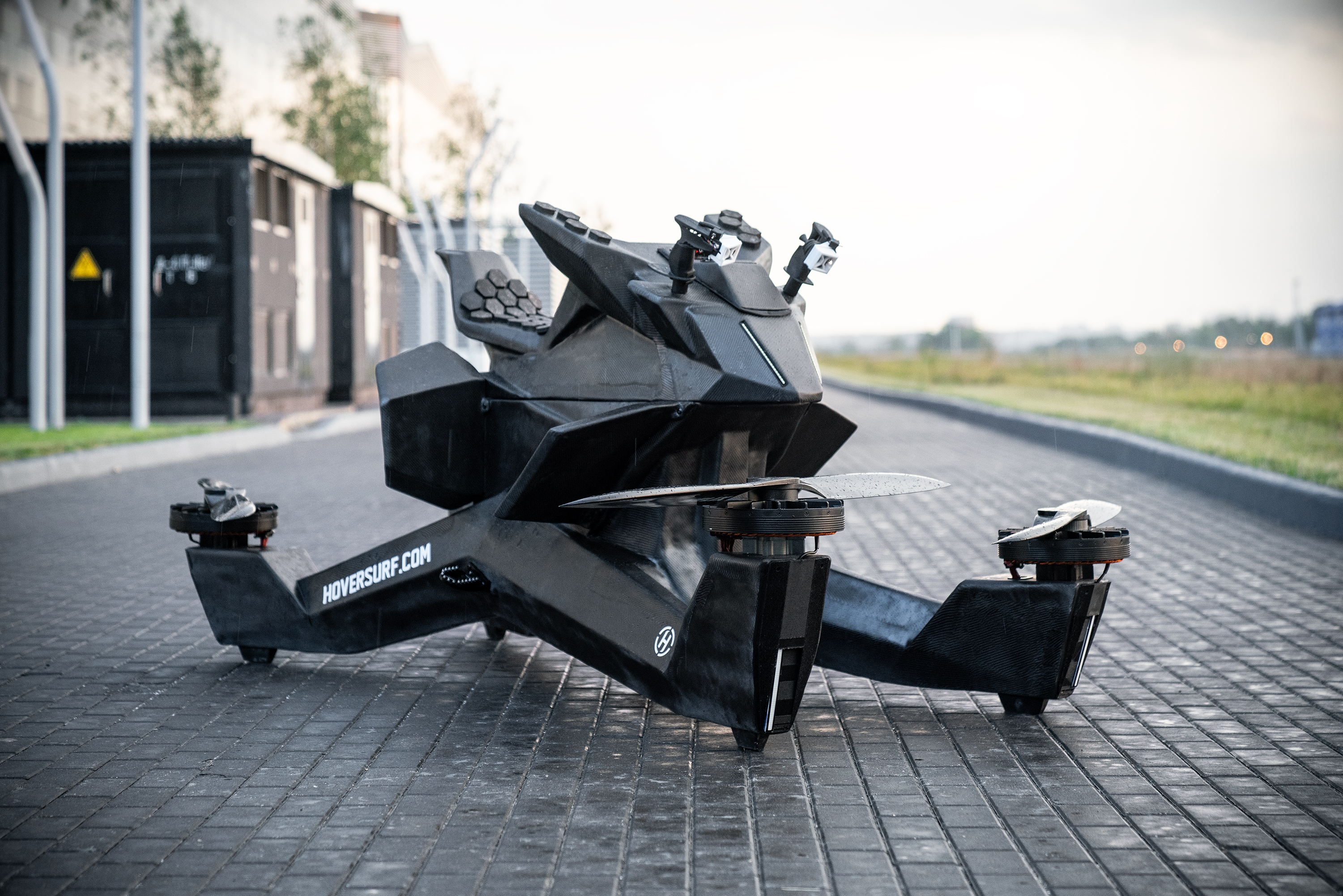