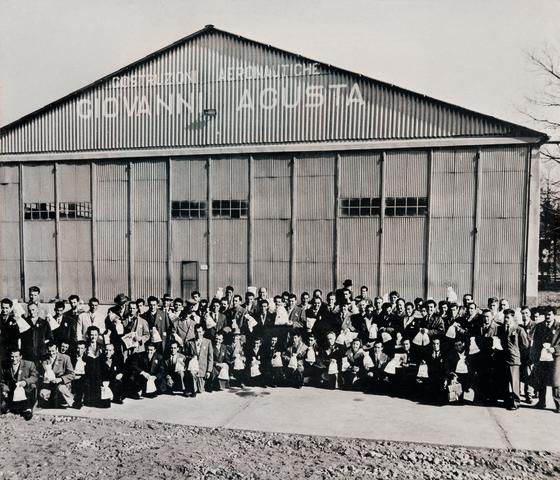 In its 75 years history, the one habit that MV Agusta has never lost is the habit of winning. On every front: from the racetracks, with its unrivalled record of 37 world-championships victories .

To showrooms and fairs around the world, where its bikes are considered true icons of style and motorcycle art. 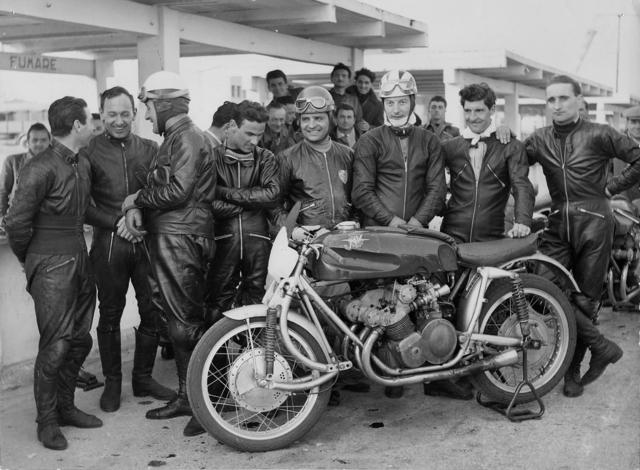 It all started on January 19, 1945, with the establishment of Meccanica Verghera Srl in Cascina Costa . Near today’s Malpensa international airport.

The Agusta family, pioneers of the aviation industry, unable to continue manufacturing aeroplanes in the aftermath of WWII .Turned to motorcycles to express their passion for speed, adrenaline and precision engineering.

Legend has it that the first model, a 98 cc, was due to be called “Vespa” . But the name was already taken, so it went down in history simply as the MV98. 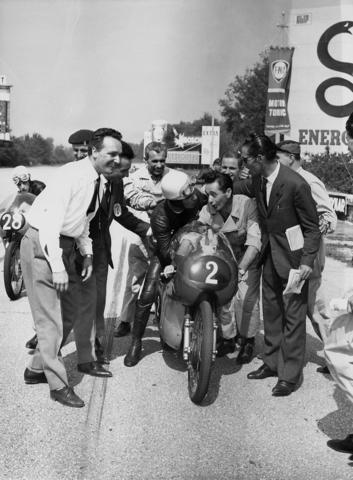 The Agustas also knew how to convert their racing motorcycles into successful production road model. For a public of passionate enthusiasts.

And started right from the beginning with a luxury version of the 98 that made a sensation at the 1947 Milan Trade Fair.

Since then, every new MV Agusta model made its mark in the history of motorcycling. And still today the launch of a new model or range is a much awaited event.

Count Domenico Agusta had a knack for hiring the best riders. Most of which became legends of the sport: Franco Bertoni. 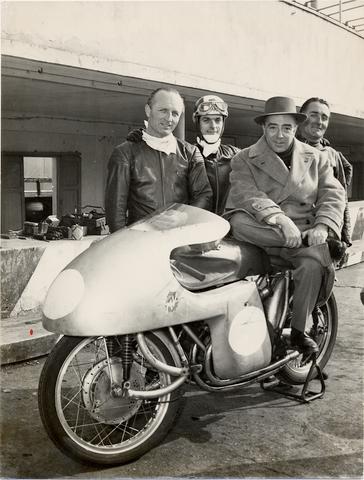 Throughout the 30 years of the Agusta era. The history of their victories intersects with the launches of equally legendary and successful MV Agusta production models. 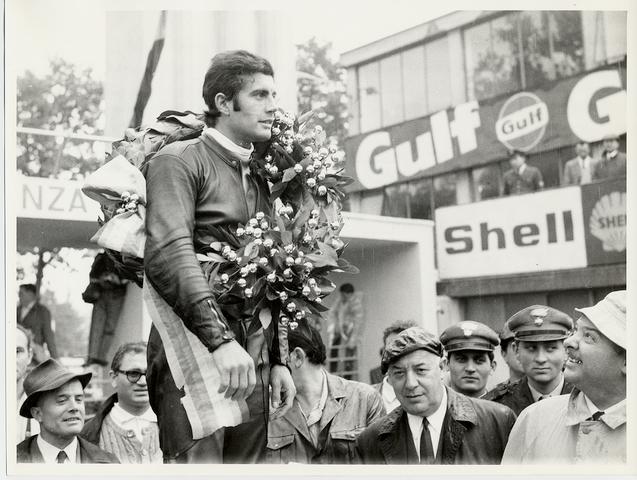 The partnership with Giacomo Agostini was the most celebrated in the history of motorcycling: in his career.“Ago” won 13 Wold Championships, 18 Italian titles and 10 Isle of Man’s TTs.

Count Domenico passed in 1971, and after Agostini’s last victory at the Nürburgring in 1976.The destiny of MV Agusta seemed to have come to an end, until the Castiglioni family decided to give it a new lease of life.

In 1992, Claudio Castiglioni’s Cagiva acquired the MV Agusta brand. And moved production to its facility on the shores of lake Varese .In Schiranna, where MV Agusta motorcycles are still produced today. 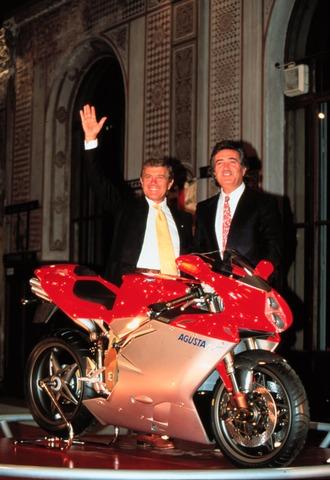 Under the visionary guidance of Claudio Castiglioni the brand never ceased to represent. Italy’s best motorcycling tradition and even acquired further prestige and recognition.

Castiglioni single-handedly revolutionised the motorcycle industry, heavily investing in R&D and in production. The four cylinder, 750 cc F4 was the first bike of the new era, and also the first superbike.

It is still considered “the best looking bike ever”. Claudio also invented the concept of the “naked” bike. A new paradigm in the motorcycling world. 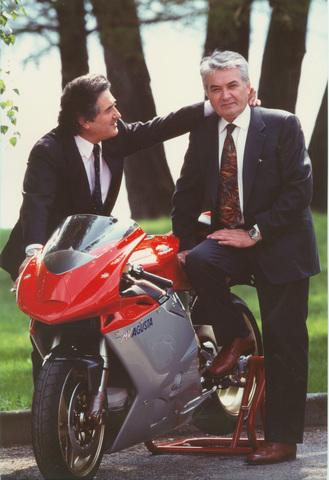 After his premature death in 2011, his son Giovanni succeeded him. At the helm and continued in the family’s pioneering tradition.He actively sought and developed partnerships with world-class names such as Pirelli and Formula1 champion.

Lewis Hamilton to further broaden the reach and the appeal of the brand. Giovanni was behind the creation of the “Brutale”, the ultimate naked, and the F3. The best middle-weight sports bike with an inline-three cylinders engine and a counter-rotating crankshaft. 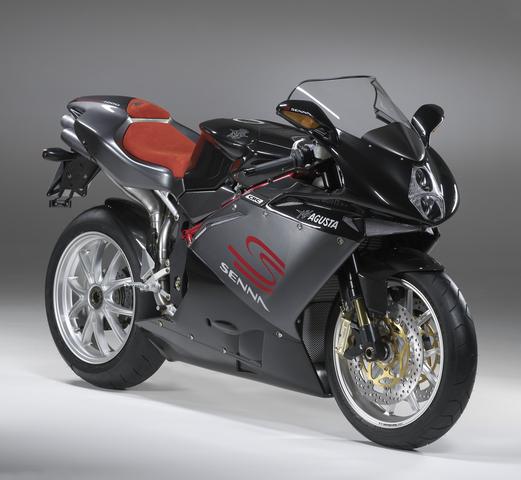 Under his guidance, other remarkable models such as the Dragster and the Turismo Veloce. An opening into the tourers’ world. As well as successive evolutions of the F3 and F4, were acclaimed both by critics and motorcycling enthusiasts.

In 2017, the company was ready for a new important step in its history of continuing growth .And new capital was brought in by ComSar Invest . A Luxembourg company belonging to a family of entrepreneurs . Who share the same pioneering spirit and passion for speed as the Agustas and the Castiglionis. After an initial and successful partnership phase. In 2019 the Sardarov family acquired 100% of the company’s capital .And Timur Sardarov, MV Agusta’s present CEO, was ready to take on a leading role.

Under his leadership, MV Agusta’s new roadmap strongly focussed on stability, quality, customer relations, service and .On the expansion of the product range and of the sales network.

Concepts such as connectivity and digitalisation of the product were also introduced. In terms of Customers relations, there was a clear effort in listening and paying attention.Building a supportive community and working closer to customers in order to increase loyalty. 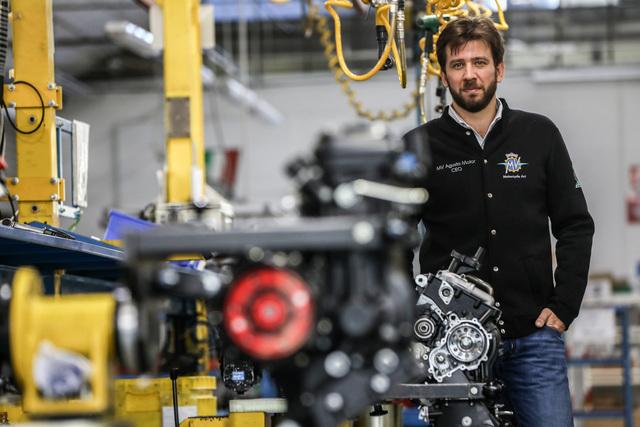 New MV Agusta models such as the Serie Oro limited editions of the Superveloce 800 and Brutale 1000 RR, a tribute to the brand’s legacy of design. Speed and leading-edge technology, were immediately recognised as true champions of. The MV Agusta spirit for the joy of all the fans around the world.

In 2019 the Superveloce 800 Serie Oro made MV Agusta an “Excellence of Lombardy’s Design”, a sure sign of its pure MV Agusta DNA. Sardarov also immediately concentrated on the reorganisation of the company to stabilise it financially and continue in its successful growth path.

He brought in a number of highly respected managers with a proven track record in the industry and constituted a new. Highly skilled and experienced best-in-the-industry management team.

This strategy for MV Agusta’s new course is contained in the five year business plan that was recently announced.

It clearly sets out the idea of expanding the reach of the brand through both organic and structural growth.With the objective of increasing the annual sales volumes to 25,000 units, with over 20 new models in the next 5 years.

New segments will be tackled, with the launch of an entry-level range appealing to a younger audience. And also with the return of smaller displacements such as the 350 cc to expand into new markets, in particular Asia.

An important partnership was established in 2019 with China’s Loncin for the production . And distribution of this new mid-size range. Research and Development remains a fundamental pillar of MV Agusta’s strategy as leading-edge technology. And design are the unmistakable hallmarks of the brand.

Timur Sardarov, CEO of MV Agusta Motor S.p.A., commented “Being at the head of MV Agusta at this historic moment in time is exciting and challenging.

I consider it a great privilege, and also a great responsibility, but looking back at MV Agusta’s legacy.I know we are standing on the shoulders of a giant .

And this gives me great pride and confidence in breaking new ground every day. Launching innovative technology, new incredible models, and expanding into markets we have never entered before.”

Official celebrations for the 75th anniversary of MV Agusta will be held in Varese on June 20 & 21.