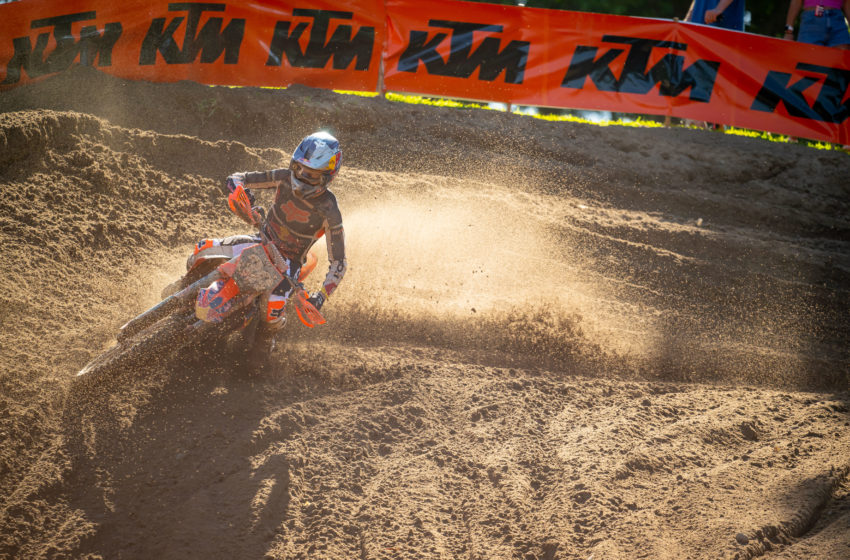 The Red Bull KTM Factory Racing team took on one of the most physically-demanding races of the AMA Pro Motocross Championship with the circuit’s only iconic sand track – The Wick 338.

It’s no surprise that team rider Aaron Plessinger rose to the occasion for a podium-filled day in the 450MX class, racing his KTM 450 SX-F FACTORY EDITION to a season-best third overall with 7-3 moto finishes in Southwick, Massachusetts.

Plessinger, a rider known for his versatile riding abilities in all-terrain, put all the pieces together in some of the most gruelling conditions of the season. The Ohio native had a bit of a slow start to the day, qualifying 19th, but he turned things around at the drop of a gate and proved only to get stronger as the day went on. In Moto 1, he got off to an eighth-place start and battled there for the first five laps.

Climbing up to sixth midway through, he fought hard to break into the top five late in the race, but a mishap with his tear-offs cost him a position with a few laps to go, ultimately finishing seventh. With a strong start in Moto 2, Plessinger immediately worked up to second, chasing after the leader for the first half of racing.

Dicing back-and-forth in a heated battle between second and third, Plessinger eventually settled into third late in the race, and he finished strong with his first moto-podium of the season in third. 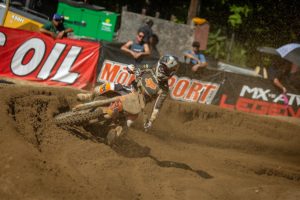 Aaron Plessinger: “It was an interesting one today! I felt good qualifying, but the numbers didn’t show with P19. In the first moto, I was feeling good and started flowing and caught up to almost fifth and then lost my tear-offs in the last few laps, so I ended up seventh.

I got off to a sick start on the second moto, and Eli and Kenny were battling there for a bit. I got by Kenny and tried to pace Eli for a bit, but Chase was on rails, and I started making a few mistakes at the end. Overall, it was a perfect day, and I’m heading into Spring Creek with high confidence.”

It was a steady day for Ryan Dungey, who battled around the top-five for most of the racing. In the first moto, he powered his KTM 450 SX-F FACTORY EDITION to a top-three start, battling up front in second for the first couple of laps until a tip-over dropped him back to fifth early on. Re-mounting inside the top-five, Dungey rallied back up to fourth with a strong finish just off the box.

In the second moto, he started in sixth and quickly charged up to fifth by the second lap. Racing between sixth and seventh for the rest of the moto, the multi-time champion did his best to prevail through the physically-demanding conditions late in the race to come away with a seventh-place finish in Moto 2.

Halfway into his “comeback season,” the veteran rider holds an impressive fifth-place standing in the 2022 450MX Championship points. 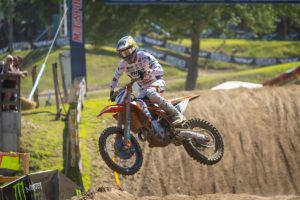 Ryan Dungey: “The day was pretty good. I got a good start in the first moto, and I actually had a tip-over and recouped still in fifth. I was able to make a pass on Kenny for fourth and pretty much hung there for the rest of the moto, so I was happy with that.

The first half of the second moto was solid, but I ran out of steam in the second half. I have to keep being patient – physically, it was more challenging than usual – but we’ll try to keep building and get the bike better. I’m excited to go to the hometown race next weekend and try to put in a good showing there.”

With a season-best qualifying position in the 250MX class, team rider Max Vohland had a positive start to the sixth round. Carrying that momentum into the first moto with an eighth-place opening, Vohland charged his KTM 250 SX-F FACTORY EDITION into a top-five position just after the midway point.

Running a fast pace up front in the gruelling sand, Vohland started to hit a wall late in the race and ultimately dropped back to a ninth-place finish.

Still feeling the effects of Moto 1 fatigue, Vohland powered through the second moto as best he could, salvaging some points with a 14th-place finish. 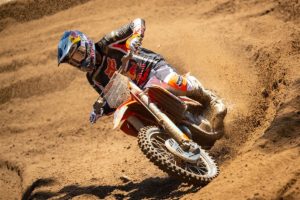 Max Vohland: “I qualified the best all year and rode fast in the second qualifying practice and into the first moto with a top-10 start. I moved up to fifth, and I was riding well, and then just hit the wall, as they say. I felt like I didn’t have anything left and was trying to survive that second moto. I need to work on that endurance.”

The 2022 AMA Pro Motocross Championship heads to Millville, Minnesota, next Saturday, July 16, for Round 7 of the 12-race series. 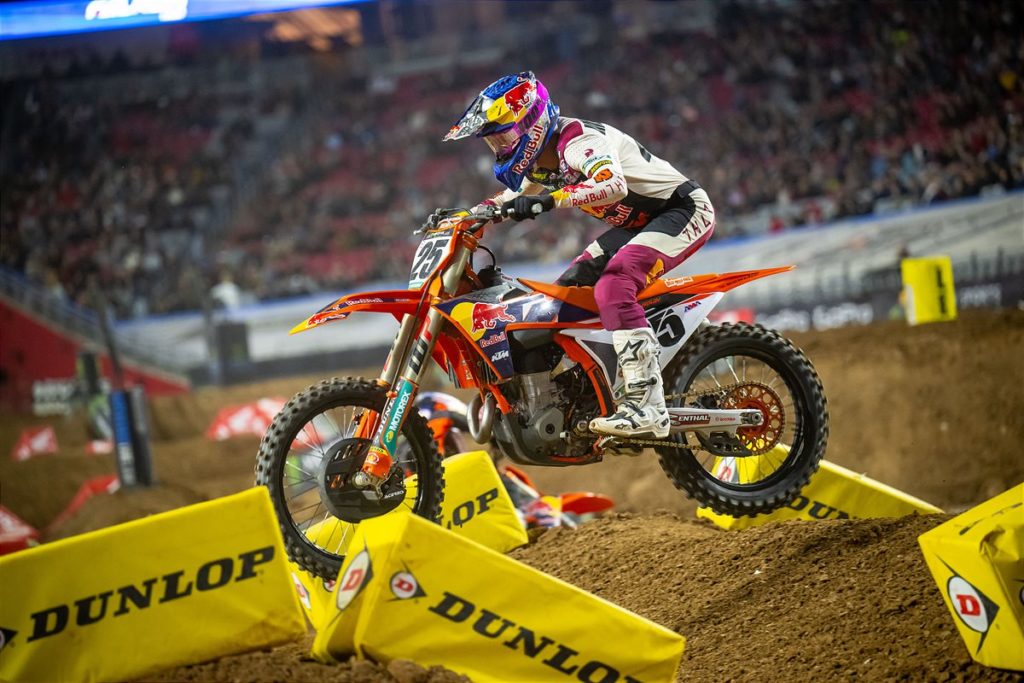 Musquin grabs a pair of top-fives at... 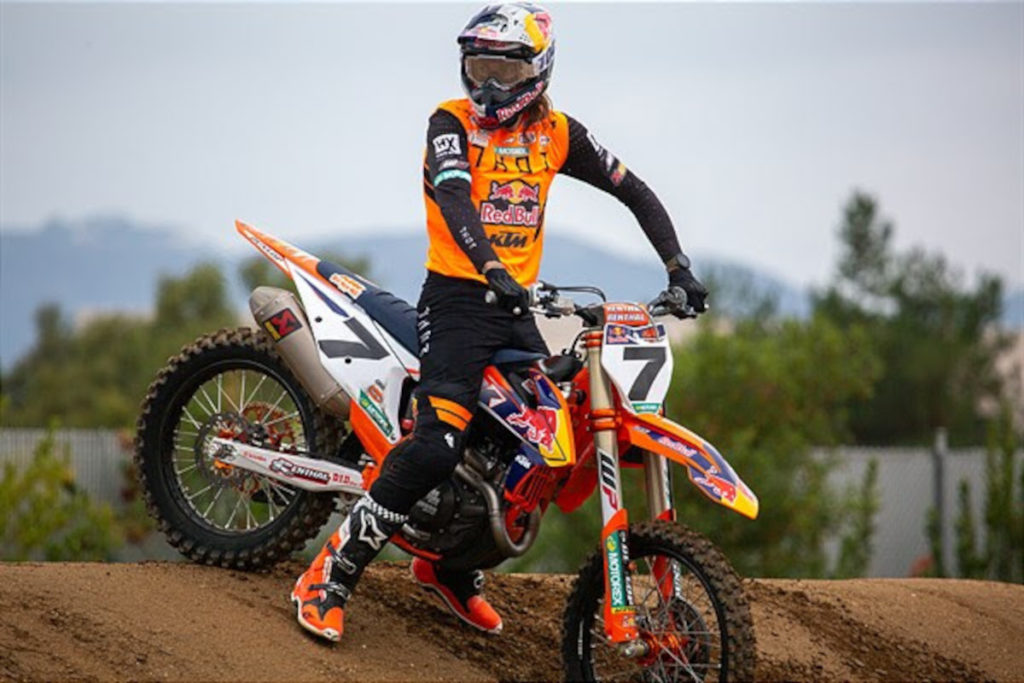