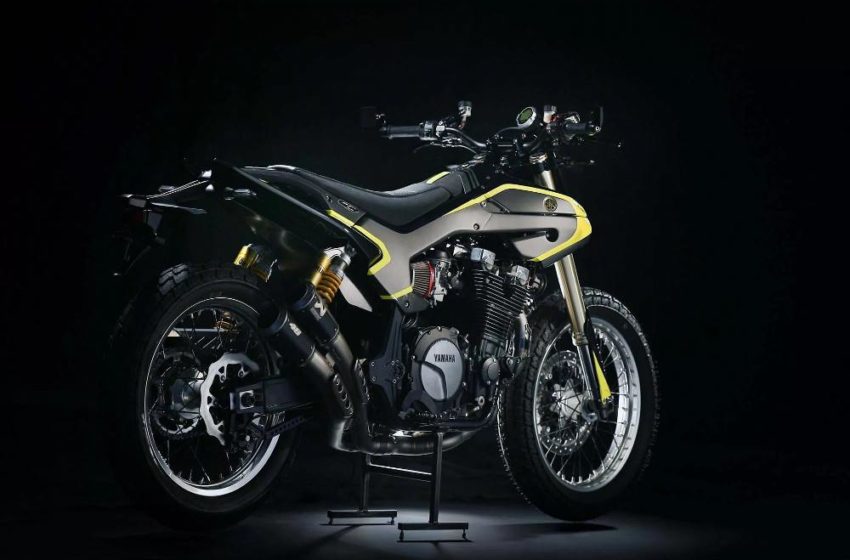 Being Valentino Rossi definitely has its good side and its bad side of things as well. Apart from being the nine-time Motorcycling World Champion, being an elite of sports at the age of 38 and having one of the most powerful and impressive empires (owner of the VR 46 Sky racing team)  also permits you luxuries such your own customized motorcycle.

This is what Yamaha has done through the hands of Rodolfo Fascoli, taking out of his sleeve a motorcycle completely different from the base model, a Yamaha XJR 1300 that has been renamed MYA, a flat tracker unique in the world.

This motorcycle has its creation thanks to the ingenuity of the Italian; Rodolfo Fascoli. It should be noted that he is also the mastermind behind chef-d’oeuvres such as the concept of the Suzuki Katana 3.0. If one were to take a close look at it, we will realise that there are a couple identical features incorporated in it from many other Yamaha motorcycles. Some of such features are the headlights which are quite similar to those in the YZF-R1.

Valentino Rossi, also known as “the Doctor” can absolutely have any bike he wants. But what’s not a sure fact is we do not know if he would have had as much pleasure as the people who were in charge of VR46, his commercial brand; who prepared a really beautiful bike which was show-cased at the last EICMA show in Milan. It is a Yamaha XJR1300 “Mya“, a customization of the spectacular Japanese motorcycle flat-tracker style. Actually, it is not a very common motorcycle any longer given that it is disappearing from the Yamaha catalogue and gradually giving way to the Euro 3.

The great naked classic original style is stripped of virtually all its elements except the chassis and the engine to receive an off-road body set and completely minimalist. The Flat Track style is quite visible as it is materialized in its running seat and the simple front number display.

At the back of a pointed tail is the lid of the tank and it ends in a license plate with the rear light and turn signals. It is clear that the chosen decoration could not be other than a dark combination with yellow fluorine. These colours reveal the outlines and contours of the motorcycle.

The original alloy wheels have been replaced by large 19-inch spoke wheels on both axles with Flat Track tires while the conventional front fork gives way to an inverted one that ends in a single brake disc alongside a Brembo caliper. A pair of Öhlins shock absorbers has been installed behind as well.

For the inline four-cylinder engine, 1251 cc and 98 horsepower, an Akrapovic 4-2-1-2 exhaust line has been chosen as the icing on the cake. It is positioned on the right side in order to improve the admission with air filters for a better flow.

Maybe the XJR1300 may not be the best bike when it comes to lightness, given that it has a weight of 240 kg. That notwithstanding, the result on track is just spectacular. Come to think about it, the XJR1300 will not really be the very first thing that one will think of if you were to start a line of flat track motorcycles as is the case of Yamaha, considering that it has a weight of over 220kg.

The only thing that does not quite grab many people’s attention is the headlights of the R1 placed on the sides of the front fork. Many critcs say it have been better to place them inside so that they would not be like the eyes of the Ice Age sloth.

One has got to admit that putting all of these together make the bike so appealing that for a second, you may forget that you actually have a Yamaha XJR1300 underneath all the neon paint and pretty bodywork. The Mya is actually a blend of new and old technology. If not for it, some technologies would have gradually died out.

Rossi is also known to have tried out Ferrari Formula One in 2006. Though his first day of trial was quite unsuccessful, he started off the second day with an impressive time record which is just about one second behind Michael Schumacher who was rated world’s third best at the time.