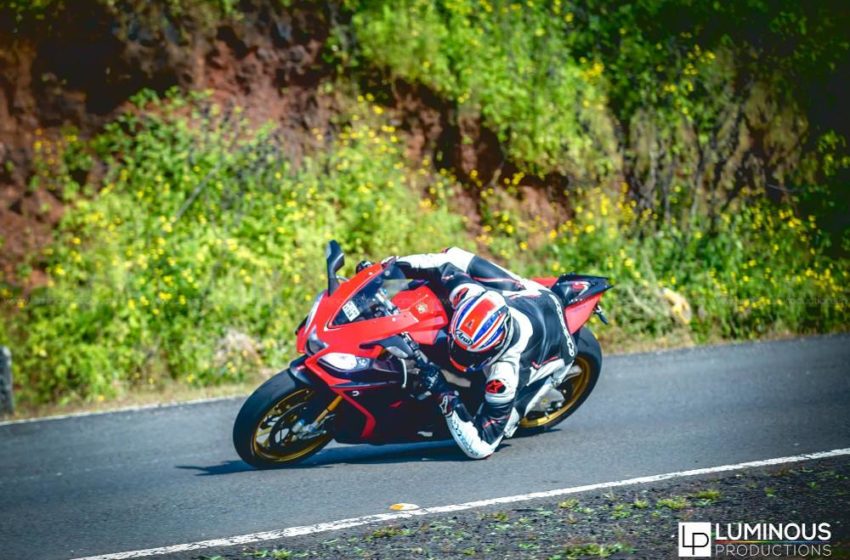 Introduction : Mithilesh is an ex member of Powerdrift and an avid gamer. Just a regular guy who loves riding(cornering junkie ) and loves to know a thing or two about sport bikes as they represent the pinnacle of two wheels. He loves riding his Aprilia RSV4 when he is not busy.

Akash : Which was your first motorcycle?
Mithilesh : It all started with a 4-stroke Yamaha YBX 125.

Akash : Have you put any aftermarket component and how do you feel about it?
Mithilesh : ohh yes many but performance oriented only two. The Akrapovic Slip-on & OEM Aprilia Race ECU. Feeling about the mods: well any one who owns an Aprilia RSV should get the Race ECU irrespective to what ever exhaust he/she choose to install.

Mithilesh with his RSV4

Akash : Showroom from which you got your RSV4 and  how did RSV4 happen?
Mithilesh : Back then Aprilia’s were only sold through ARCO Automotive Pune that is where we got the delivery of my 2013 RSV Factory.Well that would be a long story but coming from a Honda CBR100RR  it was big move as fire blades are knows as the most rider friendly superbike out there and i wanted something which would share the same attributes but with all the modern safety nets like TC, Wheelie control etc… so After a lot of reading educating myself and really knowing what the RSV is, i decided to pick it up and it was clearly a no brainier for me.

Akash : How is the electronic package of RSV4?
Mithilesh : I would rate it perfect not because i own it  but it’s a proven electronics package as it was taken straight from World Super bike Racing where Max Biaggi was spamming and winning WSBK titles one after another. back then a 5-Axis IMU (Inertial Measurement Unit a device which makes cornering more fun and forgiving on a motorcycle which has more then 180bhp at its disposal) these systems back then in 2013 we rare and what made it rarer was the implementation and to make it work in way with engine where the bike should be fast and fun to ride. Aprilia did a fantastic job with its package and named it APRC!! (Aprilia Performance Ride Control) it is truly remarkable what this package was and it’s doing right  now!! this is all just ludacris!.

Akash : How does RSV4 behave on track and in normal traffic? (If you are driving it on track please let me know the track name so that I can mention it.
Mithilesh : RSV4 Factory behaves just the right way as one wants to be when he/she decide to go fast on race track or wants to have some fun or even goes to the track to learn cornering. the adjustable chassis, the way torque is delivered, the way Ohlins suspension is….all of that works in perfect harmony to make sure that you go around a track as fast as you think it is possible and being said that after doing couple of track days including attending California Superbike School twice! i can proudly say that the bike has more potential to go fast then myself.
City riding : Well at one point in time this was the only bike i had this meant taking it out for frequently for city rides! even then there were no complains in the traffic despite being a V config engine the amount of heat felt is comparatively quite less but yes it is a 1000cc superbike so one will feel the heat riding it around in bumper-to-bumper traffic. Any big SBK always heats up one has to deal with it! and move ahead.

Akash : How would you rate RSV4 for below parameters on the scale of 1 to 10.1 being lowest and 10 being the highest?
Mithilesh :

Akash : Your Hobbies apart from riding motorcycle?
Mithilesh : Gaming PC gaming.When i can.

On instagram he has his id as gamer.nfs.
Pic and Video Courtesy :  Mithilesh Panchal.
Disclaimer below or a note/warning : Do wear your gear all the time.
Read Yamaha R1M review by expert.