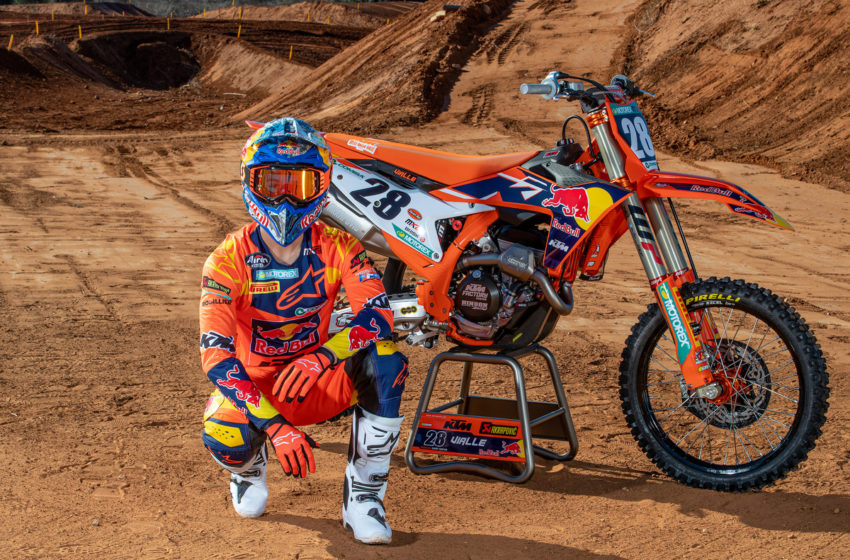 Reigning world champions, Red Bull KTM Factory Racing, will open their MXGP Grand Prix campaign this weekend in the UK and with Tom Vialle expected to push for MX2 title honours in 2022. World Champion Jeffrey Herlings is firmly on the recovery path after left heel surgery.

The British Grand Prix at the expansive. And famous Matterley Basin circuit in southern England will open the FIM MXGP Motocross World Championship for the second time in the last three years. With the first of twenty rounds taking place this weekend. 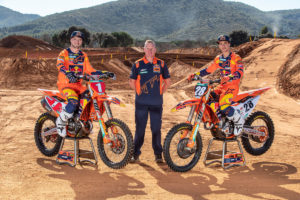 In recent memory, Red Bull KTM Factory Racing travels to the Winchester venue on the back of the shortest off-season. The final round of 2021 took place in Italy on November 10th. Where Jeffrey Herlings clinched the team’s eighth MXGP crown since 2010. And the 2022 campaign launches earlier than ever (the 2017 Grand Prix of Qatar was held on February 25th).

Through this condensed winter period, the team has been busy fine-tuning the latest generation of KTM SX-F race machinery for competition. At the highest level and saw Herlings suffer a fractured left heel, which will keep the mighty Dutchman on the sidelines for the first few Grands Prix.

The onus falls on 21-year-old Tom Vialle for Matterley Basin. The Frenchman won the MX2 title in his second Grand Prix term in 2020. And pushed again for the crown last year despite small hand and foot issues impeding his progress. 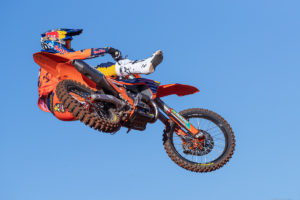 Vialle recovered from the left foot ailment in the hiatus and already returned to podium form.Against his GP rivals with a top-three finish at last week’s Hawkstone Park International in England. Vialle finished 3rd in the 2019 British Grand Prix and 2nd in 2020 (winning a moto) before missing the event in 2021.

Red Bull KTM Factory Racing will count on even more input from former multi-world champion Joel Smets who was appointed Team Manager for 2022. The Belgian has been charting the crew’s work through December and January and in the run-up to the season.

Tom Vialle: “Indeed, we have not had much time this winter, and I needed to recover from my foot [problem], but everything has gone very well. Both with my training and the testing we wanted to do with the new bike. I’m happy, and feel good. Like Matterley. It’s a big and challenging track, and had good results on the two occasions I’ve raced there.

It’s a great circuit to start the championship, and I hope the weather stays stable. This weekend is the start of a long season. Saw in 2021 how things can turn very quickly. And I think everyone saw how competitive and how close the battle for the championship will be.”

Jeffrey Herlings: “I had the stitches out from my heel a few days ago, and now I have to avoid putting any pressure on my foot for around six weeks. Will start physical training again next week with some activities like swimming. Obviously, I’m pretty limited at the moment.But I don’t have any pain. And now we just have to be a bit patient before we can look at it again.Do some rehab and start riding. Best of luck to the Red Bull KTM team this weekend. I wish I were there, but we’ll be back soon.”

Joel Smets Red Bull KTM Factory Racing Team Manager: “It feels like Mantova is not so far away, and the winter has been both hard and positive as we’ve put things into place for 2022.

I think every single person in the team and the organisation will be thinking about Rene [Hofer]. As we enter the GP paddock this week, but, at the same time.We are focused on the new championship and the new target.

Tom is in good shape. And we’re excited to see what he can do back at the front of MX2. As many will say: Matterley is a decent place to open the championship.And we’ll hope for the best and push on from there.”