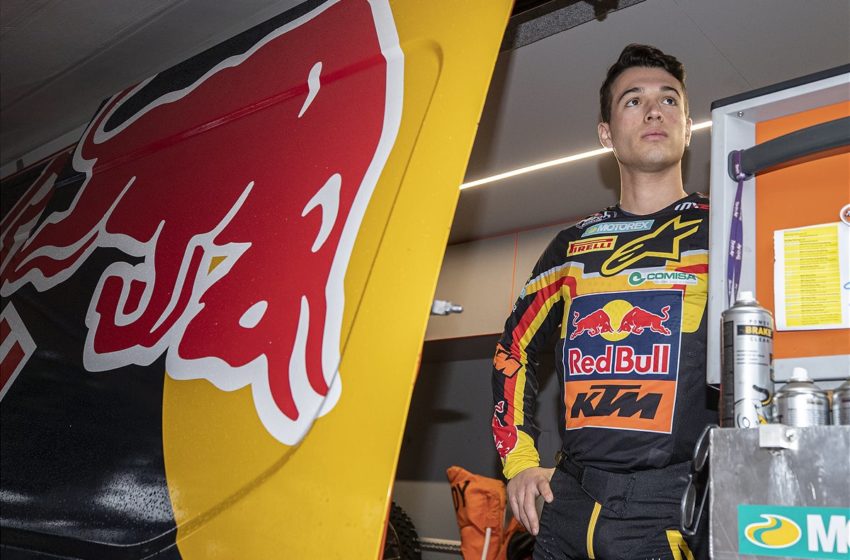 One week after taking a 5th place result at the Lacapelle Marival International on home turf, Frenchman Vialle travelled to the deep, dark and wet sand of Hawkstone Park and was close to the overall win, eventually missing out by just one point.

Vialle, racing at the historic motocross venue for the first time since he won the 2020 International, was less than two-tenths of a second from Pole Position but rode strongly in the two MX2 motos on his new KTM 250 SX-F. He placed 2nd and 3rd; losing a spot on the last lap of the second race cost him the top step of the podium. 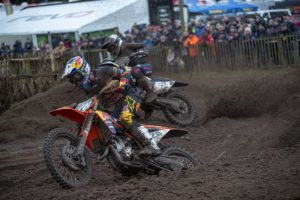 The 2020 world champion then lined up in the Superfinal event – a mix of MXGP and MX2 machinery – and although he was caught in a start collision, he plotted a course back to a decent 8th position. DIGA Procross KTM’s Thomas Kjer Olsen was 3rd overall in the MXGP class with his KTM 450 SX-F. The Dane’s run to 2nd place in the second moto was the highlight of the meeting for the German crew.

Red Bull KTM Factory Racing now look to the British Grand Prix at Matterley Basin and the opening round of the 2022 FIM MXGP Motocross World Championship on February 20th.

Tom Vialle: “Better than Lacapelle, and good to get into the sand for a race. Had two great starts. I struggled with some arm-pump in the first moto and couldn’t ride my speed, but the second moto was much better.I only lost the overall win on the last lap when I was stuck behind a backmarker. Anyway, the result was not critical here. It was important to work on the bike, and we had some difficult riding conditions. And I think we made a big step. It was good training, and next week we will start the season for real.” 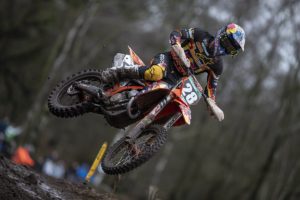 Joel Smets, Red Bull KTM Factory Racing Team Manager: “The pre-season races are really for testing and training purposes, especially now with the new bike and the fine-tuning we need to do. Tom is building up, and I’m delighted with the level we have at the moment. I fell in love with Hawkstone thirty years ago! It is physical technical and offers everything a GP rider needs to prepare. Overall, It’s been a short winter, but we’re ready to go.”