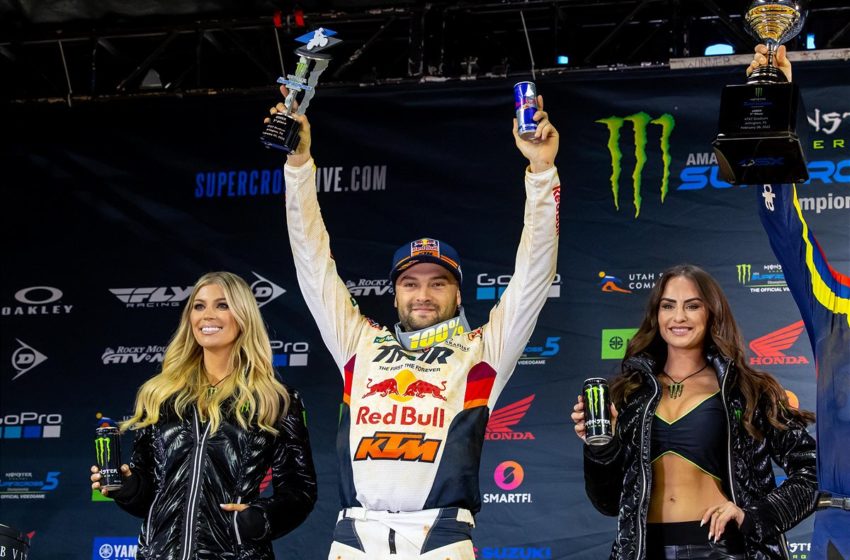 Red Bull KTM Factory Racing’s Cooper Webb picked up his third podium finish of the season with a consistently strong performance at Saturday’s Triple Crown event in Arlington, Texas. Capturing his first Main Event win of the season in race one, Webb delivered a pair of fourths to secure third overall at Round 8 of the AMA Supercross Championship.

With a sixth-place start, Webb put in an early charge to overtake fourth within the first five laps and with the podium runners in sight, he rode patiently and focused. 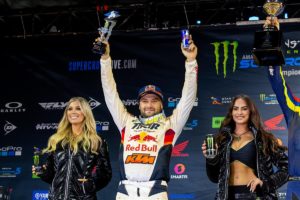 Capitalizing on mistakes by the leaders late in the race, the defending champion set himself up for a head-to-head battle on the final lap, and he made his move just before the checkers to secure his first Main Event win of the season in race one.

Sixth off the line in race two, Webb quickly worked his way into fourth on the opening lap, and he battled just outside podium contention for most of the race. He lost touch with the leaders midway through, but he rallied back to come within striking distance later in the race. With a few valiant attempts for third late in the race, Webb finished a close fourth.

In the third Main Event, Webb found himself tangled up in a first-turn pile up, and he rounded the opening lap back in 12th. Immediately putting his head down to charge into the top-five halfway through, Webb once again came on strong late in the race to overtake fourth with a few laps to go, finishing only 1.157 seconds off the podium in the final race. With 1-4-4 results, Webb could secure a third-place podium at the second Triple Crown. 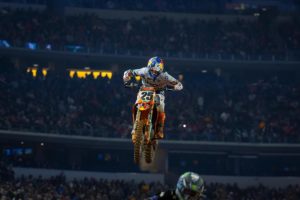 Cooper Webb: “I felt excellent in that last Main Event, I feel like we made some great bike changes for it, and that’s what we live for – to go into the last one tied. We all got bunched up in the first turn and unfortunately ended up going down, but I charged hard, which I’m happy with. Today I was in the fight, and I got my first [Triple Crown Main Event] win, but overall, I’m bummed – I felt like I had it tonight and wanted to go win, so we’ll work hard this week, and we’ll keep fighting.”

Qualifying inside the top-10, Marvin Musquin had a solid start to the night as he powered his KTM 450 SX-F FACTORY EDITION to the holeshot in the first 450SX Main Event. He led the first two laps before a small mistake allowed the second-place rider to get by. From there, the French rider started to lose momentum and focus, causing him to drop back to an 11th-place finish. He again struggled to find a rhythm in the second race, where he finished just outside the top-10.

With hopes of ending the night on a high note, Musquin charged off the line in the final race, but he had an unfortunate crash off the start as he found himself tangled with another rider a few turns into the race. It took Musquin a while to get untangled and off the ground, where he ultimately decided to call it a day after enduring a burn on his back. 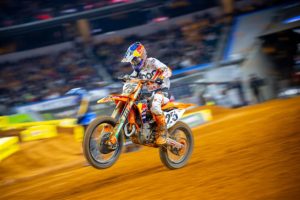 Marvin Musquin: “It was a crazy day, and unfortunately, I just didn’t perform today, even though I was leading the first Main Event and doing great until I stalled the bike and lost momentum. I just need to be better. It was a tough day physically, and the feeling with the bike was just not good, so it’s especially tough when it’s a Triple Crown with three races. In the last race, I ended up going down off the start with someone else and got burned on the back a little bit, and from there, I did it”

Red Bull KTM Factory Racing’s Max Vohland missed Round 8 due to injuries sustained at the last round. Vohland gave an update via his personal social media account last week, stating, “The good news is that nothing is broken. The MRI showed a massive hematoma to the right shoulder and a couple of small cracks in my clavicle. I’m at therapy working, and I will be back racing ASAP.”