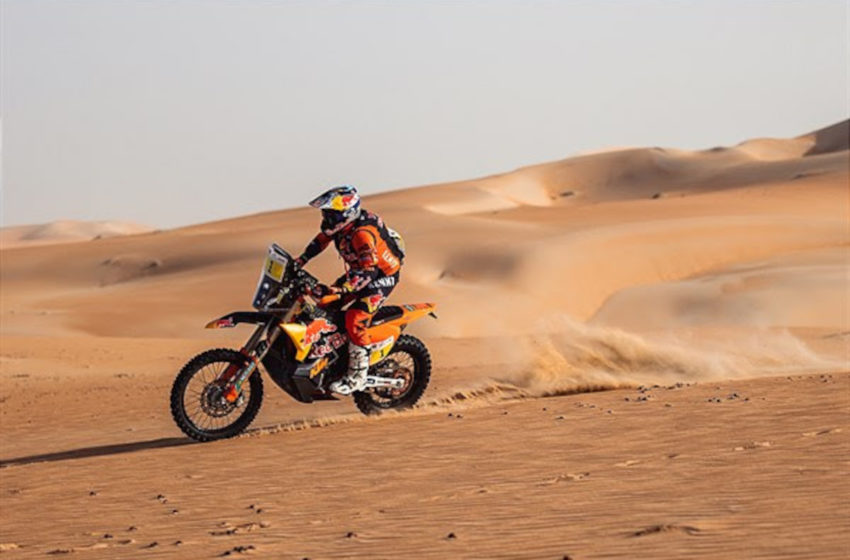 Kevin Benavides endured a tough day in the desert, stopping to assist an injured rider before continuing.

After the time lost was returned to him, the Argentinian placed third and subsequently moved to the top of the provisional overall rankings. Toby Price and Matthias Walkner finished the 10th and 12th, respectively.

Stage two of the Abu Dhabi Desert Challenge covered 453 kilometres and made up the first leg of the event’s marathon stage.

A 316-kilometre timed special raced against the clock tested the riders with another mix of dunes and faster, sandy tracks.

Arriving back at the bivouac at Hameem, riders had to carry out any required maintenance themselves, with no outside assistance permitted.

Kevin Benavides was one of the first riders to enter Today’s special following his third-place result on the rally’s opening stage. Chasing down the riders ahead, Kevin came across a fallen competitor who needed medical assistance.

After waiting for the helicopter to arrive, the 2021 Dakar Champion continued with the stage, pushing hard to make up time.

Arriving at the finish, Benavides was awarded the time lost due to the incident, which ultimately placed him third for the stage and moved the KTM 450 RALLY rider into the provisional rally lead.

Kevin Benavides: “Today was a sound stage for me, and I’m happy with the final result. It was a challenging stage both physically and mentally because, at about kilometre 50, I stopped to help Mike Docherty after crashing.

Ccalled the helicopter and waited for over 20 minutes before setting off again. It’s always tough to regain your focus after something like that, but I could keep up a good pace and complete the stage safely. It feels good to be leading the race, so I’ll try and keep this momentum going tomorrow.”

Stage two was a mixed day for Toby Price. Showing good speed in the first half of the special, the Australian moved up into the top five on time.

Several crashes in the last kilometres of the stage slowed his progress and resulted in a burned arm after falling under the bike. Nevertheless, the two-time Dakar winner is in good spirits and keen to continue pushing for the next three racing days.

Toby Price: “Day two is done now, and it went ok. I was making good progress up to around kilometre 140, where I had a bit of a crash. The bike landed on top of me and burned the inside of my arm, which isn’t great, but other than that, it was a pretty solid day. It’s a tough rally – the heat doesn’t help – but I’m pleased with how things are going, and I’m ready for day three.”

After catching and passing the one rider who set off ahead of him this morning, Matthias Walkner soon found himself opening Today’s long, gruelling 316-kilometre special.

Focusing on the demanding terrain and navigation, Walkner completed the stage just over 12 minutes behind the eventual stage winner. The result places the reigning world champion in 10th overall, but he will enjoy a strong start position for Tuesday’s stage three, where he hopes to make up time on his rivals ahead.

Matthias Walkner: “The second day went well for me, but it was a long and very challenging stage. I caught the leader at around kilometre 15. Opened the rest of the special. I think I did a good job navigating and making my way through the dunes, but it was demanding to be at a maximum focus for close to four and a half hours, especially in the heat. I’m pleased with how things are going, no problems so far, so we’ll see what happens tomorrow.”

Stage three of the 2022 Abu Dhabi Desert Challenge – the second leg of the event’s marathon stage – will see riders complete a total distance of 290 kilometres in a looped route from the bivouac at Hameem. They will race the 255 kilometers against the clock.