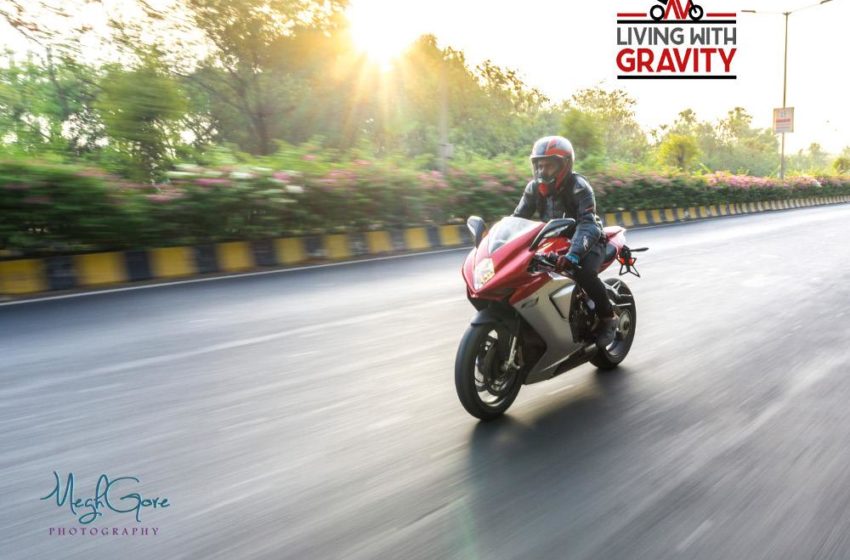 The MV Agusta F3 is just one of those bikes that words would lack to describe it. Some will compare it to the lovely lady of your dreams who’s got every tiny bit of detail, perfect. Others will compare it to the mouth watery food that once you set eyes on it, your salivary glands rest only when you must have taken it down. In a nutshell, the MV Agusta F3 is just the perfect, gorgeous bike that everyone will like to have.

Why we don’t see enough motorcycle champions in India?

Just like the lady of your dreams, the MV Agusta F3 has a tiny waist, and the many in which its tank is esthetically carved to fit in the slim sitting area, then bulges out a little to the tail area, can make just everyone go down straight to his or her dreams as you look at the bike. It is definitely evocative.

The manner in which the MV Agusta F3 responds to the rider’s touch as well is just so amazing. It responds with care and poise giving the most charming and the most mind blowing hands on experience a rider will ever have. When the MV Agusta F3 finds itself at low revs, the sound may not be the best to hear but as the it gets to pass the 8,000rpm milestone, any rider will not be able to believe their ears again; at this moment, the awful sound is gone and what you get as sound can be compared to the Pavarotti-like high C notes, but the MV Agusta F3’s notes are more soothing to the ear.

How does it ride?

Its manner of riding is just perfect. It turns every boring aspect of using a bike into an experience that riders will like to have. The ride is ready to adapt and quite responsive in every situation. You will not for any second feel any harshness with the ride nor its hard edge as you ride. This bike was tested on roads that were quite uneven and had holes in it but the result in terms of riding comfort were still astonishing. You did have to worry about anything. Not even the front line tram-lining.

Structurally, its three-cylinder motor that comes from its ancestor has relatively the same bore but its stroke happens to be longer. It is worth noting that is cubic capacity is no longer 675cc as it was in the older version but has rather gone up to 798cc and this is a guarantee for a lot much more torque. Talking about torque, the MV Agusta F3 has a record 88Nm torque resulting from a rotation measured at 10,600rpm. Even though the MV Agusta F3 comes with a redline that is lower than the 675, its motor can still manage to supply an output power of 148hp.  All these figures when you are riding into the street won’t mean anything as compared to the throttle response from this bike when riding in an urban environment. Despite the fact that old-like digital cluster shows the engine map which has been set to “sport”, its throttle response is still linear and predictable. You will actually be shocked at the number of bikes that don’t succeed in getting this aspect of ridding right, despite the fact that they are electronics-packed. The MV Agusta F3 is a clear example of ride-by-wire technology that was done perfectly.

Exhaust note after the 7000rpm mark

On the highway, it is a whole other story. When riding you will definitely notice as the rev counter keeps climbing but when it gets to pass the 7,000rpm sincerely the sound from the exhaust just becomes crazily amazing. What was a rasp now becoming a roar as you have the Agusta F3 going ahead with the front end skipping as the bike tears into the air but thanks to the MVICS traction control, there is a guarantee that the ride will be a good one as this control system checks the vehicle?

With the Agusta F3 800, there are 4 riding modes that are available for the rider. These modes are Rain, Normal, Sport and Custom. As of what concerns the traction control, it can be switched between eight different steps. Talking of 8, when the bike has the traction control, it feels like a cheetah running after a prey so it is always advisable to have the TC set at a much lower value for safety reasons and get the best out of riding such an amazing. Getting to navigate the menu with the buttons located at the handlebars may be little bit confusing at the start but when you get to set the ride mode, the rest of it becomes a cup of tea; you even get to feel manageable wheelies when you give it the juice.

When in slow traffic, the F3 steers through it with lightness, so much so much that it can’t be compared to any other bike. Its seating ergonomics may not be the most comfortable especially as it has its low clip-ons, and high and rear set foot pegs. Truth be told, if you have even if it is the moderately packed muscles, you won’t feel anything neither on your wrists nor on your back. Personally, I could manage short jaunts and literally felt nothing especially considering that I have dough instead of muscle.

Then when it is time for twisties, you cannot resist falling of the Agusta F3.  At this moment, the MV Agusta feels very light and extremely playful. The ease with which it turns into corners is quite amazing making it easily compared to light bikes such as the KTM RC390. The tires present on this bike are the Super Corsa tires and they offer so much of a grip that at a corner, you may want to keep leaning in non-stop. There are some of those bikes that immediately you mount them, you feel you are a concerning guru. The MV Agusta F3 is one of those bikes and sincerely, there are not many of those bikes out in the market.

In terms of accessibility, the MV Agusta’s handling is quite accessible, and the performance is just awesome. It offers a certain urge of security that isn’t that much offered by every other bike.

Same as every other Agusta, the F3 is well known for its acceleration and along with this acceleration come very good brakes.  These brakes just come to complement the riding experience of an Agusta F3.

One of the issues recorded so far with the Agusta F3 is the clunky gearbox it comes with. The clutch gives quite a heavy pull which sincerely isn’t the best of experiences. When you have the quick shifters on, you may not feel the gearshifts that much but that doesn’t cancel out the effect either way.

Other things about the F3 that you should know?

Some other aspects of the F3 that made it quite uncomfortable were the noise and vibrations that it would come from the bike at low rpm. When the bike is below the 6,000rpm, even the sound wouldn’t be the best. It would sound like a box full of nails. As for the disturbance that this sound can cause, generally is just sucks being e=overtaken on the highway by a bike emitting this sound.

Not having spoken about the electronics so far on this bike, I believe it is high they are spoken about and yes, the MV Agusta has quit a bunch of them. Though the horsepower may remain same for all the modes, the throttle response curve on the other hand changes. In the rain mode, the braking system is the most relaxed and in the sport mode it is the most aggressive. The normal mode is practically good for every other circumstance. With the custom mode, you can actually use your own settings especially if you don’t enjoy the settings of the previous mode.

Talking of individual settings, the F3’s suspension setup comes with a load of adjustments too. The 43 mm Marzocchi upside down front forks can be adjusted for pre-load and compression and rebound damping. Ditto for the rear Sachs monoshock. We, however, left the suspension in company-supplied settings, which we found to work superbly.

Where does it fit in?

From the point of view of the mid-weight motorcycle user, only the Ducati Panigale 959 and the Daytona 675R can measure up to the MV Agusta F3 800. Then from an esthetic point of view, the triumph is not elegant, pretty or desirable as compared to the MV Agusta F 800 so may as well be dropped off the competition. So the only bike that can actually go heads-on to compare with the MV is the Ducati Panigale 959.