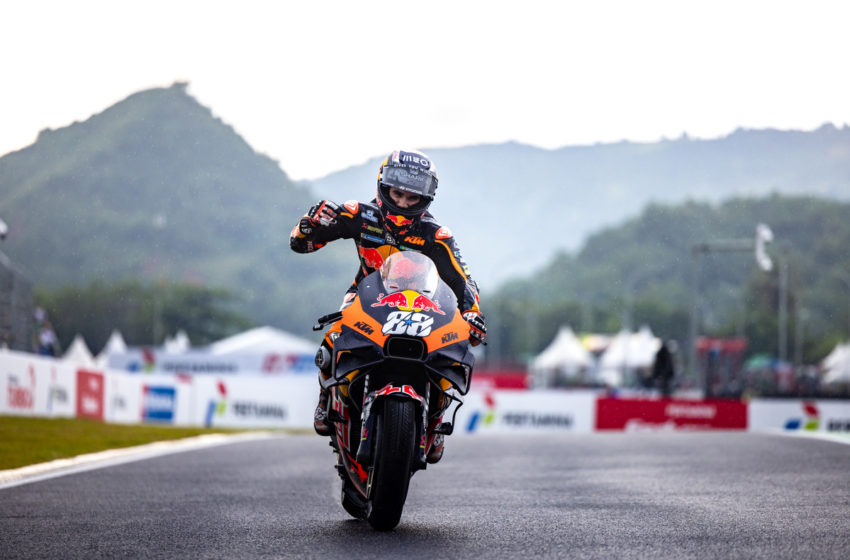 The Pertamina Grand Prix of Indonesia at the new Mandalika circuit was wet and steamy but entirely memorable for a dominant performance by Red Bull KTM Factory Racing’s Miguel Oliveira, who sailed to his first victory of the season and the fourth MotoGP win of his career.

MotoGP rounded the flat, fast, hot and soaking-wet Pertamina Mandalika Circuit for 20-laps and the first Grand Prix on Indonesian soil in a quarter of a century.

The teams and riders familiarized themselves with the brand-new facility during a brief pre-season test but had to cope with harsh temperatures and low-grip asphalt that was unpredictable in terms of the size and cleanliness of the top racing line.

The MotoGP sprint was delayed by over an hour after a torrential rain shower flooded the venue.

KTM started from the second and third grid rows thanks to Binder and Oliveira’s efforts through a positive Q2 on Saturday. Oliveira rocketed from 7th to the lead and diced with Jack Miller as the pair edged slightly over the rest of the pack.

Sections varied in dryness as the heat helped to clear some of the course, and riders could not drop their guard. Oliveira embraced the challenge and forged a five-second lead by the mid-race stage, which he managed to the checkered flag.

Launching from 4th, Binder suffered a technical problem before establishing his race pace and then ploughed a course through the water to win a thrilling battle for 8th.

Binder is now just two points from the top of the MotoGP Championship table, and Oliveira has lifted to 4th. KTM are the top manufacturer in the series for the first time in their six-year tenure in the category, while Red Bull KTM Factory Racing top the Team’s standings.

MotoGP now jets from one corner of the globe to another. Round three will occur at Termas de Rio Hondo for the first visit to Argentina in three years. The grid will form up once more on Sunday, April 3rd.

Miguel Oliveira: “Emotionally, that was a roller coaster. The start was perfect, and it was hard to judge the limit. I followed Jack for a few laps and understood I could go faster. I then focused on doing the maximum and built the gap.

Managed the cushion through the race, but it was not easy. It’s hasn’t been the easiest time for me, so this is emotional, and I promised my daughter a trophy from Indonesia, so this is for her. Let’s go to Argentina now and see what we can do and keep up the level. And I’m happy to be on top of the podium.” 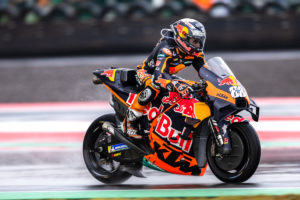 Brad Binder: “I’m disappointed because I had a good feeling all weekend, especially with rain tires. Despite the rain, the grip from the track was insane in some places. Unfortunately, I did the whole race with the ride height device down, and to finish 8th is like a win.

If it had been a dry race, I don’t think I would have been able to do anything. So, we got unlucky and lucky with the circumstances. It was not easy to bring the bike home, so I’m happy. Argentina is a track I enjoy. It will be my first time there on the MotoGP track so let’s see.” 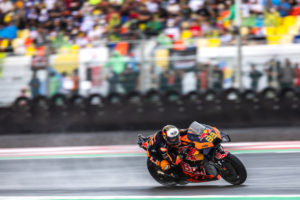 Raul Fernandez: “The big challenge for me today was that the only reference in the wet that I have is from Moto2! The front tire is much more sensitive on a MotoGP bike and more difficult to control, which leaves a huge difference between the two categories. Lap after lap, I started to understand everything better, felt better on the bike, and did a good job. We have a bike that won today under the rain with Miguel Oliveira, so it is a perfect bike, and I feel very positive about this. Results will come with time to continue the good work.”

Remy Gardner: “It was the first time riding a MotoGP bike in the rain, so it is never ideal going into a race when you have never tried the wet before. If I am honest, I expected more of the race today. I had some visibility issues with the rain, and it did not improve much as I was behind the others, but at least I took much experience and managed to do the twenty laps. Learned a lot about the tires as they are very different from the Moto2 ones. The last few laps, I found myself on my own, so I had less water coming into my visor and was able to start improving my sectors and my times. I try to keep positive and move on to the next race.” 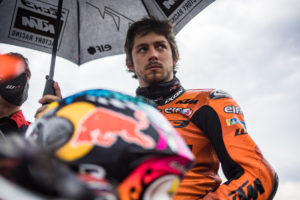 Francesco Guidotti, Red Bull KTM Team Manager: “I’m thrilled and a result for the Team and the company. Everybody who has worked in this project deserves this win. Miguel was so strong since Friday morning and committed to any condition or circumstance. Two races and two podiums and a victory: we are in a good way. What a great start to 2022.”