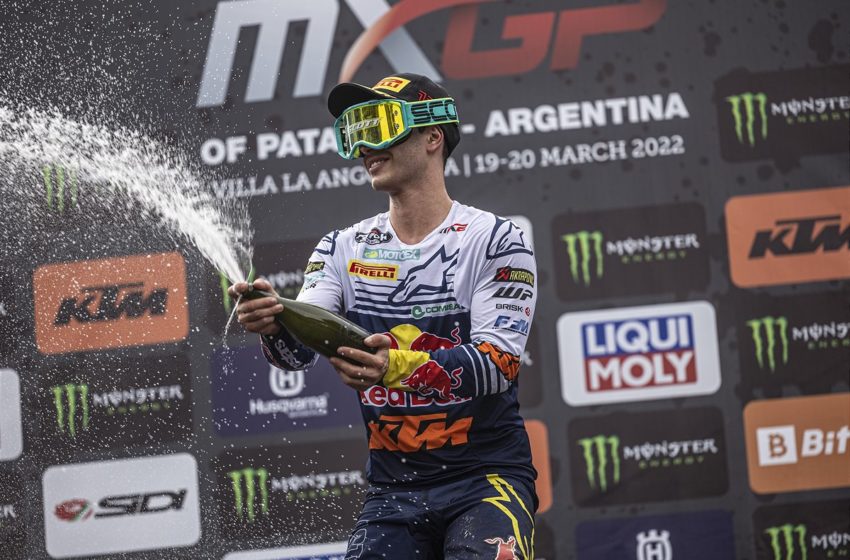 Not counting the 2021 Grand Prix of Russia, MXGP headed outside of Europe for the first time since the final date of 2019 in China and rediscovered the beauty – and technical challenges – of the Neuquen circuit, the Patagonia-Argentina round. The FIM series last visited this epic zone of the country in ’19, and a decent attendance at the facility close to the border with Chile welcomed back the best riders in MXGP and MX2.

Thanks to the shifting volcanic earth that created a fast but rough and rippled racing surface, Neuquen offered its usual tough physical and technical test. Vialle, using the power of his new KTM 250 SX-F, rode to 2nd position in Saturday’s Qualification Heat and was set for a strong outing on Sunday. 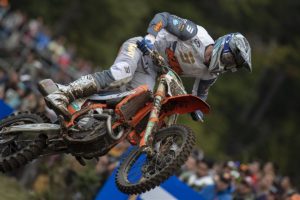 #28 blasted to the holeshot in the first moto and couldn’t respond to the speed set by title rival Jago Geerts. He finished 2nd but set his sights on the second moto.

Another holeshot provided an early lead, but the race was red-flagged after one lap. On the restart, Vialle pushed his way from 3rd to 1st, leaving Geerts in his wake to earn the overall triumph.

KTM was still missing factory representation in the MXGP category due to Jeffrey Herlings’ continued recovery from a broken heel, but DIGA Procross KTM’s Thomas Kjer Olsen was able to steer his KTM 450 SX-F to 15th overall. The Dane was 5th in the first race but didn’t finish the second.

MXGP makes the long trip back to Europe for the Grand Prix of Portugal at Agueda on April 3rd. 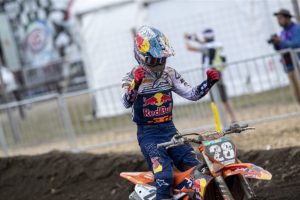 Tom Vialle, 2nd and 1st for 1st overall in MX2: “A nice weekend and I wanted to win that second moto, but it was swift and tough out there. I wanted to make the passes quickly, and it worked out that I had to stay focused. I’m getting back to speed, and physically I’m strong after a difficult winter of preparation. The season is getting going for me now. We have another 17 GPs ahead. I want to thank the whole team for the job at this GP. We have an amazing race bike.”