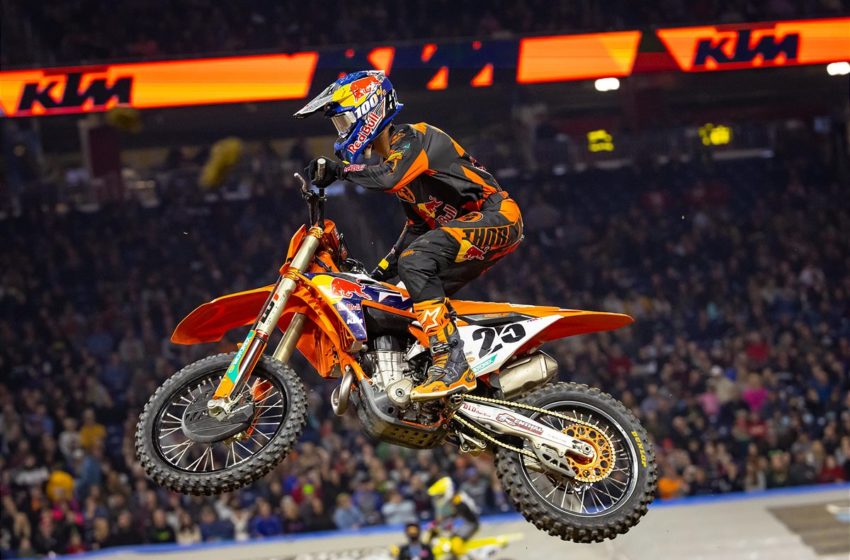 It was a challenging night of racing in Detroit for Round 10 of the AMA Supercross Championship, but Red Bull KTM Factory Racing’s Marvin Musquin minimized the mistakes to come away unscathed and just outside the 450SX podium in fourth overall.

Unfortunately, his teammate, Cooper Webb, was one of a few top riders who suffered race-ending crashes while battling upfront during the Main Event.

Musquin, the sixth-place qualifier, grabbed a top-three start in 450SX Heat 1, and he established himself in the lead battle early on. 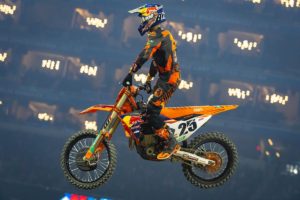 The Frenchmen secured a third-place finish in the heat by putting in 10 consistent laps aboard his KTM 450 SX-F FACTORY EDITION.

Musquin had a significant jump off the line in the Main Event and charged his way into a fierce battle up front on the opening lap.

He diced back-and-forth inside podium contention for the first few laps before getting shuffled outside the top-five midway through the race.

While making a charge for third, Musquin surrendered to the slick conditions late in the race and washed his front-end in a corner.

Despite losing significant time on the podium charge, he maintained his fourth-place position through the checkers. 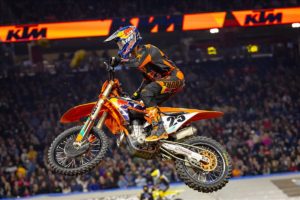 Marvin Musquin: “It was a crazy night of racing. I got a good start in the main and ended up second with Bogle in front of me. I should have passed him, but I wasn’t good in the whoops, and I lost a couple of spots. I was taking the inside on the split-lane, and the outside was better, so people just got by me, and I dropped.

After that, I started getting into a better rhythm, and many guys went down. I was trying to pass Barcia towards the end, and I lost the front-end, and that could have been a podium for me, but I’m just glad I finished healthy and going home.”

In 450SX Heat 2, Webb grabbed a top-three start aboard his KTM 450 SX-F FACTORY EDITION and charged his way into second early on. Engaging in a three-way battle for the early lead, he diced back-and-forth for a few laps before settling into third, and he went on to secure a top-three transfer spot.

In the Main Event, Webb got off to a great start and asserted himself into the podium battle right away. Passing his teammate Musquin for third on lap four, the defending champ continued to mix it up with an enthusiastic group of top riders up front.

While running fourth later in the race, Webb made a mistake through the rhythm section and got clipped mid-air by another rider, resulting in both riders crashing to the ground. Webb re-mounted and attempted a couple of laps before pulling off to receive on-site medical attention.

The Red Bull KTM Factory Racing Team provided an update as of Saturday evening: “It’s fair to say that Cooper was pretty banged up when landed him on. Upon initial observation by the doctor here at the track of his shoulder and hand, it doesn’t appear that anything is broken, but he plans to have further evaluation and X-Rays when he returns home to Florida on Monday.”