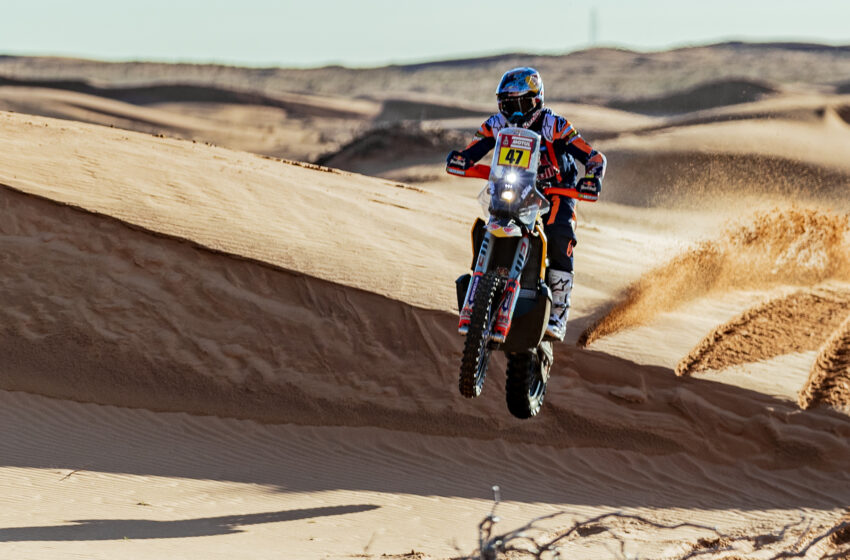 Red Bull KTM Factory Racing’s Toby Price, Matthias Walkner, and Kevin Benavides have completed the ultra-demanding stage five at the 2023 Dakar Rally. The three-man team all placed inside the top 10, with Price finishing provisionally in third place, Walkner in the sixth, and Benavides a further three minutes back in eighth.

The organizers billed it as a tough one, and stage five didn’t disappoint. Totalling 645 kilometres and including a timed special of 373 kilometres, the day saw riders face a stage made up almost entirely of sandy tracks littered with camel grass mixed with energy-sapping dunes.

Setting off fourth and soon finding himself in a group of four opening the stage, Toby Price delivered a strong performance over the first 180 kilometres that saw him lead the class. However, with his group failing to find a waypoint initially, all four lost valuable minutes while they retraced their way.

After the refuelling, and while in that same group, another competitor crashed in front of Toby and went down. Unable to avoid the rider’s stricken machine, Price also crashed but was uninjured. Stopping to assist his rival resulted in several minutes lost – time that was subsequently returned to the Australian on completion of the stage. As such, Toby placed third for the day and lay second overall in the provisional standings. 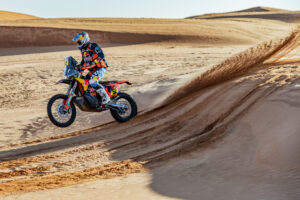 Toby Price: “Tough stage today – we got lost early on and spent some minutes getting back on track. Then, in the second half of the stage, Barreda had a big crash, and I ended up getting tangled up in that. I was okay, but we stopped for around five minutes to make sure Joan was okay. Overall, it’s not been a bad stage, I don’t think we lost too much time. I’ll get my shoulder looked at now because I knocked it in the crash, but apart from that, I’m looking forward to the next day.”

Matthias Walkner was the last Red Bull KTM rider to enter the stage. And while fighting through the pain of his injured wrist, sustained earlier in the race, the Austrian rider once again showed his mettle as he pushed hard through the tough special, making minimal errors.

Inside the top five by the refuelling point, Walkner maintained a solid pace to the finish, where he ultimately posted the sixth-fastest time. Feeling a little more comfortable on the bike, despite his injury, the 2018 Dakar champion was in good spirits at the finish and now looks ahead to the remainder of the race.

Matthias Walkner: “It was another tough day in the desert. Today was when I had to decide if I would continue the race – my wrist and body have suffered since my crash on Monday. Despite that, it’s probably been my best day so far – I was pushing hard for the whole stage and didn’t feel too bad physically. Looking at how much time I lost is frustrating, but I know I gave my all today.”

Also missing the same waypoint as the leading group, Kevin Benavides could not take full advantage of his seventh-place start position and lost several minutes while re-finding the correct route. Giving his all for the remainder of the stage, Benavides placed an impressive eighth, 10 minutes down on the winner. A result strong enough to move him up to third in the provisional overall rally standings.

Kevin Benavides: “Today was a good stage, and I’m happy with how I rode in the sand. Unfortunately, I made a big mistake around kilometre 190, which cost me a lot of time. After refuelling, I tried to push again to make that up, but the terrain was so physically demanding it got to the point where it was tough to hold on. I’m a little frustrated because I know I could have made up more time today, but it seems a lot of the top guys had similar issues, so my position in overall is still good. Time to recharge my batteries now, ready for tomorrow.”

Friday’s stage six, the longest of the event at an eye-watering 877 kilometres, will take riders from Ha’il to Al Duwadimi. A timed special of 467 kilometres will be raced against the clock.