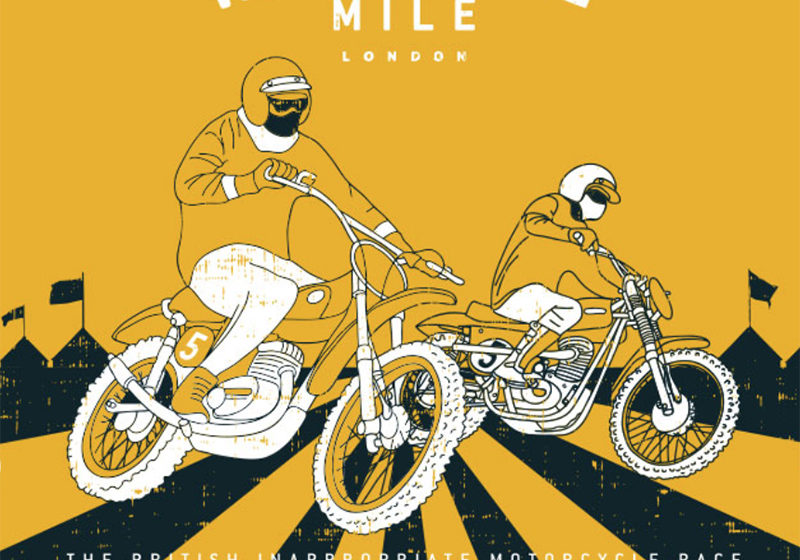 Malle London is a family company that was started in 2012 by two ‘designers/ cousins/motorcycle-disciples’ Robert Nightingale & Jonny Cazzola.

After a decade of working in the design, engineering and innovation space and after many trans-continental motorcycle adventures; they decided to set out to create more robust and British utilitarian Adventure Accessories – to enable motorcyclists and adventurers to go further and in-turn inspiring them to appreciate and travel the world more.

In 2014 Malle hosted ‘The Malle Mile’ in London, an intimate and inappropriate motorcycle race which has doubled in size every year and has been a sold out event for the last 3 years.

“A NON-STOP CELEBRATION OF THE SPEED, MUSIC

AND ART OF THE MOTORCYCLE CULTURE.”

In 2017 they hosted ‘The Great Malle Rally‘, the longest inappropriate motorcycle rally ever attempted in great Britain. Exploring over 1250 miles from the northern tip to the southern tip with 100 custom/classic/cafe motorcycles. In 2019 and beyond expect to see new motorcycle adventures, rallies and celebrations happening in Britain and beyond.

Completed in 1769, the house is the work of Sir Robert Taylor, who was also responsible for Danson House and for the enlargement of the Bank of England. Behrens imported the building materials from around Europe: the red clinker bricks came from Amsterdam, tiles from Heidelberg and marble from Livorno.

The manor of Kevington was in the hands of the related Manning and Onslow families from the late Middle Ages to the mid- 18th century, when Middleton Onslow sold it to Herman Behrens, a City merchant from Amsterdam who commissioned the construction of Kevington Hall.

Behrens’s descendants held the property until the Second World War, when the government requisitioned it to accommodate Canadian troops. Afterwards, Kent county council used the hall as a primary school until the early 1980s.

Now privately owned, Kefington Hall has been diligently restored and is available for conducted group tours – and sometimes for private functions – by arrangement. It’s also usually one of the delights of the Open House London weekend.

The Midnight Mile is an electric sprint race, held under the cover of darkness, part race, part disco – a sonic and visual spectacle at the weekend of Malle London. Malle London introduces an entirely new type of electric motorcycle race at The Malle Mile festival.

The organisation invited many new/concept/hand-built electric motorcycles to join them in a futuristic off-road race like no other; where the race track will pulse and the light and sound will move with the riders … All under the cover of darkness! Happening late on Saturday night July 27th at The Malle Mile.