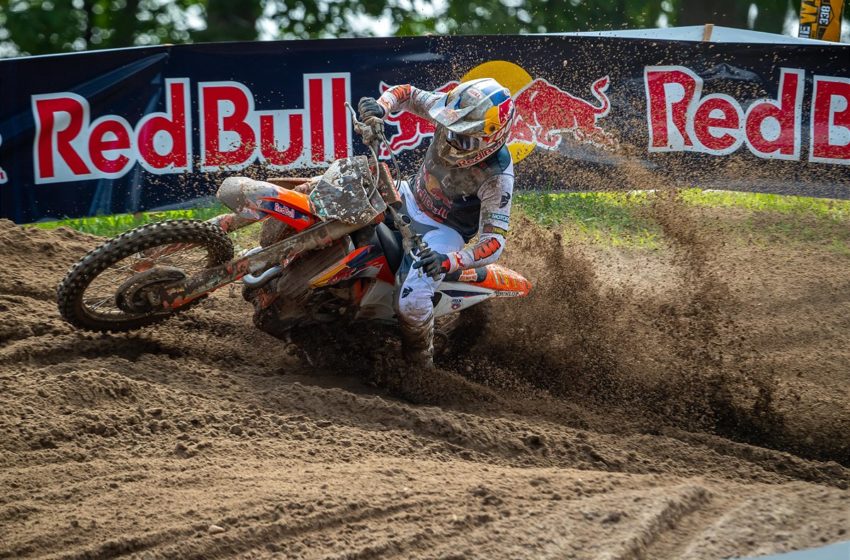 Five rounds into the 2021 AMA Pro Motocross Championship and Red Bull KTM Factory Racing’s Cooper Webb is falling into stride. As he inches closer to a podium finish in the outdoor season.
The Wick 338 National is no slouch on the circuit and the reigning 450SX Champion saw perhaps his best performance of the season in the rough.Sandy terrain as he claimed a top-five overall with 6-5 moto finishes.
Webb, the sixth-place qualifier, had a solid start to the day in the stacked field of 450MX competitors. In Moto 1, he got off to an eighth-place start. And immediately put his head down to charge his way up to sixth by the second lap.
Maintaining a steady pace throughout the 15-lap race, Webb finished sixth. In Moto 2, Webb powered his KTM 450 SX-F FACTORY EDITION to the holeshot.
And battled for the early lead before settling into second on lap one. He mixed it up with the front-runners early on and eventually settled into fifth.
With a late charge, he fought all the way to the checkers finishing fifth in the moto en route to a season-best fifth overall for the day. 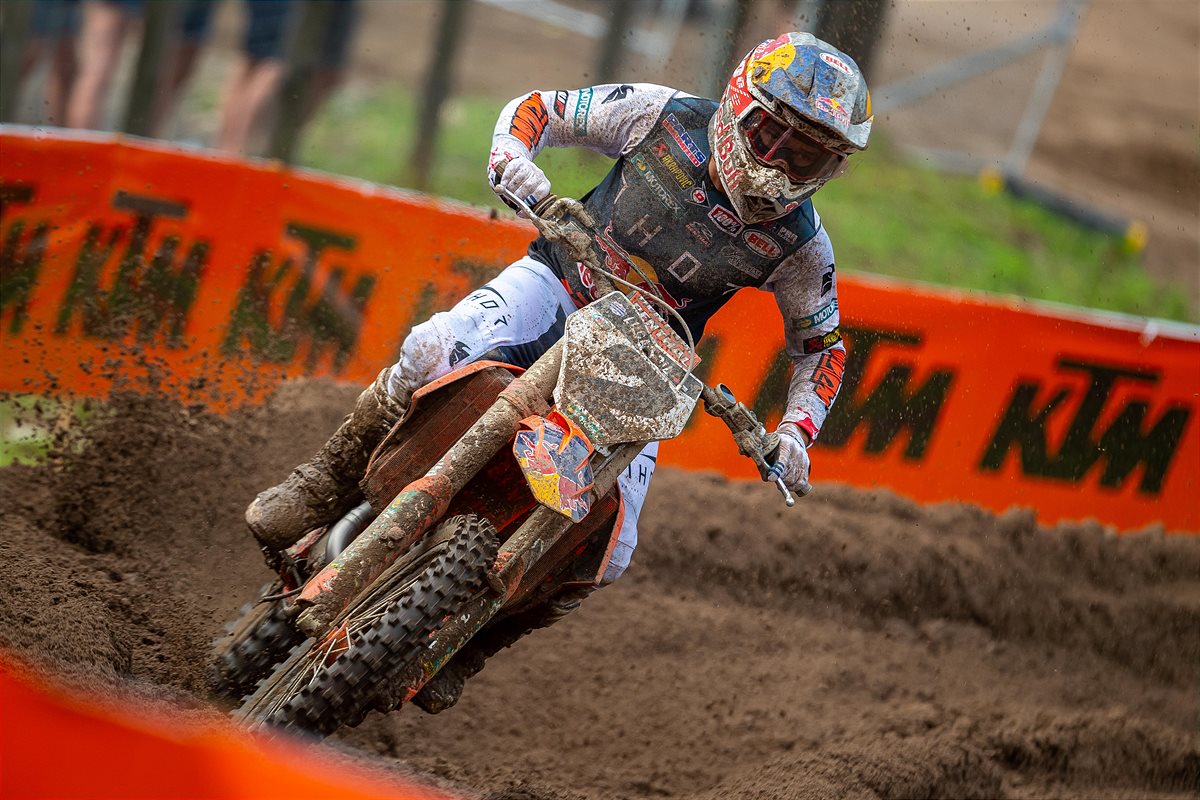 Webb: “I made a lot of progress this week so I came into today pretty happy with things and I felt like my riding was a lot better than it has been. Today was definitely a lot better of a day and I’m happy with the progress in a short amount of time, so hopefully we’ll continue to get better from here.”
Musquin had a great jump aboard his KTM 450 SX-F FACTORY EDITION in Moto 1.Claiming a solid fourth-place position on lap one.
Racing with the lead pack early on, Musquin got shuffled back a few positions to seventh and spent the remaining laps fighting to make up for lost time.
Despite losing his rhythm later in the race, Musquin battled back to finish 10th. In Moto 2, the French rider locked in another great start to put himself into fourth early on. Where he battled intensely around the top-five for the first half of racing.
He dropped a couple positions to ultimately finish seventh in the race and with 10-7 moto scores, Musquin came away with eighth overall for the day. 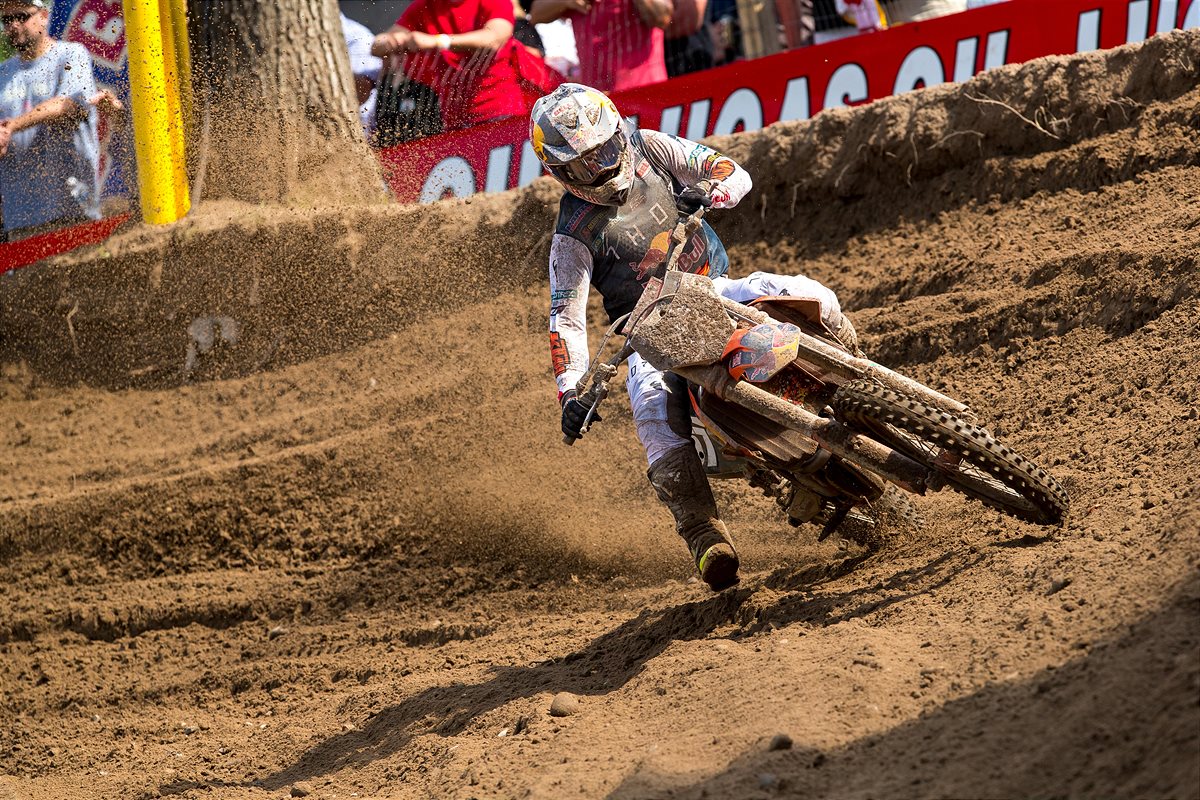 Musquin: “Conditions were really tough today; it was definitely a tougher Southwick. My starts were good, I feel like I always have good starts here in the sand.
And my bike was hooking up really good in both motos.
I had decent speed at the beginning and then I started to get passed by a couple riders and lost rhythm and it was hard to keep up, so that was the biggest issue on the weekend.”
In 250MX racing, rookie Max Vohland got off to a top-10 start in Moto 1.And he quickly charged his KTM 250 SX-F up to seventh by the fourth lap. He battled just inside the top-10 for the entire race, securing a solid 10th.
In Moto 2, Vohland upped the pace right out of the gate to put himself into a favorable sixth-place position on the opening lap. He once again hovered around the top-10, heading into the final laps with a solid eighth-place position.
However, another rider collided with him late in the race causing him to go down with two laps to go.And he lost a handful of spots to ultimately finish 13th in the race and 11th overall for the day.

Vohland: “It was a pretty good weekend. I really liked the track and the sand. In the second moto. I was running eighth and was on target for my best overall finish of the year but with two laps to go.
I had a nice little cushion on the guys behind me and a lapper just came across my line and took me out. It’s a little disappointing but it’s racing, so it happens. I’m looking forward to Millville with pretty similar conditions to this.”
Offroad racer-turned motocrosser, Kailub Russell, grabbed a top-15 start in Moto 1. But chaos ensued on the opening lap after a pair of unrelated crashes ultimately brought him into the mechanic’s area with a broken shifter.
The crew repaired Russell’s broken shifter and he returned to the track in dead last.Where he made an impressive charge from 40th all the way up to a 24th-place finish. In Moto 2.
He got off to a 14th-place start and battled inside the top-15 for most of the race. He got passed late in the race to ultimately finish 16th in the moto and 18th overall on the day. 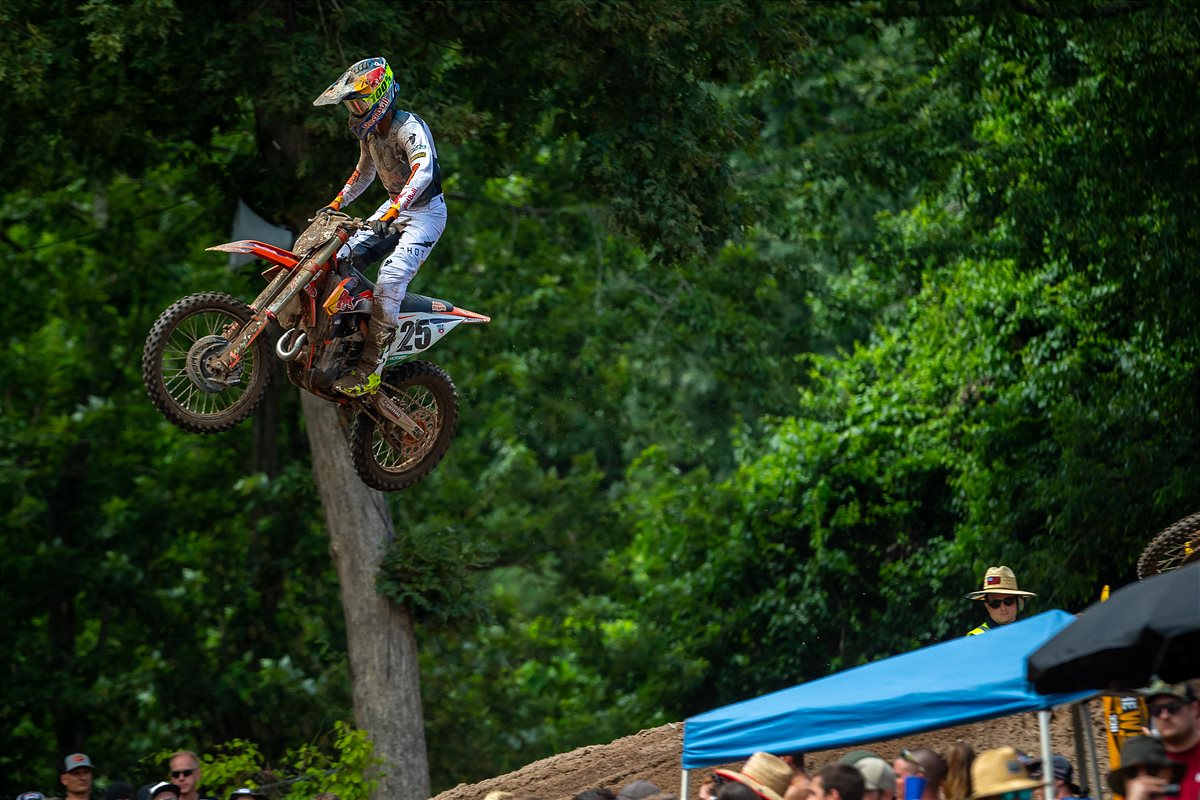 Kailub Russell: “All-in-all, there are a lot of positives to take away. It was a really tough track – it was brutal but I enjoyed it. Those guys are going really fast and they’ve got a lot of experience in their environment.
I just struggled to ride at that next-level pace, I’m not quite ready to run that pace just yet. But getting a little bit more comfortable. The goal is to get inside the top-15 and then try to get in the top-10 spot but all in due time.
All I can do is keep plugging away and hopefully we’ll get there eventually.”
The AMA Pro Motocross Championship returns to racing next Saturday, July 17 for the Spring Creek National in Millville, Minnesota. 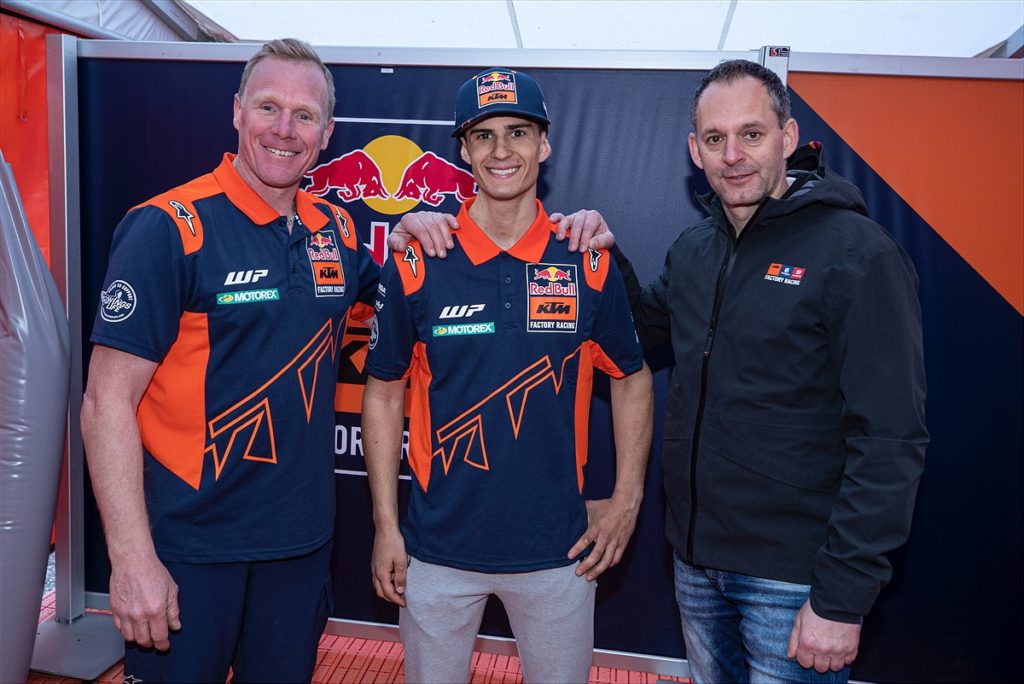