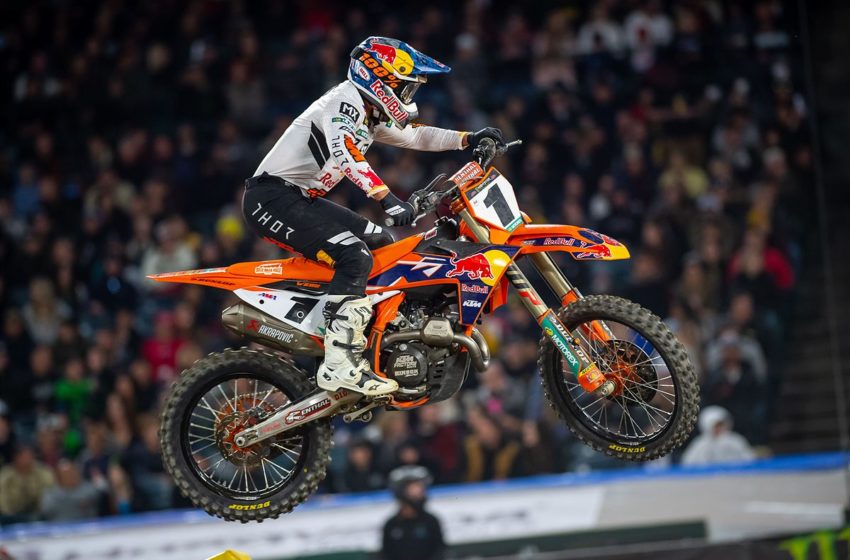 Red Bull KTM Factory Racing’s Marvin Musquin and Cooper Webb managed a challenging night of racing in Anaheim, finishing sixth and eighth-place, respectively, at Round 4 of the AMA Supercross Championship on Saturday.

Teammate Aaron Plessinger suffered a race-ending crash early in the Main Event. And after further evaluation, the heat-race runner-up was fortunate to come away with no serious injuries.

Musquin started the day positively, earning his best qualifying position of the season in third. He kept the momentum rolling into 450SX Heat 2 with a fifth-place start aboard the KTM 450 SX-F FACTORY EDITION. He battled inside the top-five early on, and he lost some momentum during a close race battle, but he was able to regroup and finish strong in fourth.

Musquin had a significant jump off the start in the Main Event as he landed a top-five position early on. He battled back-and-forth through the opening laps before settling into sixth, and he maintained a good pace just outside the top-five for the remainder of the race, securing sixth on the night. 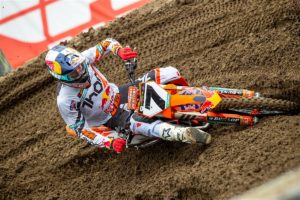 Marvin Musquin: “I wanted to rebound this weekend and not do what I did last weekend. I was in a decent position off the start and made a mistake, missed a rhythm and lost one or two spots, but I ended up the sixth tonight. Had the potential to do a little better, but man, it was difficult for me through the whoops, was losing time there, but the rest of the track, I was doing great. Overall, a little bit more consistent Main Event, a little better fight, and we move forward to the next round.”

Webb, the sixth-place qualifier, had a pretty uneventful heat race after finding himself back in sixth off the start. Racing just outside the top-five, Webb kept a steady pace for all seven laps to secure a sixth-place finish in the heat.

With a 10th-place start in the Main Event, the defending 450SX Champion had his work cut out for him as he set out for an early charge. Webb had made his way up to seventh by the mid-way point, where he battled just behind his teammate, Musquin. While making a charge forward, Webb slid out and lost one position, but he rallied back to salvage an eighth-place finish on the night. 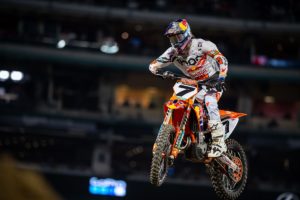 Cooper Webb: “Extremely tough night tonight at A2. Didn’t get a great start, and I was pretty buried in the pack early on. Made some passes, got up to around seventh, and then fell back a few spots. I was able to get back up, make some more passes and ended up eighth. Not a great night at all, but the only thing we can do now is regroup and try to get better for next weekend in Arizona.”

It was a tough break for Plessinger, who had a solid start to the night, capturing a stellar heat-race holeshot aboard his KTM 450 SX-F FACTORY EDITION. He led the first four laps before getting passed by Eli Tomac, and he went on to secure a season-best second-place finish in the heat.

Plessinger didn’t get the best jump off the start in the Main Event, and he found himself outside the top-10 on the opening lap. He went to work right away, making an early charge, but he lost his footing in the sand section and went down hard on his wrist, unfortunately ending his race after only a few laps.

Aaron Plessinger: “Started pretty good. I felt perfect on the bike, had the best qualifying and just felt the most comfortable I have so far. After a solid heat race, I was en route to having a great night, but I didn’t get the greatest jump on the start of the Main, and it kind of all went downhill from there. And I was in the back battling, and then I tried to go for one of the outside passes and ended up smashing a hay bale and landing on the ground. It ended the night for me, but nothing is broken or injured too bad, so we’ll be back and ready to rumble in Phoenix.”