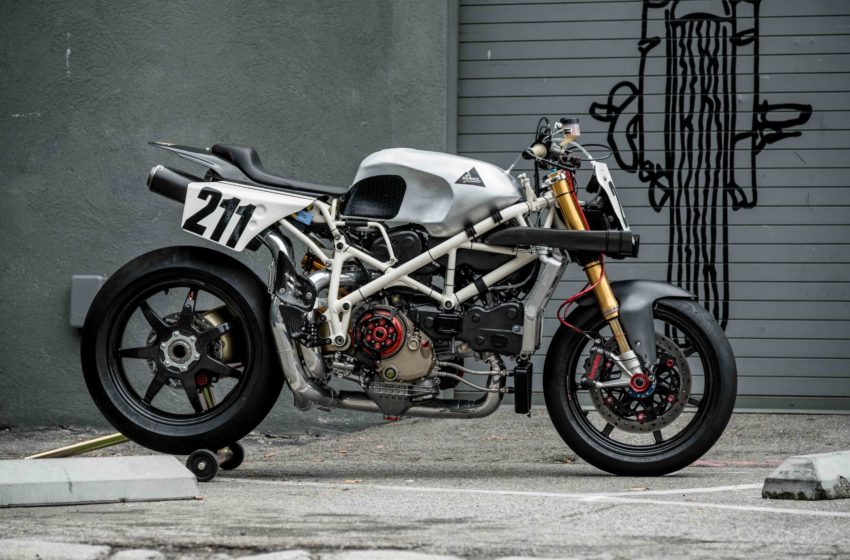 “The Beastie” is the classic example of how a Ducati could be converted into a sort of flat tracker . Ducati Hyper SP is the base for this ” The Beastie “. The good part was that there were hardly few components like front number plate and the seat section, front wheel and electronics those were used.

However the structure was already build last year and the internal component like the motor were put into set of sand cast cases from 1098R used for the Homologation of the World Superbike spec 1098’s in 2007. Added was another compoenent of Nova that is gear box.

For better acceleration first gear is tall as last year’s second gear and the gears are a closer ratio. The Beastie gets its longer swing arm made up of magnesium that is one of the biggest change .

The Hyper SP frame was substituted with Ducati Street Fighter with a welded-on head tube from a 999. The gas tank is thin and holds around 3 gallons of fuel the reference point used for the tank was Mark Marquez’s Honda GP.

Mark Sutton helped tuned the motor as he is regarded as one of the best in the US with the 1098 motors and is making over 180hp at the wheel at 340 lb’s wet. However other point to be taken is there are no rider aided electronics on the custom.

The Beastie will debut at the Pikes Peak International Hill Climb takes place on Sunday, June 30. Over the span of 12.42 miles, racers partake in 156 turns to reach the 14,115-foot summit.

Fork: Öhlins with an international kit