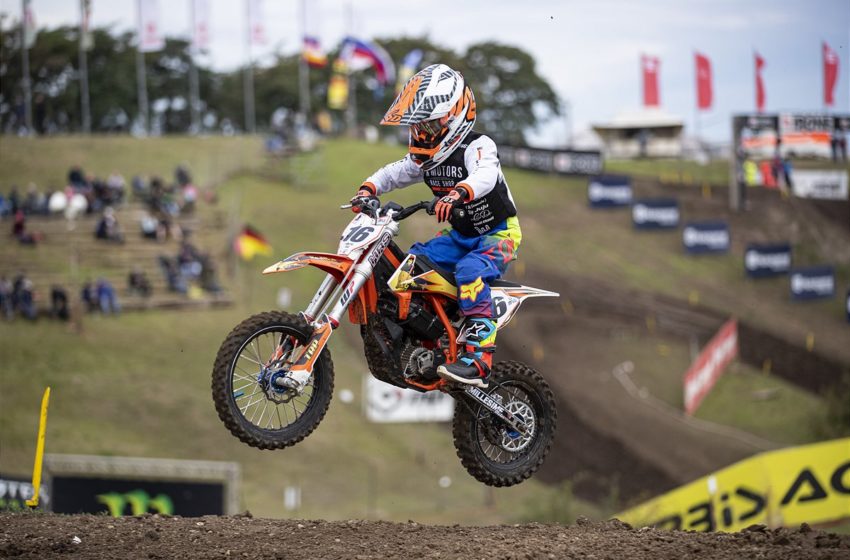 Open to all KTM SX-E 5 riders. The European Junior e-Motocross Series is a five-round series that will once again run alongside selected rounds of the MXGP World Championship.

Adopting the same racing format as MXGP.They will use a timed qualifying session to determine gate pick, seeding riders onto the start line for each race.

After the points are tallied up following the two motos. The top three overall riders will make their way onto the MXGP podium to celebrate their success.

The MXGP of Spain on May 29 plays host to the season-opener, with the remaining four events taking place during the early summer months. Visiting the popular venues of Ernée in France and Teutschenthal in Germany.The series draws to a close with a two-day event in Loket. The MXGP of Czech Republic, on July 16-17.

After attracting a truly international line-up throughout the 2021 campaign, the first running of the series undoubtedly proved to be a massive success. With the 2022 tour shaping up to be even bigger and better. Entries are now open and will sell out fast.With the only requirement to secure a place on the start line being that competitors commit to a minimum of three rounds while also being affiliated to their national federation.

All racers who line up on state-of-the-art KTM SX-E 5 mini-cycles will receive exciting products from the KTM PowerWear range. Designed with the same winning intent as all KTM motocross models.The pit wear, merchandise. And accessories will ensure all young riders enjoy a professional appearance when away from the racetrack.

And for the 2022 European Junior e-Motocross Series champion, an exclusive prize is up for grabs – an all-expenses-paid trip for the series winner and one guest to the FIM Motocross of Nations in the USA. In September! All riders who compete in the complete five-round series will be eligible to join an end-of-season training camp with Red Bull KTM Factory Racing representatives.

For further information on the exciting European Junior e-Motocross Series and to secure a place on the start line, please visit – www.junioremotocross.com.

Watch highlights from the 2021 season here.

Federico Valentini – KTM Head of Global Marketing: “It’s fascinating that the European Junior e-Motocross Series is returning in 2022 following the success of last year. It proved to be hugely popular. And the feedback we have received has been incredibly positive. This year we will see the same racing format, which worked perfectly in 202. And gives all the riders a scarce opportunity to race on the same tracks as their MXGP heroes.

The series shows that KTM is 100% committed to both racing and our e-mobility research. And development, with many of the racers choosing the KTM SX-E 5 as their bike of choice last year. It’s not too long until the first round.And I’m sure the 2022 European Junior e-Motocross Series will be a huge success.”