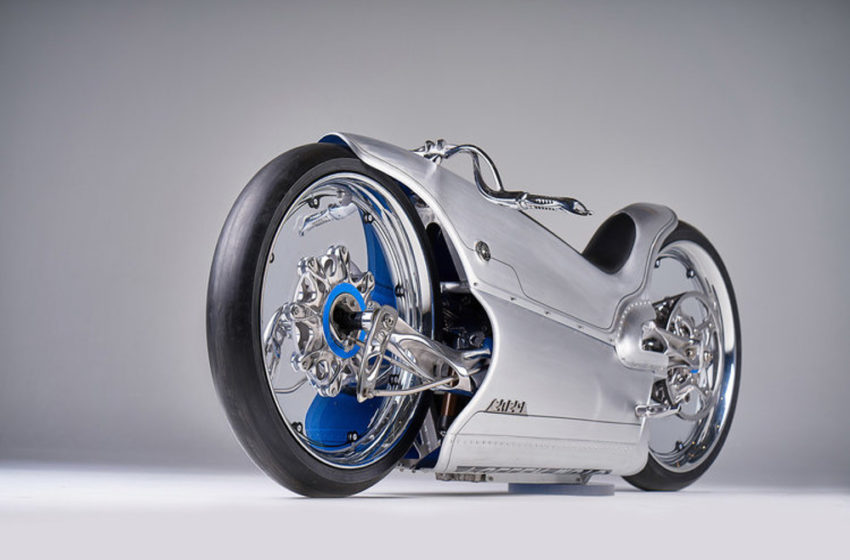 The art of making custom is not new however taking it to next level requires a right set of vision and eccentric mind.The trend of creativity since last decade has started to grow . Artists are no more artists they now interpret the world as per future as per everyone’s vision and there visions are very clear.

Another aspect that is technology playing an important role to help these artists achieve there objectives. Jaw-dropping designs are now not a thing of past but they do exists.Combination of Technology with right vision is helps achieve the right results.

One such example is Bryan Fullers “Majestic 2029” a concept that is as inspiration to young guns who are looking forward to take a leap in this field. This was commission by Haas Moto Museum and Sculpture Gallery with an objective of building a futuristic concept based on French Majestic 1929 .

The French Majestic 1929 was innovation of French designer Georges Roy back in the days when motorcycle was regarded as novelty and very few could buy.He started experimenting in the early twenties to design a motorcycle that does away with the conventional tube frame. Outcome was a motorcycle which at that point was futuristic and was not like a traditional motorcycle.

Bobby Haas, collector and owner of the Haas Moto Museum and Sculpture Gallery says of the new 2029, ” We are not going to create a production motorcycle but it will be pure piece of art ” and the same vision was aligned by Bryan Fuller who took help of technology to bring this motorcycle to a concept stage.

The concept is electric bike with fully integrated components and made to look like a single component with sleek design and compact body compared to the old 1929 Majestic. The new Majestic gets poly-carbonate wheels, titanium components printed with the help of 3d printer and also gets hub centric steering .The advantage of using hub centric steering is it separates the steering, braking, and suspension functions in a different fashion. The donor hub was from Bimota Spirit made called Tesi was founded by Bryan Heidt. Tesi made the right dimensions of bike.

Unlike his past builds Bryan Fuller had different thoughts about 2029 he wanted to create something different, some feat that was not achieved earlier.He not only wanted to make the dynamics of the concept world class but when it came to matter of aesthetics they were different too and that made him to go for using the 3D metal printing.

Lead metal fabricator of Fuller Moto, Byran Heidt supported Bryan Fuller to help achieve the design concepts getting clear with the help pf CAD model. Designs were reviewed by Nich Pugh who is world famous concept artist and his eloquent work could be seen in movies like Star Wars . Nich’s profile consists of working with big names like Universal, Sony, Fox and Disney.

Next step was Nich handing over CADS to 3d printer Oerlikon  that helped parts turning into  metal by using Titanium. Electric powertrain was right choice for this innovative concept therefore Bryan used Zero Motorcycles FXS electric bike as it had same measures compared to original bike but there was one challenge the motor being low and batteries being high it was no match.However Brian turned it upside down so that it adapted the exact design that was supposed to be made.

Inorder to match the body with the original Majestic the aluminum chassis was welded with 1/4″ Steel rod.Panels of thickness 3003 H14 .063 were created. For front and rear fenders 4 inch piece of aluminum was broken.You can see the gills at lower level of front wheel.The gills act as diff-users for the air. For paint scheme the tinted hue was sprayed inside the parts of bike, as well on Gills.