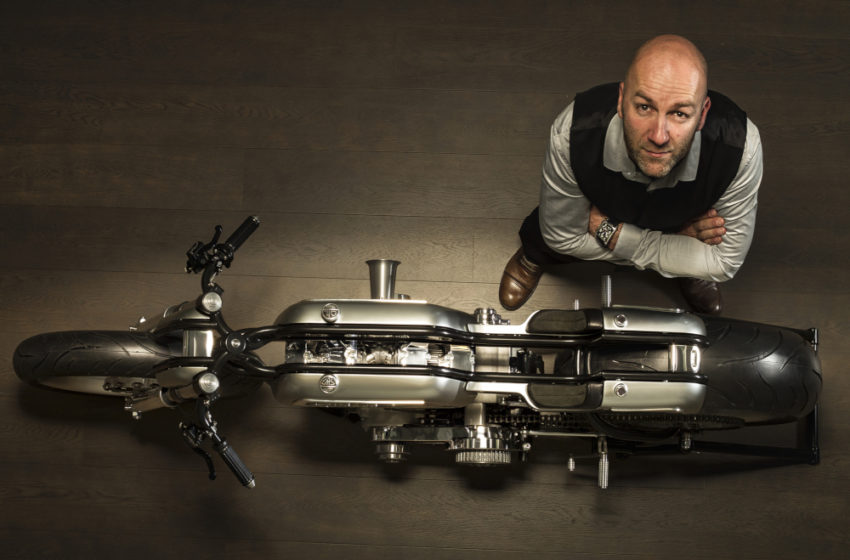 It all starts with K. Knowledge, Koolness and off course Kustoms and that doesn’t start without him. Ladies and Gentlemen Fred Krugger it is.One of the most stylish guy known on the custom scene and not to mention so are his customs on the entire planet.

For any builds that you look upon it has accolades attached to it. That’s the way he has build them with more versatility and with tremendous zeal.Now that doesn’t stop him from making custom cars as well and they go by name ” Rebellion” and “Project FD” .

Legend says Krugger takes inspiration from parallel universe well i say he has his own rich style of building customs since he started building them.Everything starts from his mind.

Here is my talk with master magician who already had cast his spell on the custom world with his powerful and innovative builds that always make the tabloids talk about him and why not.

1.How did you develop interest in motorcycles?

Fred : I started riding at 4 , was a part of motocross race at 7 , and end of my career at 18 years old with a few  national title in my pocket.

1989 was end of my career in motorcycle racing with two titles of Belgium’s champion in Enduro (7 years in motocross and 3 years in enduro , endurance offroad) .

In the same year i ended my studies in electro-mechanics (just one month before the diploma ) after a squabble with the headmaster.

2.What challenges do you face while building custom motorcycles?
Fred : Innovation, design and quality build but mainly innovation.

3.Is there any particular custom motorcycle which you had build and is close to your heart?
Fred : Goodwood because i made it run on the saltflat , beat an american speed record and one month later , I won the Artistry in Iron Las Vegas ! Best memory ever.

4.What is your ultimate goal?
Fred : Always push the limit of mechanical innovation is a good goal …but quality to live with the family is better.

5.How do you come up with so innovative designs of custom motorcycles?
Fred : Because I love challenge.

6.Do you think the custom market has changed as compared to 80s or 90s?
Fred :Not really , except at the time it was only around Harley and now there are a few other brand (Triumph, Indian, …) That’s wider now.

7.How do you start building the custom.I meant what is more important is it the idea or final output?
Fred : Compromise between ride-ability and design .

8.Is there a plan to build any Electric Motorcycle?
Fred : Yes, since a long time, but I’m overbooked.

Lets take a look at some of his work.

NURB is a mathematical word that means “Non-Uniform Rational B-spline “.

This is called as Nurb a BMW K1600 that Fred turned into a innovative model.What does it has.Well you cannot think even.

The machine gets six cylinder, adaptive headlights and has multiple ride modes for a rider to make it more adaptable while riding it. It weighs around 317 kgs which is 700 pounds.

The wiring is complicated however it is spun very well by our master magician.Front suspension is modified in a great way.The paint scheme used is one color on the machine that is simple yet attractive making the machine looking more futuristic and indigenous from other world.

If you observe the main tank is underbelly that is under the seat.Braking responsibilities are taken over by Beringer brakes on this machine.

Result the entire package looks sumptuous and class and that has even  helped him win ” World Champion of custom bike building AMD Koln ” back in 2014. Seen here are pictures of Fred standing wearing Krugger jacket and a lady with a chequered flag its a theme of ” Race” but that doesn’t steal the show away from the custom Triumph Bobber made by Fred. For Fred the timeline was a real challenge for this build but he managed to do it very well within the given span of time.

What changes in this creative custom?
Size of the is fuel tank is increase from lowly 9 liters to 16 liters for adaptive longer journeys.To make the stance lower than the original machine Fred had to compress the forks by an inch. Fred made another huge change of extending the wheelbase .

Tire duties are performed by Dunlop and Sportmax which is supported by wheels of size 18-inch Arlen Ness alloys 3.5 at the front, and 5.5 at the back.It also gets Arlen Ness disc brakes.

This by far seems to be a simple build with minimal custom however that also shows Fred Krugger capable of turning simple iron into gold.

This eye catchy simple yet attractive build was made in 2009. Configuration of Overmile is supported with  (1700cc) S&S V-Twin mated with 6-speed baker powerbox with a overdrive.The elegant design comes with white color paint scheme with a black strip that covers the mid section of the fuel tank.

The little wide handle tapered handle bars with the stylish black seat for rider makes the stance more comfortable.It does have small metal disc brakes, at a first impression you may not be able to see them but it does get the disc brakes. That again is one of the best functionality that has been integrated in this build.

Twin exhausts are on the left side with black paint scheme on them with mid size Krugger name mentioned on the tank.

The height of the bike is generous enough to make it a mix of naked street with cruiser style custom.